Students were evacuated after smoke spread throughout Crawford House from dryer fire. 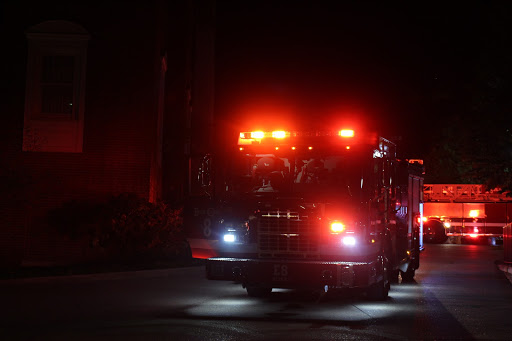 At approximately 9:20 p.m. CDT on Sept. 27, a dryer at Crawford House caught fire leading to a full evacuation as smoke filled the building.

“We got on the scene and discovered that we had a dryer that had caught fire with some clothes in it, and smoked everything up,” Bates said. “We were able to extinguish the fire, which wasn’t much, but we do have a bunch of smoke in the building. What we are doing now is attempting to ventilate the building and remove the smoke.”

Bates added that, generally, it’s necessary to clean lint from the ductwork and that this may have been the cause of the fire.

Prior to smoke detectors and fire alarms sounding, students became aware of the incident via group chats.

“A text in our Crawford group chat said if your clothes are in the right bottom dryer, they are burnt to a crisp,” first-year Alexanne O’Dell said. “I walked down to investigate. I walked in [the laundry room], and the smell was so bad.”

According to O’Dell, the fire alarm sounded after a police officer attempted to tame the fire with an extinguisher.

“A [police officer] came down and opened the door, and there was so much smoke. She got a fire extinguisher and tried to put it out, and then the fire alarm went off,” O’Dell said.

The alarms forced the Crawford residents to evacuate the building and gather outside the Commons Center. Danielle Wilson, a first-year living on floor three of Crawford, noted the house had been evacuated twice before due to what she believed to be complications in the steam room.

“We walked down here because we knew the routine from last time,” Wilson said.

Students continued to wait for the all-clear in front of Commons Center and around the house. Bates assured students that they would be able to get back in the building shortly.

“We put it out easily; it just made a little bit of a mess with the smoke. We’ll have it out in no time,” Bates said.

Crawford residents were allowed back into their building at around 10 p.m. CDT on the night of the fire. Residents were also informed via email at 10:33 p.m. CDT they would have to use Sutherland House’s laundry rooms until Oct. 6 while “machines were assessed and replaced for residents’ safety.”

In an email to The Hustler, Julia Jordan, a Vanderbilt media representative, said that a faulty dryer caused the fire and highlighted the subsequent week-long maintenance period.