DivestVU calls for end to Vanderbilt investment in fossil fuel

Vanderbilt students have taken up a new campaign to have the university divest from fossil fuels. 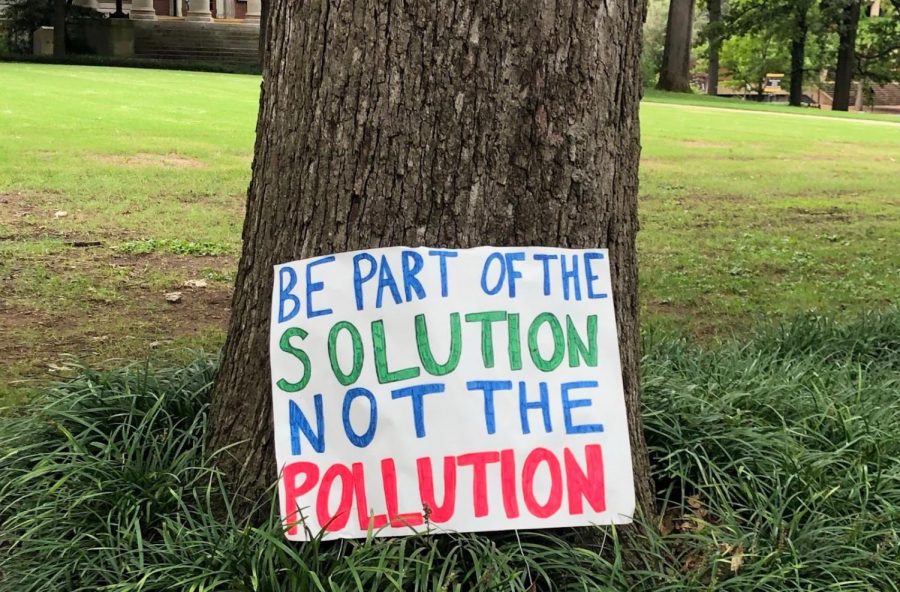 DivestVU is a new campaign led by Vanderbilt undergraduate and graduate students to pressure the university to divest from fossil fuels.

This movement is not an isolated incident at Vanderbilt alone. In fact, students and climate activists across the country have taken up similar campaigns to encourage their respective universities to divest from fossil fuels, many of which have seen success. While Vanderbilt’s movement began at the start of the fall semester, movements at other colleges across the country began in the early 2010s. Vanderbilt’s campaigns manifested in the form of two organizations: DivestVU and Dores Divest.

“Two movements emerged at the same time,” co-founder of DivestVU Emily Irigoyen said. “It just goes to show that it was bound to happen. People want change.”

Since then, Irigoyen said the two organizations have unofficially become one group with a singular message: to pressure administration, alumni and the Board of Trust to remove all assets in Vanderbilt’s name regarding fossil fuels. The campaigns call for divesting Vanderbilt’s endowment from the fossil fuel industry and features a 350-signature petition for students, faculty and alumni.

Irigoyen said that Vanderbilt has listened to previous student-run campaigns in the past regarding changes to limit the contributions the university has on climate change. For example, under Chancellor Zeppos, an organization made by graduate students encouraged the university to go carbon neutral by 2050.

“Vanderbilt has shown that they have been receptive to student campaigns in the past,” Irigoyen said. “And they have shown that their financial power means something and the money they invest into institutions has significance.”

According to Irigoyen, divesting from fossil fuels has both environmental and financial benefits for the university, as renewable energy is a more sustainable long-term investment than fossil fuels.

Irigoyen leads the event planning committee of DivestVU. Their latest event was a poster demonstration on Sept. 25. This event took place during the Global Climate Strike, an annual event that coincides with Greta Thunberg’s Fridays for Future campaign.

“Because of COVID-19, we are having a remote climate strike,” Irigoyen said.

This event featured 50 posters placed around campus with a cluster on Alumni Lawn in an effort to draw more attention to their campaign. There was also an option for remote students to get involved by creating their own posters and sending pictures which were posted on the DivestVU Instagram page (@divestvu).

First-year Trent Bohan noticed the posters and thought that it was a good way to get the word out.

“Divestment is definitely a great cause, and it is going to need a lot of attention to get it done,” Bohan said.

Assisting with the demonstration was Dores Divest, a movement with the similar goal of putting pressure on Vanderbilt to divest the endowment from the fossil fuel industry.

PhD student and former Communications Professional for the US Environmental Protection Agency (EPA) Miguel Moravec helps manage the Dores Divest Instagram page (@dores_divest_), which he says is one of their main methods of viral activism.

“We find that mixing memes with activism promotes the best campus community engagement for our 1,100 followers,” Moravec said in an email to The Hustler.

One recurring sight on the page is that of Handsome Ron, who is a bird wearing a pink cowboy hat.

“Handsome Ron is an adorable, red-breasted Robin that attends Vanderbilt University. Also, we are all Handsome Ron. I really can’t comment further than that,” Moravec said.

One publicity stunt organized by Dores Divest was the setting up of fake QR codes in Commons Dining Hall. The codes that normally take students to the dining menu were covered with codes that led to the petition for divestment.

With growing support, the new movements look to the future, and Irigoyen hopes that soon they can talk directly with Chancellor Diermeier and the Board of Trust in order to get the university on board with divestment.

“[DivestVU and Dores Divest] have been working collaboratively to catch Vandy up to the many other top universities that have already divested their endowments from fossil fuels,” Moravec said.

What these organizations have achieved since the start of the semester demonstrates the urgency to act on climate change per Irigoyen.

“People are starting to realize that this abstract term of climate change has real world effects and it could ultimately kill people and injure homes, economies and communities,” Irigoyen said.