Q&A: Nobel Laureate in Chemistry Dr. Frances Arnold speaks to The Hustler about her inspiration and advice to students

Dr. Frances Arnold was awarded the 2018 Nobel Prize in Chemistry for the directed evolution of enzymes. 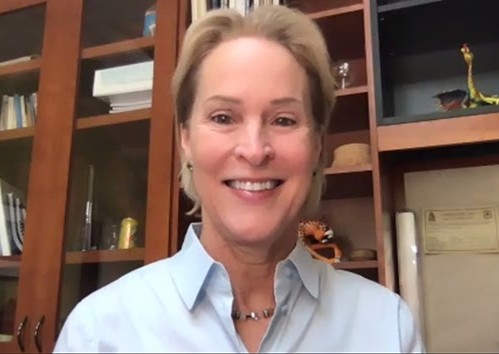 On Sept. 15, Dr. Frances Arnold, a Nobel Laureate in Chemistry and the Linus Pauling Professor of Chemical Engineering at California Institute of Technology, gave the fall John R. and Donna S. Hall Engineering Lecture to over 700 participants over Zoom.

The lecture covered the concept of directed evolution, for which Arnold was awarded the 2018 Nobel Prize in Chemistry. Directed evolution uses lab technologies that create mutations in a pre-selected gene. These genes are then used to manufacture the mutated enzymes, which are then tested for function. Enzymes that help facilitate the reaction are selected and the process continues until the scientist is satisfied with the results.

The Hustler spoke with Dr. Frances Arnold on a Sept. 15 Zoom call about how she overcomes roadblocks, what inspires her and her advice to students.

Vanderbilt Hustler: What is a concept that still amazes you to this day?

Dr. Frances Arnold: Evolution, I think it’s amazing that such a simple engineering process can solve such complex problems. We’re just at the beginning of this whole idea that you can reprogram the biological world, and use evolution to do it. It’s mind-boggling. You’re lucky you’re young. You’re going to see such incredible advances, such amazing things that you can do with biology.

When you face a roadblock in a project, what is the first thing you do?

It depends how big the roadblock is. If it’s an important problem, and I’ve got to get over it, I find other ways to solve the same problems. Just as often I say, ‘it’s not really worth getting over that roadblock, let’s turn right and see what’s over there.’

Especially for engineers, this is one of the treasures of being an engineer. We’re trying to make things that nobody has made before. We’re trying to understand where we can go with, say, reprogramming the biological world. So, if you can’t do one thing, there are 500,000 other things that you can do, so I think it’s important to adapt to roadblocks.

Could you talk about what motivated you to go into chemical engineering? You got your undergraduate degree in mechanical engineering and aerospace engineering at Princeton; what guided you after you had that strong foundation?

When I was a mechanical engineer, I wanted to engineer the most complicated things on the planet, and to me, that was an airplane or rocket ship. I took this job in Brazil and was looking at ethanol fuels and engineering something like biofuels. I realized that human engineering complexity is the tiniest fraction of the complexity of the biological world and not nearly as elegant. I love how a bird flies. There are very different solutions to the same problem, but the biological solutions are so amazing.

So, I decided to go into chemical engineering as a graduate student, mainly to try to do biofuels research, but of course, that was the end of that. Reagan was the new president. Cars were getting long again, and no one cared about energy efficiency. But it was the beginning of the DNA revolution, so I said, ‘there is a whole new world of biological engineering that I’m going to be part of.’ Chemical engineering was a great way to combine chemistry, biology and engineering.

At that time, was chemical engineering fairly separated from the biological sciences?

Chemical engineering has a long history of dealing with biological processes, but they weren’t doing it using genetic engineering, they were doing it at the process design level— ethanol plants and agriculture and food science and things like that. But what happened starting in the later [19]70s and early [19]80s is that these new techniques of recombinant DNA technology started to become available.

What do you see as the future of the enzymes you are making?

I dream of the day that all the synthetic chemists will be replaced by bacteria. (laughs) It makes me popular in the chemistry circles. Think about it, if you could just genetically encode all these transformations, you could take renewable resources to anything you want.

You worked at the forefront of the variety of disciplines, chemistry, biology, engineering as well as agriculture. Is there anything you are more interested in learning more about?

I’m learning more about everything everyday. I take on new jobs, I’m on the board of directors of Alphabet [Google parent company], so I’m learning about antitrust suits. The world is a fascinating place. There’s lots of science, but there’s lots of other interesting and important things to learn about. I’m always listening to seminars and getting ideas, it never stops.

Beyond science, in college, what were some of the things that formulated the perspectives you have today?

That was my problem. I became a mechanical engineer because that had the fewest number of requirements. Then I could take Russian, Italian, French, economics and development. At Princeton, it’s a very liberal arts school, but also a good engineering school. I was able to learn a lot of different things and explore different ideas.

I think that’s very important as a young person because you never know where your inspiration will come from. I also took a lot of time off. I lived in Spain, Italy, Brazil. You never know when something is going to be useful to you later on.

One problem with the educational system is that it is more eye-closing than eye-opening.

How are you able to go beyond calculations and keep an open mind in the sciences and engineering?

All I have to do is remember all the people who told me that what I was doing was a total waste of time. One group said it was impossible; another it wasn’t worth doing anyway. These were top scientists, and they really thought they knew. So, I think we all should be humble in thinking what is worth doing and thinking we know the answers because all sorts of crazy surprises come up.

I love teaching my biomolecular engineering class. I have a debate with a rational designer, another faculty member at Caltech, who rationally designs complex molecules and I am the evolutionist. We just throw tomatoes at each other across the room, and students love it. They see the debate in real-time and then they have to make a decision of who is right and who is wrong. Are they both right? When do I use one method versus the other? That’s a fun one.

Do you look more to biology or chemistry when facing a problem?

It really depends. If we are looking for new chemistry to do a chemical reaction that a human has invented, you start with chemistry. What is the mechanism? Is there a protein that looks remotely like this? So, you are inspired by the chemistry. On the other hand, if you want to understand how evolution works, there is no chemistry in that. It is much more in the biology side.

I run a big research group now and almost all the problems are brought in by students and postdocs. My job is to be an editor of ideas rather than the generator of ideas. They are all going to have their own training and way of looking at it and I try not to close their eyes.

At what point did you become interested in preserving the environment?

I was already interested in alternative energy coming out of college. That was part of the environmental problem, but it was more about stability and sustainability. How can we become independent from the Middle East? So, it was also political. As my career has gone on, I see the tremendous destruction that we are doing to the planet. It just becomes worse and worse, so I have become much more interested in trying to limit environmental degradation.

How are you able to carry out such wide-ranging projects?

They are not my ideas. The insect pheromone (Provivi) was my former students’ who said, ‘I want to take these methods I learned at Caltech and use them on a really important problem.’ So, that came out of that. That is the wonderful thing about having a technology that is simple to use. Directed evolution is really simple and fundamentally powerful.

All sorts of people will use it for really interesting things, and then I can take at least some tiny amount of credit. Evolution is everything in the biological world. It is not surprising that it has many applications in biotechnology.

How did you get interested in teaching and what inspires you to continue teaching?

I wanted to have no boss. That was the driving force to get me into academics. I have had lots of jobs over my lifetime, and the one thing I really didn’t like was having a boss. I went into academics so that I could do what I was interested in. It is a lot of responsibility because you have to do something interesting, otherwise you get booted out.

I wanted to plot my own course. I probably wouldn’t have chosen to teach, but I really like working with grad students. I like working with a team and I learned how to do that over the course of my career, so that teaching became more enjoyable as I got better at it.

Do you have advice for undergrad students pursuing engineering or chemistry?

I’d like them to know that the horizon is wide open. The field is wide open. There is so much more to do and discover. It is a great way to use your creativity to solve big problems—to do something good for the planet.