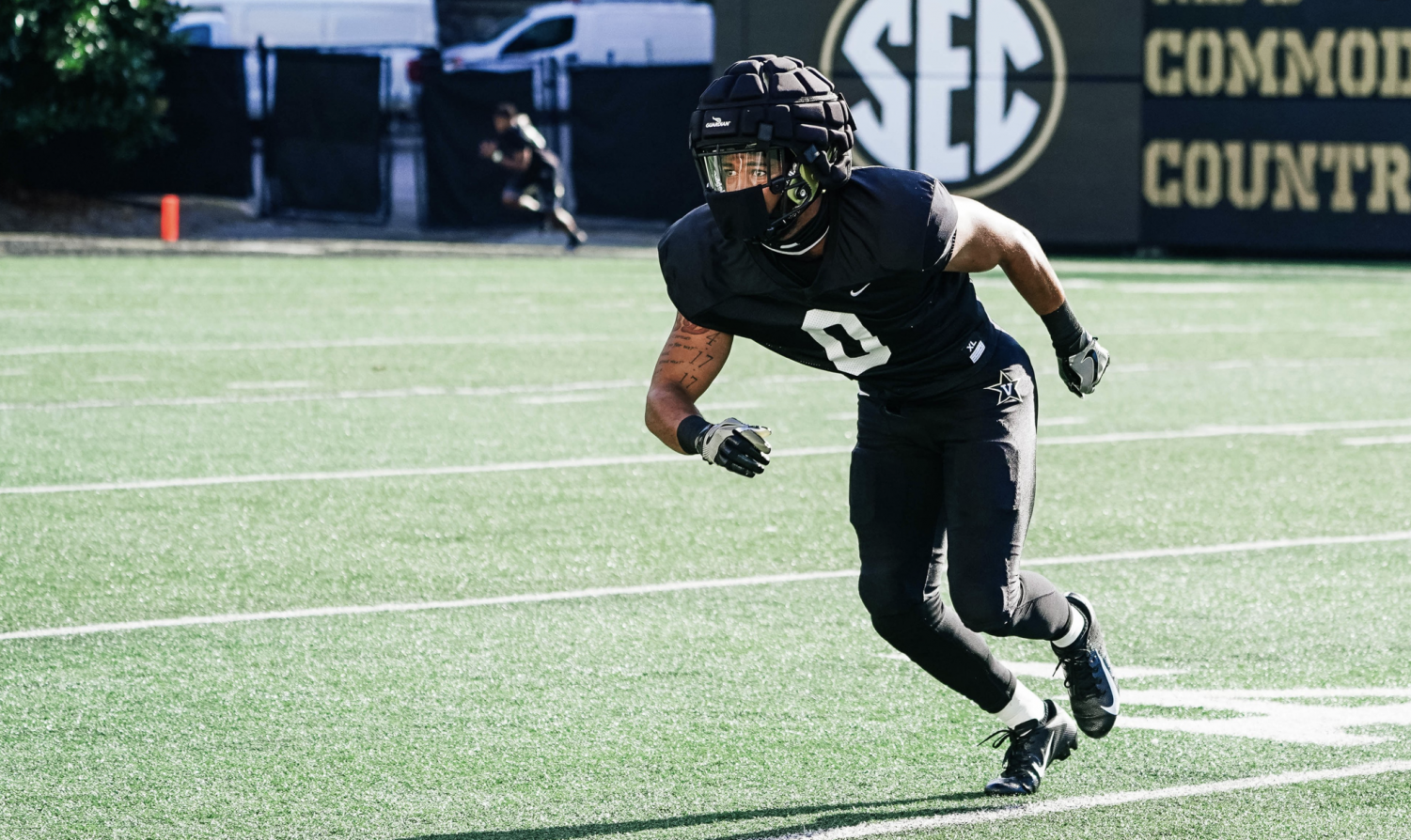 A year after his second career ACL tear forced him to miss all but two games, fifth-year safety Frank Coppet is back on the field in 2020, hungrier than ever to make a big impact on the Commodore defense.

Coppet tore his ACL during preseason camp last year. However, instead of immediate surgery, Coppet began rehabbing it with the tear still in place in hopes of quickly returning to the field. He missed the first two games of the year but returned to play against LSU on Sept. 21, torn ACL and all.

“After I tore it, probably about two or three days later, I told the trainers I wanted to play on it,” Coppet says. “[The trainers] were with it. The doctors allowed it, so we went for it.”

Unfortunately for Coppet, that did not last long. He started the next two games against LSU and Northern Illinois, recording a tackle in each. Against the Huskies, however, the soreness in his knee worsened, and Coppet came to the difficult decision to have season-ending surgery.

The rehab process was long and lasted up until a couple months ago, but Coppet has had worse. He found some solace in the fact that this recovery time wasn’t as lengthy as his first one.

His ACL tear during his freshman year resulted in damage to both his MCL and meniscus, making for a much more grueling rehab process. This time around, Coppet was able to start walking and putting heavier weight on his knee much quicker.

Now, Coppet is one hundred percent cleared and is enjoying every second of being back on the field.

“It feels great,” Coppet says of playing again. “I get to do something that I love to do. Sitting out for a year, it just wasn’t the same. It’s just great to be back out on the field with my boys.”

Make no mistake: the Commodores are expecting big things out of Coppet this season. He had an impressive junior campaign, starting six games and recording 30 tackles, along with a forced fumble. Coppet also had three interceptions, the second-most of any Commodore that season.

In addition to his stellar play, Coppet is an incredibly respected voice in the locker room.

“A lot of the guys look up to me,” Coppet says. “They value my word and my perspective on how I handle things. I go out on the field, and I don’t do too much talking. I just get straight to the action, and those guys tend to follow that role.”

This sentiment is echoed by head coach Derek Mason.

“Frank Coppet is the heart and soul of this defense,” Mason says. “He’s been around here a long time. He’s had to overcome two ACL surgeries. He’s the smartest guy on the field when you talk about being in games and having experience. Coming from St. Thomas Aquinas, he’s always been a soldier. He truly understands the game; he’s a coach on the field.”

The trust that Mason has in Coppet stems from their five years together as player and coach.

“We’ve been together a long time,” Mason says. “Frank sort of reminds me of really what I would want in a young coach, except he’s still playing. The idea that he’s gonna hold guys accountable; he’s gonna tell guys what he sees.”

The relationship between the two has been just as important to Coppet and his development both on and off the field.

“Coach Mason is my man,” Coppet says. “He’s like a second father. He’s always giving great advice. He’s always pushing me to my limits, which is exactly what my dad would do. I look up to Coach Mason a lot; he’s a great man to be around.”

This season, the fact that he has two healthy knees is not the only reason that Coppet will look a little different on the field. Thanks to a new NCAA rule allowing players to wear number zero, Coppet will become the first Commodore in history to sport the number on the back of his jersey.

For Coppet, the number change was appealing because he had the chance to be the first one to do it and also pay homage to his roots as a player.

“I wore number zero as a child in little league football, so it just brings back a bunch of memories for me,” Coppet says.

He may be wearing zero on the field but look for Coppet to be a hero for a Vanderbilt defense that begins the season with pretty high expectations.

In the words of Mason:

“It’s fantastic to have Frank Coppet back.”