First-year defensive coordinator Ted Roof spoke to the media on Tuesday for the first time since preseason camp began. 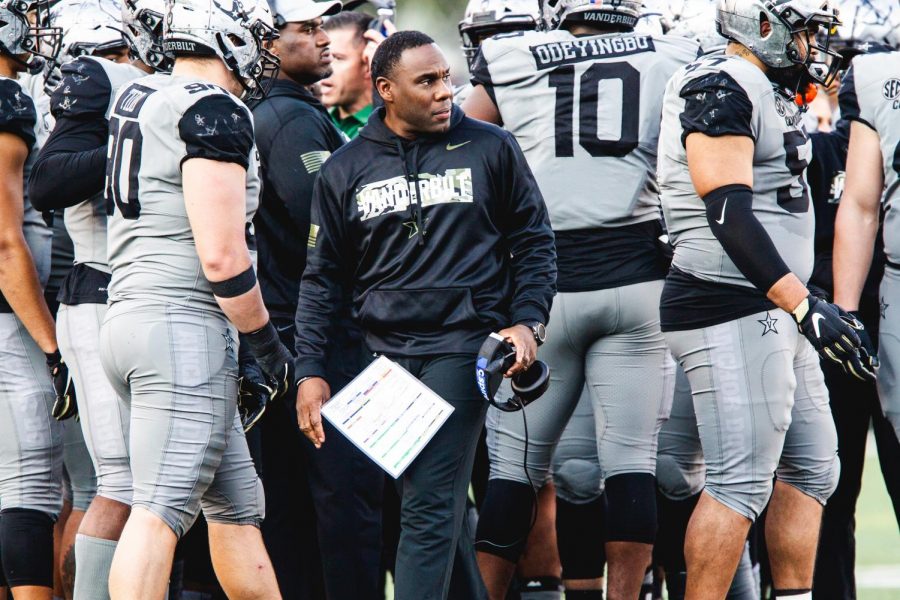 Given Derek Mason’s three-year stint at Stanford—one as a defensive backs coach and two as a defensive coordinator—prior to his hiring at Vanderbilt, it should come as no surprise that Mason is a defensive-minded head coach.

This year, though, Mason’s seems giddy about his defensive unit—and understandably so. The Commodores return all 11 starting defenders, including star defensive end Dayo Odeyingbo and projected NFL Draftee Dimitri Moore.

With so much returning talent, there remains only one change in Mason’s defense; albeit a substantial one: the firing of former defensive coordinator Jason Tarver and the hiring of Ted Roof.

“It has been a bit of a balancing act,” Roof said about balancing Vanderbilt’s old defensive strategies with his new playbook. “But we’ve had enough practice now where we’ve got a good feel for what guys can do and make sure we put them in the right places so they can be successful.”

Mason commended Roof’s ability to integrate these new concepts while also upholding old values, something in which Roof excelled during his short tenure at Appalachian State.

“When Ted went to App. State, he did a good job of taking some tools there and implementing some of his own,” Mason said of Roof. “And he’s done the same here. He’s taken some of our tools, he looked at some of the defenses that he thought were similar and had some carryover, and brought in some of his own stuff.”

Roof, who spent one year as the defensive coordinator at Appalachian State prior to his arrival, addressed the media on Tuesday for the first time since preseason practice began. Roof thrived in his short stint at App. State: his defense ranked in the top 25 nationally in points per game (20.0) and total yards per game (336). But perhaps the strongest facet of his defense, an area in which they ranked top 10 nationally, was its ability to hold opponents to a meager 30.7 percent third down conversion rate.

His secret to third down success?

According to Coach Mason, Roof should have plenty of playmakers with experience battling one-on-one coverages in the SEC.

Despite the excess of experience, Roof has not grown complacent. He expressed a clear sentiment towards developing defensive depth, especially in a year plagued with uncertainty.

“What we’ve got to be able to do is play some rotational guys. We’ve got to play more people because of what’s happening across the country with the situation everybody’s in,” Roof said. “Teams with depth usually perform better at the end of the season than teams without depth because going through this league, this league is a grinder. It’s going to take a toll on your body.”

Roof conveyed a team-first mindset; he wants to trust every defender in the rotation, rather than just relying on star talent. Evidently, the same applies to his coaching—Roof wants to lean on Mason for help, given his extensive background as a defensive coach.