FELLAS: Don’t cancel your professors with a tweet: talk first

Engaged discussion is how we learn where we truly stand. 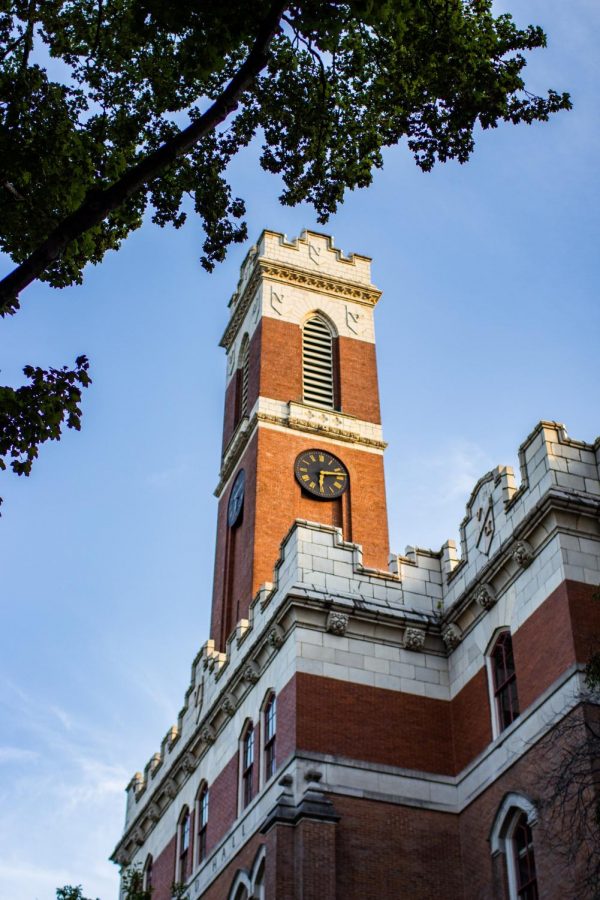 Kirkland Hall is home to the offices of many Vanderbilt professors. (Hustler Multimedia/Emery Little)

A liberal arts education is about widening one’s perspective, expanding one’s tolerance of divergent opinions and thinking critically about ideas. Colleges and universities like Vanderbilt that profess a liberal arts ideology encourage students to take ownership of their education and respectfully argue about their beliefs.  Emerson College student Morgan Harris misapplied these ideals when she tweeted a private email from one of her professors explaining his syllabus and criticized him for what she perceived as a lack of racial diversity in his reading selections. As of Sept. 13, the tweet has amassed over 36,000 likes since she posted it on Aug. 29.

Similarly at Vanderbilt on Sept. 3, an anonymous student taking U.S. Elections, a class that covers the 2020 presidential race as well American political history, complained to Young America’s Foundation, a conservative organization, when their quiz asked the following question: “True or False: Was the constitution designed to perpetuate White supremacy and protect the institution of slavery?” The story has since been picked up by other right-wing news outlets, like Fox News and The Federalist.

I am not interested in addressing the merits of the Emerson professor’s syllabus or the legitimacy of the U.S. Elections quiz here. Instead, my objection is to the response of the students, who didn’t put their liberal arts education to good use, didn’t respectfully challenge their respective professors or work within the channels of their respective institutions.
Instead, the students, targeted them publicly on the internet, allowing the story to get distorted and sensationalized.
Harris had written her professor an email asking about the syllabus, to which he responded with an overview of the titles and the pedagogical considerations that led to his decisions. However, when she took issue with his response, instead of following up, leaving it to the dean, dropping the class or even posting about her experience with the intention of getting suggestions for how to proceed, she breached the implied privacy in a personal email and shared his words, name and place of work with everyone on Twitter.

And while she claims she didn’t expect the tweet to blow up, she also asked people to “keep sharing” it in a subsequent tweet, suggesting that she enjoyed the attention it brought her and the public shame it brought upon her professor. Worse still, because of the wide dissemination and informal nature of Twitter, her professor has no viable way to respond and just has to accept the onslaught of hate in the replies. Harris had complete control over the narrative, even choosing to not to share her initial email to the professor, which would have provided the context necessary to assess his response.

The student could also have posted their feelings as a discussion post, a tool that the class regularly uses. While they may be met with pushback from other students, those who publicly express an opinion open themselves up to feedback from others. In choosing to be anonymous, the U.S. Elections student was shielded from any criticism, leaving the professors to brave attacks that questioned their integrity and ability to teach the course, given their respective political affiliations. The Federalist cited professor Jon Meacham’s recent speech at the Democratic National Convention, to that end.

Again, the student’s public complaint about a single question from a quiz was made without providing any information about the course or class discussion that preceded the quiz that might have placed the question in context.

My point is not that students cannot disagree with their professors. That would be counter to the ethos of a liberal arts education that promotes learning through discussion and critical thinking. Some professors mistreat or cross professional boundaries with their students, and we must encourage students to feel comfortable to speak up in such circumstances. And while some students may have legitimate reasons for feeling discomfort in challenging a professor, there are people and resources available on campus for these situations; resorting to anonymously approaching outside news outlets is not one of them.

But when disagreements about ideas arise, students should be encouraged to respectfully advocate for themselves and their own views, rather than amassing an army of Twitter followers or external media companies to publicly shame their professors on their behalf. Instead of rushing to Twitter to “cancel” our professors or complaining anonymously to news outlets, let’s use college as the time to hone our argumentative skills, meet people who see the world differently than we do, respectfully disagree with them through engaged discussion and build confidence in our values.

Public attacks on professors such as these will inevitably have a chilling effect on their willingness to express ideas that students might consider controversial or unorthodox and stifle debate at academic institutions. Isn’t the point of an education, after all, for us to question what we think we already know, to listen to ideas with which we disagree, to consider and discuss them and perhaps even change our minds?