Separated from life on Commons, first-year students living in Carmichael Towers search for community and a campus identity. 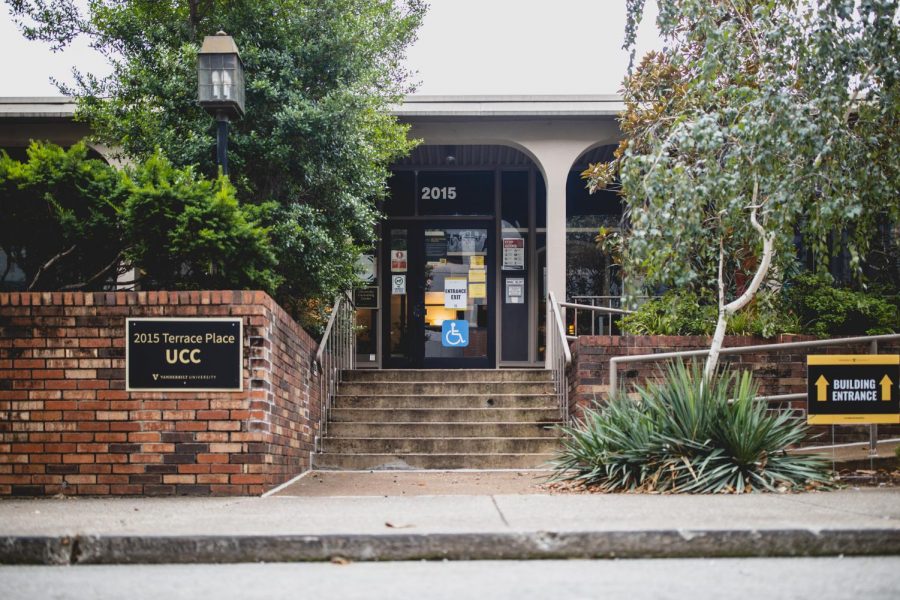 The University Counseling Center (UCC), pictured above, urges students to reach out if they are "feeling anxiety or stress related to the coronavirus" according to its website. (Hustler Multimedia/Hunter Long)

This article has been updated to reflect the fact that Marissa Tessier is a writer-in-training for The Hustler.

In the midst of an unprecedented fall semester, members of the Class of 2024 are living off the Martha Rivers Ingram Commons, with many spending their first semester in the Carmichael Towers East or Branscomb Quadrangle.

Vanderbilt’s Carmichael Towers complex includes two 14-floor high-rise buildings with 18 single rooms and four doubles on each floor, with common bath facilities located at the center of the hall. In order to comply with COVID-19 regulations and reduce density in living spaces, all first-year students were assigned to rooms without roommates.

The controlled implosion of Carmichael Towers West last year set the stage for new developments in the West End neighborhood, including the construction of new residential colleges as part of the university’s FutureVU plan. Although Vanderbilt had planned to close the East tower after the 2019-20 school year, the university’s plan to de-densify housing in response to the COVID-19 pandemic necessitated the use of Towers to house students this year.

First-year students assigned to Towers during the randomized housing process in July were assured that housing assignments would switch at the transition between the Fall 2020 and Spring 2021 semesters, guaranteeing they would also get to experience life on the Commons.

First-year Towers resident Marissa Tessier stated that she and others who were randomly assigned to Carmichael Towers were initially disappointed and felt that they are at a disadvantage in making friends from Main Campus. Tessier is a writer-in-training for The Hustler.

“The only thing in my mind was not Towers,” Tessier said. “I opened the email and thought why me? I wanted to live in the Commons.”

First-year Towers resident Kurt Urban said he had a similar reaction when he saw his housing assignment and continued to feel disappointed when arriving on campus and moving in.

“It feels very disadvantageous for us to live in towers in terms of acclimating and finding connections,” Urban said.

Tessier stated that her perception of Towers was influenced by reports that the East Towers had been scheduled to close as well as rumors from upperclassmen and fellow first-years of insects and sanitary concerns. Before coming to campus, first-years assigned to Towers created a GroupMe with the name “Roach Tower,” and urged peers to bring roach repellent to campus. Tessier said this played a role in her negative perception of Towers.

“My initial reaction was so negative,” Tessier said. “I’d heard many negative things about Towers. I mean, I’d heard it was going to be torn down, so why would I want to live there?”

Several first-years were surprised to find items from former residents in their Towers rooms during move-in.

“I found an old pair of underwear and leftover Juul pods hidden in the creases of the floorboards, all over my room,” Tessier said. “I just turned to my mom in shock.”

An additional concern for incoming first-years was Towers’ history with roaches in bedrooms and stairwells. First-year Towers resident Alexander DeLoach recounted his experience regarding an insect incident in Carmichael Towers East early in the morning.

“This happened at approximately 2:30 a.m,” DeLoach said in a message to The Hustler. “All of a sudden, a little roach crawled around a corner and onto my foot!”

During Resident Adviser Katlyn Richardson’s mid-morning interview with The Hustler, the construction noise from outside was so loud that the interview had to be temporarily paused.

Despite not living on Commons during their first semester, all Towers first-years have been promised support from Residential Experience Coordinators, Graduate Area Coordinators and Resident Advisors. Additionally, all first-years have been assigned a virtual roommate, encouraging connections with peers across campus to foster a sense of community.

“This is such a hard year to come into college,” Richardson said, “It’s so challenging to engage the same way we would in the past.”

Most students in Towers currently live in single-occupancy rooms, which are smaller than their peers’ rooms on Commons. “It’s easy to feel so alone,” Tessier said. “There is a sense of isolation and loneliness because there is no roommate.”

Tessier reflected on feeling shut-off from the rest of the campus due to online classes and her single room.

“Almost all of my classes are online, and it’s much harder to get to know people through Zoom where you can’t make a personal connection. You can’t have those side conversations.” Tessier said.

According to Richardson, advisors had to go through two weeks of virtual training with Commons staff to prepare to welcome first-year students. While she recognizes the training was helpful, Richardson also said she worried about freshmen traveling from out-of-state or arriving at Vanderbilt without knowing anybody.

“It’s already tough to be a freshman at a college like Vanderbilt, but with all of the COVID limitations, it’s just so much harder,” Richardson said.

Despite the initial hurdles faced by members of the Towers community, many students have expressed a heightened sense of community with their floormates and friends in the building. Floor bonding activities, group Zumba, silent disco parties and jeopardy tournaments have helped to keep the first-year Towers community connected.

Towers first-year Tom No cited his RA and supportive floormates as being impactful in his transition to the Vanderbilt community.

“To be honest, I’m happy to be here right now, especially given the current circumstances,” No said.

Tessier, Levy and No all told The Hustler they’ve been able to find positives after move-in, citing the connections they’ve made with their floormates as helping them adjust to life at college and online classes.

“My floor community has been one of the good parts about going to Vanderbilt,” Tessier said. “We make plans together to go out and it helps me to feel connected.”

Richardson encouraged first-years to remain optimistic about their time on campus and look for blessings in disguise.

“Find things you love to do. Find a routine that works in your space, that gets you out of your room every day. I can promise you it makes things feel less lonely,” Richardson said.