Darren Ambrose caught up with The Hustler to discuss the COVID-19 shutdown and the Vanderbilt soccer team's return to campus. 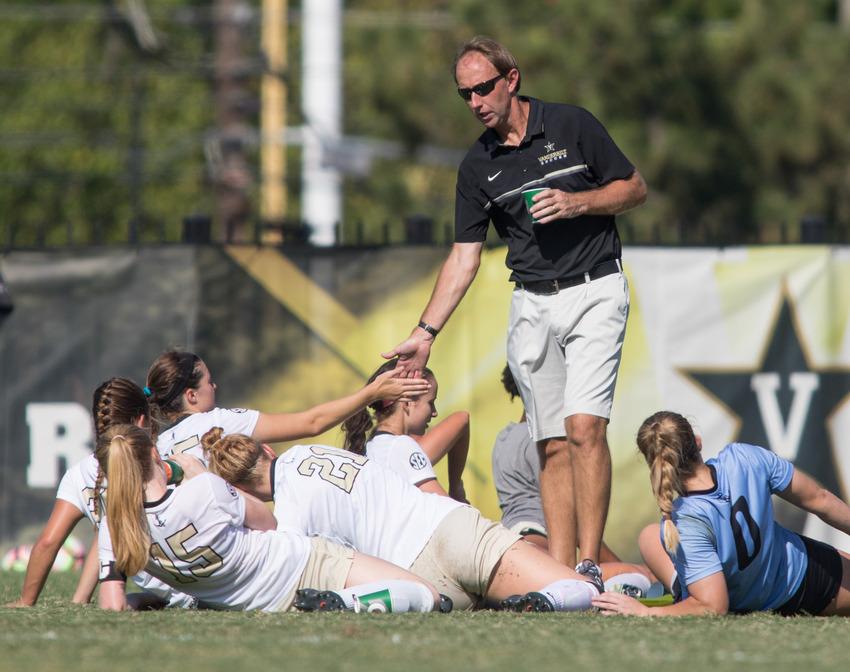 Darren Ambrose talks with the Commodores as they stretch before a game. (Hustler Multimedia/Ziyi Liu)

On March 11, 2020, Ambrose and the Commodores were practicing for their first match of 2020 against Murray State. The game, scheduled for March 14, was set to be the Commodores’ first of two spring exhibitions. It would help Ambrose gauge the talent returning to his program in 2020, and be a tune-up game for the upcoming season.

To say things went awry would be an understatement.

“It’s the strangest time I’ve had in my career,” Ambrose said. “The speed and severity of this shutdown was really strange.”

Just two days before the Commodores were set to board the team bus, Vanderbilt cancelled in-person classes for the rest of the semester, and the Southeastern Conference (SEC) suspended all athletics activities due to COVID-19. Students were sent packing—including members of the Vanderbilt soccer team.

“We told them, ‘You go home, we’ll be in touch when we know more,’” Ambrose said, adding, “I’m not the person that says, ‘Oh it’s such a shame we don’t get to play,’ my response was more: ‘this is obviously really serious. This is a world situation, and I’ve got a job. It’s probably not right to try to push the envelope to play.’”

The Commodores agreed to reconvene when they received further information. However, it soon became clear that COVID-19 would linger, further delaying their return to campus. In lieu of planned outdoor practices and spring exhibitions, Ambrose kept his Commodores busy during the shutdown with Zoom activities such as cooking classes and social justice conversations to discuss current events.

“Our girls did their best over the summer to keep in shape, but geographically they’re all in different places,” Ambrose said. “Some of them had issues with getting outside, and some couldn’t go to a field because there weren’t any open. Some tried to run at home, and it just created a lot of problems. Mentally, it’s tough to train at the intensity that you need in order to be prepared.”

The SEC announced on June 14 that the soccer season would be delayed until at least August 31, and the Commodores had to keep waiting to hear more about their impending season.

Roughly a month after they moved back into school, they finally received word on Aug. 27 that they would play an eight game, conference-only season.

“We knew in our meetings that we were working towards something because the SEC wouldn’t just throw in the towel,” Ambrose said.“They were looking at data, talking with the medical taskforce and trying to create an environment safe enough for play. They’ve handled it as well as anybody could have handled it. Time was the only thing they could use, which was frustrating, but you couldn’t make a decision back in June. You just had to push it out with the number of cases that were happening in SEC country, and patience has proven to be the right response.”

The Commodores have been back on campus since late July. Weeks ago, they played their first Black and Gold intrasquad scrimmage—something that, for months, seemed too good to be true.

“It was a surreal moment. We were playing on a Saturday night, and yet we were the only people in McGugin [athletics training facility],” Ambrose said. “We tried to say, ‘Let’s try this,’ but honestly the first game back after five months, that went out the window in three minutes. It was about, just go play. ”

Two years ago the Commodores won the SEC regular season title, and they have continued to assert their status as one of the top four in the league. That said, the circumstances preceding this season create an expectation distinct from seasons past.

“We want to get through the season. [We want to get] to November and Orange Beach [for the SEC Tournament]. We’d like to have a competitive, meaningful, fun season, because there’s so many things in the world right now that aren’t fun for anybody.” Ambrose said. “I want [the team] to test themselves, but I want it to be fun. I want us to enjoy our days.”

The Commodores will kick off their 2020 season the week of September 18, and their schedule will be released in the coming weeks.