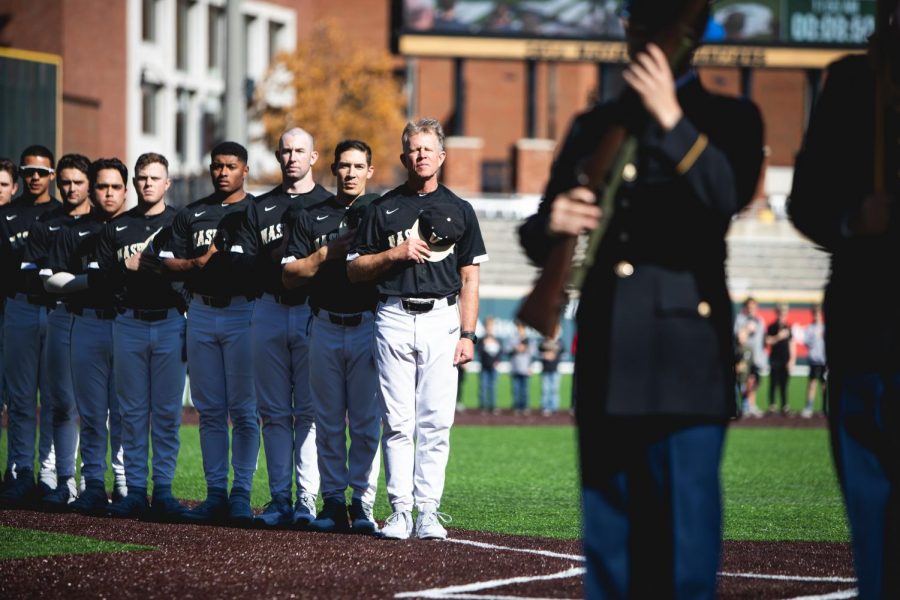 Head Coach Tim Corbin joined by his coaching staff for the National Anthem prior to first pitch.

Vanderbilt head baseball coach Tim Corbin was inducted into the Tennessee Sports Hall of Fame on Saturday night, enshrining his legacy among the greatest sports figures in the state of Tennessee.

Corbin’s 2019 VandyBoys, Kumar Rocker, Maria Bulanova and Perry Wallace were among other Commodores honored by the Tennessee Sports Hall of Fame.

Corbin, who first arrived at Vanderbilt in 2003, has amassed a 753-359-1 (.677) record as head coach while clinching 14 consecutive NCAA Tournament berths, the longest active streak in the Southeastern Conference. In that time, Corbin and the Commodores have captured two National Championships in 2014 and 2019.

After a historic 2019 season, Corbin was surprised during a midweek press conference on March 18, 2020 with news of his impending induction.

That historic run in 2019 saw the VandyBoys tally an SEC-record 59 wins, win the SEC regular season title, the SEC Tournament and a National Championship. Fittingly, they too were honored on Saturday with the Tennessee Sports Hall of Fame’s Amateur Team of the Year award.

Freshman pitcher Kumar Rocker, who famously propelled the Commodores past the Duke Blue Devils in the NCAA Tournament with a 19 strikeout no-hitter, received the Tennessee Sports Hall of Fame’s Male Amateur Player of the Year award. Rocker’s performance in 2019 saw him win D1 Baseball and Baseball America’s Freshman of the Year awards, the College World Series Most Outstanding Player award and more.

“What a tremendous honor for a young man like him,” Corbin said on Saturday’s broadcast. “To do what he did in 2019 as a young kid, and his performances with so much riding on him at the time, it’s just spectacular.”

Like Rocker, Vanderbilt bowling alumna Maria Bulanova won the Tennessee Sports Hall of Fame’s Female Amateur Player of the Year award. Bulanova, a 2020 Vanderbilt graduate, received the award for the second straight year after a senior season in which she was named a NTCA first team All-American, Southland Bowling League (SBL) first team all-conference and SBL Bowler of the Year, among other recognitions.

Former Vanderbilt men’s basketball standout Perry Wallace, who died in 2017, was posthumously awarded with the David Williams Significant Historical Achievement Award, named after former Vanderbilt athletic director David Williams III. Wallace, who was commemorated on Vanderbilt’s campus in 2020 with the designation of Perry Wallace Way, was the first Black student-athlete to play varsity basketball in the SEC.