In response to Vanderbilt’s recent statement regarding limitations on meetings and gatherings for the Fall semester, organizations on campus are preparing for the “new normal" 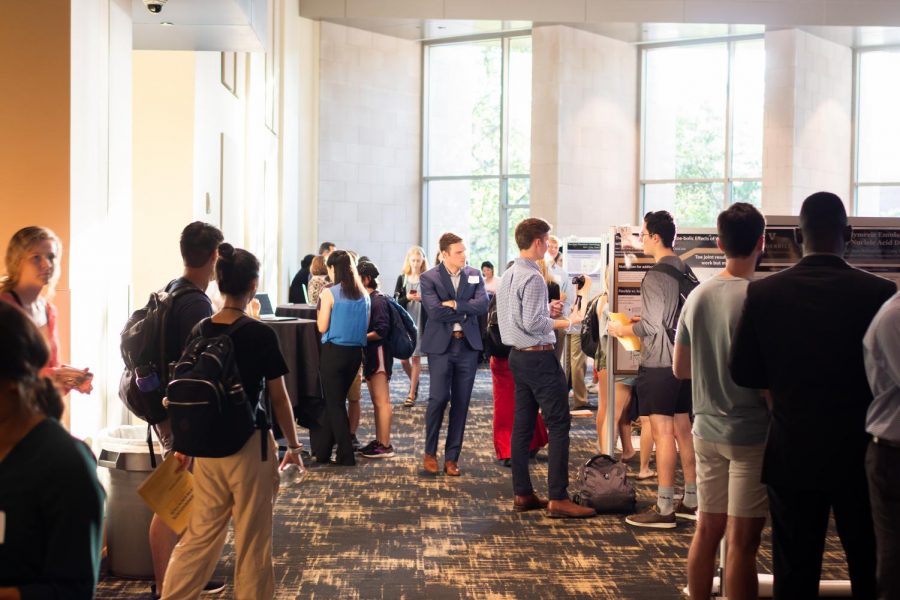 Students gather at the September 2019 Vanderbilt Research Fair to share what they learned through Vanderbilt University's Summer Research Program (VUSRP). Similar in-person events will come with plenty more restrictions in the fall as per the university's July 17 update on "gatherings."

VFor many students at Vanderbilt, school life is not defined solely by class schedules and time spent at Stevenson Library. High participation rates in a variety of on-campus organizations are part of what defines our campus culture, so whether it’s rushing to a fundraising event or attending a fraternity Chapter meeting, these frequent gatherings will soon have to adjust to a preventative “normal.”

Vanderbilt released an updated statement July 17 specifying what this change, as per the recommended social limitations of COVID-19, might look like. The statement defines a “gathering” as an event with more than one member of the VU community present or using VU funding, either as an organized social event or an activity “with a primarily enrichment, extra- or co-curricular, or community-building purpose” that is not a part of VU Athletics & Recreation, the Board of Trust or Development and Alumni Relations.

The requirements, which are subject to change, include a number of restrictions for in-person events on campus. Generally, any gathering that occurs on-campus must only be attended by those with Vanderbilt IDs and requires both physical distancing and face masks. However, things become more complicated with regard to how many students can attend these events.

According to the Vanderbilt statement, “The number of total/unique attendees may not exceed the maximum number under the university’s phased Return to Campus plan (i.e., Phase 2 max = 10; Phase 3 and Phase 4 to be defined), or the VU COVID-modified maximum capacity for the space, whichever is more restrictive.” Capacity for each meeting is expected to be managed through attendance-tracking and enforced sign-ups.

Many on-campus organizations have been hesitant to make concrete meeting plans with regard to their return in the fall, as most of Vanderbilt’s rules and guidelines are subject to change. Groups like Vanderbilt Student Government (VSG) expect most of their meetings to be conducted virtually with some variability that would be up to the individual officers, according to Speaker of the Senate Kate Petosa (‘21).

“The majority of VSG’s Senate meetings, committee meetings and cabinet meetings will be virtual,” Petosa said. “We may have three to four person subcommittee and exec meetings in-person following COVID guidelines, maybe even outside, but that is subject to change based on the officer’s level of comfort.”

Another significant challenge for these student groups is recruiting to first-years in a new, quasi-virtual school environment. Dance Marathon (VUDM) is the largest philanthropic student organization on campus, according to Anchor Link, and it depends heavily on recruiting first-years who are eager to give back. Vice President of Operations Grae Chambers (‘21) emphasized the importance of maintaining a sense of community for first-years as they adjust to life on campus, even if it has to be virtual.

“We’re preparing videos that explain who we are and why we fundraise to share with the freshman class via their class Facebook group,” Chambers said.

Quinn McCarthy (‘21), President of The Melodores, said that the renowned musical group has to get creative to work around the difficulties of not having in-person recruiting for first-years, like the Career Fair.

“We’re doing a few things to combat this, one is using the 2024 Facebook group, where we were able to share a ‘zoom’ a cappella video we made. VPAC has also made a virtual Spotlight for incoming students to get a feel for performing arts groups they may be interested in,” McCarthy said.

The Melodores will still be holding virtual auditions in the fall, however, they are doubtful that there will be opportunities to have in-person performances. The acappella ensemble is confident that they will still be able to find people who want to join the group despite the limitations, McCarthy said.

VSG will also be using their social media platforms to get the word out to a wider audience. The organization plans to hold virtual leadership workshops for students interested in running for senate positions and hopes that it may turn out to be easier for people to attend virtual meetings than in-person meetings, Petosa said.

As of now, VUDM meetings will not take place in-person. However, if guidelines change to allow more people in a room, the executive board and smaller committees will hopefully be able to do so, Chambers said. The organization is currently planning for their February “Half-Marathon” dancing event to run in-person, but Chambers maintains that they have the means to transition to a virtual event that still engages the campus if needed.

Many philanthropic organizations on campus, like VUDM, depend on fundraising for their donations. Limitations due to COVID-19 precautions bring a whole new slate of issues for their executive boards to tackle.

“For the fall semester at least, all of our fundraising efforts will be virtual,” Chambers said. “We have experience reaching out to potential donors on Facebook, Instagram and Venmo, but we have lots of creative ideas to push this to another level. This has been a financially difficult time for so many, but it’s as important as ever to support children’s health.”

Music and arts organizations on campus face a unique struggle as they require in-person meetings to be able to practice as a team, and wearing a mask while doing so could prove especially challenging. VIBE, a hip-hop dance group, plans to avoid this through hosting virtual auditions in the fall as well as participating in this year’s virtual Spotlight for potential new members, Treasurer and Promotional Director Alexa Madsen (‘22) said.

“It’s gonna be really difficult this year for dance-oriented performing arts groups because physical distancing affects how we teach,” VIBE President Jianna Miller (‘21) said. “But seeing as the capacity for gatherings is only ten max right now, we’re definitely gonna have to utilize online or other practice methods to accommodate how many people are gonna be on the team.”

Because The Melodores are a smaller group, currently with eight members, they would still be permitted to conduct indoor meetings. They expect to experience similar difficulties to VIBE in terms of accommodating social distancing to their rehearsal, however, specific plans have not yet been established, McCarthy said.

“If anything, we might scale back rehearsals from three times a week to once a week, with a heavier focus on bonding as a group instead of learning mass amounts of music,” McCarthy said.

Instead of a traditional performance, The Melodores plan to take this opportunity to creatively use their time this fall by producing and tracking a new album, McCarthy said.

“Now is a great time to pivot and work on alternate projects we’ve been trying to get done in past semesters without violating social distancing protocol,” McCarthy said. “We’re all super excited to see what we can create.”