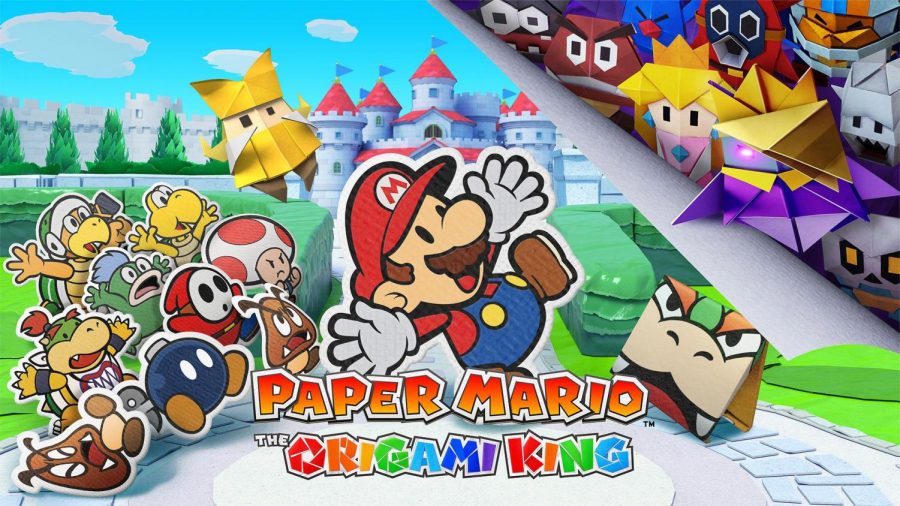 I’m supposed to be angry about “Paper Mario: The Origami King.”

According to a large portion of the “Paper Mario” fanbase, I should be downright furious. But if I’ve learned one thing about the gaming industry, it’s that childish fanboys with access to Twitter will be petty and petulant about pretty much anything Nintendo does—period.

That’s why it comes as no surprise that these narrow-minded nitpickers have a million and one complaints about the latest Nintendo collaboration with Intelligent Systems, a Japanese developer. But their biggest problem? That “The Origami King” isn’t a shot-for-shot remake of the 2004 cult classic RPG “Paper Mario: The Thousand-Year Door.”

Instead, it’s a delightfully original action-adventure game that’s folded new life into a franchise currently crumpling under the weight of two failed installments. Released July 17 on the Nintendo Switch, “Paper Mario: The Origami King” doesn’t have some of the typical RPG elements that brought notoriety to older entries, but it does abandon the weak foundations that caused the 3DS and Wii U entries to fold under pressure. With its fresh take on many aspects of the beloved “Paper Mario” formula, “The Origami King” successfully revives a dying franchise.

In this entry, the paper-thin heroes of the Mushroom Kingdom face off against the folded forces of the deadly Origami King, Olly. Using the power of the five great streamers, Olly has kidnapped Princess Peach, her castle and her Toad attendants while seeking to use the power of origami to bend the world to his will. Olly’s sister Olivia, worried about her brother’s heinous plans, teams up with Mario and others to put a stop to the mad monarch.

It’s a high stakes adventure filled with countless paper-themed puns as Mario’s crew traverses vast paper-crafted landscapes in search of the ends of the five streamers. Along the way, they’ll encounter Folded Soldiers: origami versions of Bowser’s minions that have been brainwashed to serve Olly’s evil purposes. In each enemy encounter, our heroic plumber finds himself transplanted into a circular battle arena surrounded by enemies in a ring formation. With all-new battle mechanics that combine aspects of the puzzle and RPG genres, Mario must rotate or slide the rings to move the enemies’ panels into formations suitable for the most powerful attacks.

While this new take on the RPG battle concept allows for unique fight challenges in which players can develop their puzzle-solving strategies over time, coins are the only reward from most battles. This means that they can get repetitive and a bit tedious once you begin to recognize the patterns. Fortunately, the developers likely predicted and planned around this weakness, as power-ups scattered throughout the world in hard-to-reach places help Mario become strong enough to avoid battles with weaker enemies altogether.

Boss battles are a whole new kind of fun with each area’s big baddie being a member of the villainous League of Stationery. Each boss’s quirky personality—be it Jean-Pierre Colored Pencils the 12th, or simply “Tape”—creates plenty of new opportunities for puns and reinvigorates battle mechanics by introducing new spins on the circular arena with each subsequent encounter.

In a bold game design move, “The Origami King” does away with the formulaic course progression present in the last three “Paper Mario” games in favor of an open world concept. While roadblocks and plot devices guide players along a relatively linear path to victory, this new and expansive world lends itself to a much freer, more open-ended gameplay experience—something that fans have desired for years.

It’s a beautiful paper world out there. Whether you’re barreling down the Eddy River rapids of the gorgeously hued Autumn Mountain, exploring the dangerous ancient ruins buried in the Scorching Sandpaper Desert or diving into the deep blue beneath the surface of the Great Sea, every environment in “The Origami King” has its own special charm and fills the game with a sense of profound adventure. To top it all off, each environmental component is textured to look like paper, cardboard or the like, an impressive visual feat.

In typical Nintendo fashion, a show-stopping soundtrack accompanies these breathtaking visuals. From dramatic orchestral flairs during escape sequences or serene guitar riffs at a peaceful mountain picnic to the Asian-styled themes of the Shogun Studios theme park, these chords perfectly complete every scene. The “Paper Mario” series has always been about doing fun, new things with the Mario brand, and if unexpected dance numbers like Shy Guy ballet and DJ Toad’s underground disco hall don’t scream fun, I don’t know what does.

But the environments and soundtrack aren’t the only ones with carefully crafted individuality. “The Origami King” introduces a colorful new cast of characters that help Mario on his quest, bringing back the beloved concept of adventure companions from classic “Paper Mario” games. Your main partner Olivia is the picture of childlike innocence and a joy to be around, always offering insightful commentary as she discovers the secrets of the paper world right by your side.

Later in your journey, you’ll meet a ditzy and lovable Bob-omb with amnesia, a Toad professor researching ancient civilizations and Kamek, a powerful and sarcastic wizard and Bowser’s right-hand man. Each of these characters has a charming personality, with well-written dialogue full of self-aware jabs at the Mario franchise. You’ll even team up with Bowser himself during certain story segments, and while the Koopa King may not ever succeed at defeating Mario, he certainly wins at one-liners.

Even the generic Toads have some great lines—especially in their new form as collectible items. Olly has folded them into origami and hidden them throughout the kingdom, some in the shape of cave-dwelling insects, others as river fish, others merely crumpled and shoved under crates. Mario must find and free them from all sorts of interesting forms, each of which comes with a line of unique, often punny, dialogue. Motivating players to search for optional collectibles is one of the toughest tasks to accomplish in a game, and “The Origami King” injects just enough humor into the Toad hunt to make it an honestly enjoyable distraction. Plus, every Toad you rescue will come to the bleachers surrounding the battle arena and cheer you on during battles. There’s no shortage of reasons to want to find each and every fungi friend.

No matter how you fold it, “Paper Mario: The Origami King” is a fantastic entry in a series that’s certainly suffered in recent years. From distinctive new battle mechanics and gorgeously decorated landscapes to new characters that are so much more than flat paper, it’s a game that sets out to accomplish quite a lot—and succeeds at almost every step of its emotionally moving story about power, sacrifice and humanity.

I’m just glad I can play it without getting a paper cut.