The Hustler sat down with this year’s ten Ingram Scholars to hear what they’ve been up to during quarantine and their hopes for the future. 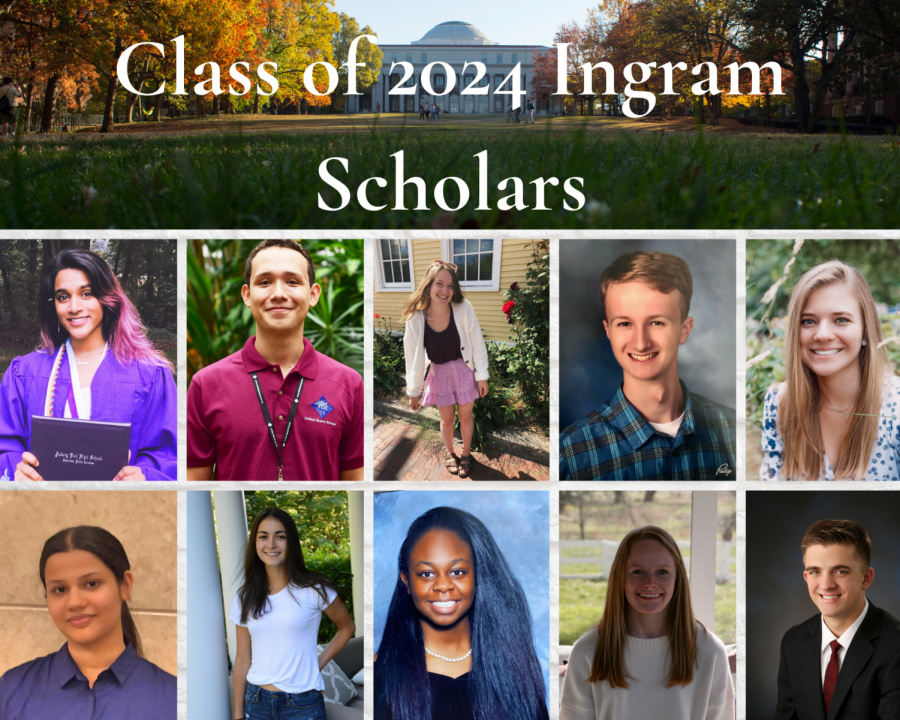 The Ingram Scholarship is awarded each year to seven to ten incoming Vanderbilt first-years who exemplify the values of character, service, leadership and giving. (Hustler Staff/Emma Mattson)

On June 15, Vanderbilt announced the ten members of the Class of 2024 who had been selected as this year’s Ingram Scholars from a pool of almost 1,000 applicants.

The Ingram Scholarship, now over 25 years old, is awarded annually to seven to ten incoming first-years who exemplify character, service, leadership and giving. Each applicant writes three essays in addition to their application essays. Those selected as finalists attend an on-campus interview weekend typically held in February.

The recipients receive a full tuition scholarship, as well as a $5,000 stipend to conduct a service project the summer after their sophomore year. In return, the students commit to maintaining a 3.0 GPA and completing 20 hours of service work each month.

The full list of Class of 2024 Ingram Scholars includes:

Each Ingram Scholar brings a different blend of service experience and motivation to the Vanderbilt community.

For Gabby Jones, the motivation to serve came from inequities she saw around her, she said. Jones loved the education she received at Gwinnett School of Mathematics, Science, and Technology, but she thought the school was selfish with its resources, Jones said.

”We always had ours in sight. We tutored ourselves, and I was like, we don’t need that much help,” Jones said. “There’s literally a school getting half our funding and half our sponsorship right there.”

To address the educational inequity she saw in her own community, Jones started Teens Tutor Teens, a registered non-profit that provides free tutoring for kids around the country. As a sophomore in high school, Jones taught herself how to file taxes and accrue Google Ads revenue. Though the nonprofit still runs on a shoestring budget, she hopes to expand to the Nashville area when she joins Vanderbilt in the fall, she said.

For Lillian Hubbard, the impulse to serve began within her own home when her younger sister Ella was diagnosed with Type 1 diabetes.

“I witnessed firsthand the detrimental effects of chronic illness as I watched my sister and my family struggle daily to manage her diabetes,” Hubbard said in an email to The Hustler. “The desire to help my sister and others similar to her inspired me to create ‘Ella’s Ellaphants,’ a Walk Team to raise money for the Juvenile Diabetes Research Foundation.”

Soenika Gorrepati drew on her work with the Charlotte-based Project 658 to create Prepare, a 501(c)3 organization that sustainably provides STEM education to rural public schools in India.

In the for-profit sector, Will Hemmond started a project with his high school friends at a MAHacks event in December 2019 and developed a new use for blockchain in pharmaceutical trials.

“A lot of people run nonprofit companies or volunteer organizations, and this is explicitly a for-profit company,” Hemmond said. “The way that I feel that it gives back to the community is that it provides transparency and trust to patients.”

After seeing so many of her high school friends’ self-esteem plummet because of experiences on social media, Julia Tilton set out to reevaluate her own interactions with Instagram and Snapchat. For her Gold Award project—the culminating achievement of a Girl Scout’s training—she designed and implemented a curriculum to encourage healthy use of social media in teenage girls, she said

“People tend to look at service like, ‘Oh, it’s something I have to do, just another thing to check off,’” Tilton said.  “But if you look at it as an opportunity to make a positive change about something you really care about, then your experience will be so much more valuable.”

Max Adams, founder of Saturdays Are For the Bees, a project which raises awareness and funds for bee preservation, said he addresses problems one small step at a time.

“I don’t want my course to be set by a fear of failure, because a fear of trying is really the worst possible scenario,” Adams said in an email to The Hustler.

The Ingram Scholarship comes with a $5000 stipend to support a service project in the summer after their sophomore year, and this year’s scholars are already dreaming about what they’ll do.

“For my service project, I would like to start FIRST LEGO League or FIRST Tech Challenge teams in rural South India,” Gorrepati said in an email to The Hustler. “By creating enough teams for students to compete at regional and national levels, I will be working towards my bigger goal of transforming the educational climate of these schools from one that favors rote memorization to one that respects curiosity-driven, application-based learning,” she added.

Gorrepati is not the only scholar who’d like to spend the summer abroad.

“If all time and money constraints were removed, I would travel to underdeveloped parts of South America, and establish free health clinics with teams of doctors and nurses to provide proper healthcare to underserved individuals,” Charlotte Meyers said in an email to The Hustler. “I hope to utilize my Spanish speaking skills while making an impact on these communities.”

Jose Leonardo Brenes, an Ingram Scholar from San Jose, Costa Rica, said he also wants to use his bilingualism as a tool for positive change.

“One of the ways I see myself serving is taking advantage of being bilingual to help those that have language as a barrier,” Leonardo Brenes said in an email to The Hustler. “I would also want to use my experience in engineering projects and programming to inspire others to pursue STEM careers.”

On the domestic side, Nicole Hankovszky, who created a drone security system specifically for schools, said she would love to make her system a reality in as many schools as possible. Adams will focus his service on developing a sustainable apiary on Vanderbilt’s campus while connecting it to Nashville’s larger beekeeping community, he said.

In February 2020, the Ingram Scholars Finalist Weekend provided the scholars a unique chance to explore Vanderbilt and Nashville with other peers in their cohort.

“The opportunity to learn about the amazing things my peers and the scholars have done was eye-opening,” Meyers said. “Learning more about the program and Vanderbilt made me even more eager to be a part of the Ingram Scholars family and the Vanderbilt community.”

Besides a schedule of planned activities, the Finalist Weekend included an in-person interview with each scholarship candidate—the final stage of the Ingram Scholars application.

“The interview was definitely the most challenging moment,” Leonardo Brenes said. “Even though I had prepared thoroughly, I was nervous since it was the culminating moment of the application process.”

Overall, however, the occasion brought the finalists even closer together, Adams said.

“As nerve-wracking as it was to join the other finalists at the welcome session, my fear was quickly replaced with excitement as I began to learn more about the other applicants and the amazing community of existing Ingram Scholars,” Adams said. “Everyone was so genuine and welcoming that I found myself feeling like I was amongst friends versus part of a selection process.”

A day after the announcement of the Class of 2024 Ingram Scholars, the university unveiled its Return to Campus plan.

“I opened that [Return to Campus] email and felt some relief that at least we get to be on campus,” Tilton said. “For me as a first-year, I’m just so excited for college in general, and being on campus is going to be something that no one is taking for granted this year.”

The city offers unique arenas for service, as well. Puri, for instance, said she looks forward to partnering with organizations in the Nashville area, including the Nashville Entrepreneur Center and the Nashville Financial Empowerment Center.

“Committing to Vanderbilt was something I did not have to think twice about,” Meyers said. “From the moment I first visited campus, I could feel the overwhelming sense of community and Vanderbilt pride beaming off of the students and faculty. I knew for certain that Vanderbilt was the perfect mixture of academics, culture and community for me.”