BMO saddles up for a hero’s quest in “Adventure Time: Distant Lands”

Return to the “Land of Ooo” and beyond with the first charming and imaginative episode of the HBO Max exclusive series “Adventure Time: Distant Lands”—featuring BMO, of course. 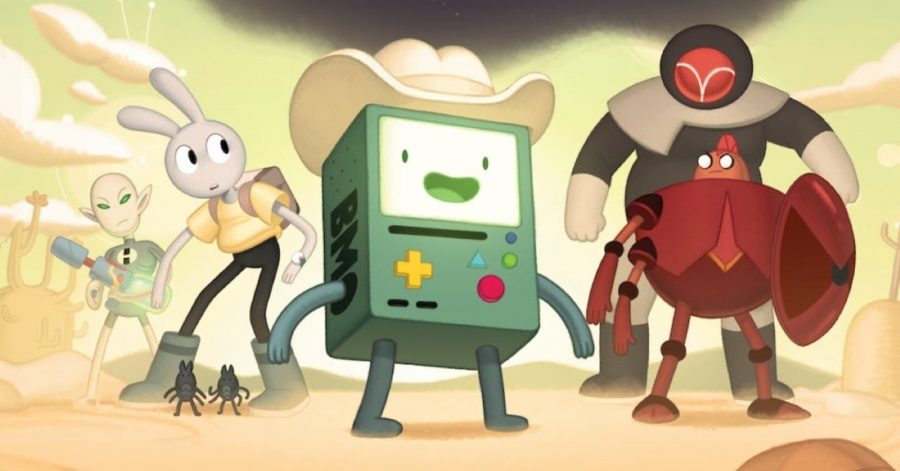 When “Adventure Time” took us into the Land of Ooo for the very last time in Sept. 2018, it was from the unexpected vantage point of the inexorably friendly robot BMO. In this whopper of a series finale, BMO—under the new, yet familiar mantle “King of Ooo”—relayed the story of the Great Gum War to the young adventurers Shermy and Beth, roughly 1,000 years after the era of Finn and Jake’s dogged heroism. “Come Along With Me” was the perfect finale to a show that continuously managed to deliver real and powerful messages in brightly colored candy wrappers (literally—the Candy Kingdom was all pinks and purples).

The revamped intro sequence and theme song for the series finale, featuring Shermy and Beth, promised to take viewers on adventures to “far-off, future lands” which aptly mirrored Finn and Jake’s travels during the brothers’ time in the spotlight. These “future lands” were exactly what many fans expected when Cartoon Network and HBO Max announced “Adventure Time: Distant Lands,” an epilogue series of four hour-long specials that would bring back all our favorite characters from the genre-defining animated series.

Finally, June 25 marked our time to come along with BMO on the first of these new adventures, titled after the childlike robot/computer game/friend to all, voiced by Niki Yang.

The episode opens with BMO’s solemn narration of his solo space mission to Mars, complete with the quirky yet profound observations on the vast emptiness of space that we might expect from the titular character. Mere minutes later, however, the spacecraft is thrown off course by a small shape-shifting droid nicknamed Olive. The robotic duo crash lands on The Drift, a self-contained space station city that’s relatively standard fare in fantasy sci-fi (think Tatooine of “Star Wars” fame or the MCU’s Knowhere). They meet humanoid rabbit scientist Y4, voiced by Glory Curda, who has a keen interest in studying BMO’s robotics, and the trio of unlikely companions are thrown headfirst into a galactic conflict among The Drift’s residents.

As self-proclaimed Sheriff BMO adventures with its newfound friends, a somewhat predictable space cowboy story unfolds in the series’ ever-unpredictable universe—a dichotomy that produces a charming narrative despite its formulaic structure. Y4, a typical angsty teenager with self-esteem issues, faces a physically and emotionally harrowing journey that teaches her to trust her intuition and boosts her confidence. She and BMO have immediate and undeniable chemistry, especially as BMO’s adventurous instinct starts to influence Y4’s decisions—the heroic ‘bot often has that effect on people.

But as longtime fans might expect, things aren’t always as straightforward as they seem. Even during BMO’s intro voiceover in space, things get way weird, way fast—we watch the Space Moth consume a comet and strange beings harvest heavy metal from a meteorite, among other things. The residents of The Drift are just as wacky, with many who seem to be from the same space-faring species as the delightfully ditzy Cuber from the original series’ Graybles episodes.

Every scene aboard The Drift is beautifully and immersively crafted in “Adventure Time’s” signature soft, bouncy and expressive color palette with pleasingly smooth linework, so that the hopeful ambiance always shines through no matter how dark the outcome may seem. The mythology of the world expands at every narrative turn, but it follows its own dependable internal logic and never stretches too far—even in its presentation of various callbacks to the main series, such as BMO’s introspective dialogues with his mirror world alter ego Football, or the mysterious Mr. M’s striking resemblance to Finn’s father Martin Mertens.

What all this means is that “BMO”—regardless of its fresh take on the series—feels just like good old “Adventure Time,” an achievement that epilogue series like “Steven Universe: Future” have struggled with in the past. By the end of the 45-minute special, its predictable-yet-enjoyable narrative tropes, outlandish and surreal worldbuilding and lovably unique one-off characters all come together in typical “Adventure Time” fashion to produce something that boldly stands out in the world of animation.

Ultimately, what “BMO” does best lies in its character development for the titular ’bot. Many fans of the main series wondered where BMO got its “hero” heart, often attributing that character trait to its friendship with the fiercely heroic Finn and Jake. However, the surprise twist ending puts everything in a new perspective when we discover BMO’s space adventures actually take place before he meets the adventuring brothers, who appear as younger versions of themselves at the very end of the episode.

This tells us that BMO’s enthusiasm for life, optimism in the face of danger and innocently profound wisdom are all just part of the cheeky robot’s life philosophy. At one of the episode’s most critical moments, he delivers a signature BMO one-liner reminiscent of his main series truth bombs: “Even when things are really stupid, we still have to try.” This felt like a tangible confirmation of what I’ve suspected since the original series’ “Be More” episode (my favorite)—MO Co. founder Moe succeeded in his mission to program a life form that could truly be something more.

“BMO” is all the proof we needed that our intrepid hero is indeed more than we ever imagined.