GUEST EDITORIAL: No justice, no peace

Why only supporting protests against racial injustice if they’re peaceful misses the point. 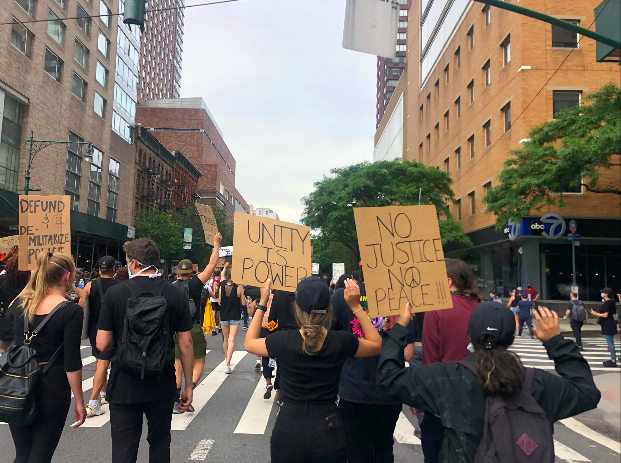 Editor’s Note: Anna Yarinsky is a former staff writer for The Vanderbilt Hustler.

“I support you, but I don’t support your methods.” “You won’t accomplish anything by getting mad.” “Protest peacefully—violence is never the answer.”

If you support protests in theory but condemn violent protests, you’re missing the point.

After George Floyd was murdered by a police officer on May 25, 2020, people in cities across America took to the streets to protest police brutality and racial injustice. The passion and anger in the air at these protests show just how tired Americans are of racial inequity, of living in a country in which police officers kill Black people and almost never face consequences and of pleas for justice going unheard for far too long.

Though the protesters have met with support from allies across the country and the globe, they’ve also come under fire for the way in which they’re protesting: they’ve been accused of being too violent, too angry and too destructive. Yet to insist on peacefulness before justice has been served works against protesters who are fighting to have their voices heard and their demands met.
Peace is not the first priority of the hundreds of thousands of protesters chanting “no justice, no peace” as they march through the streets, nor should it be.
Instances of violence and looting represent a tiny fraction of the total protesters and have been blown out of proportion by the media. Attending protests in New York City, I witnessed giant groups of peaceful protesters led by organizers who actively discouraged looting and violence. I agree with the many who speculate that the majority of violent offenders and looters are people unaffiliated with the movement who have come to seize an opportunity to steal from stores or, worse, to undermine the legitimacy of the protests.

Furthermore, many of the violent incidents have actually been perpetrated by police officers assigned to protect the protest routes. Videos are surfacing of police officers using dangerous rubber bullets, tear gas, batons and pepper spray on unarmed protesters: one particularly upsetting video shows Buffalo police officers pushing an elderly man who was later hospitalized. One cannot speak out against protesters’ violence and looting without speaking out as harshly against the violence that many officers have inflicted upon protesters.

But, more importantly, criticisms of violent protests invalidate the reasons why protests are happening in the first place. People protest because they aren’t being heard. For that reason, it’s important to spotlight Black people’s voices so that we can all hear them, learn from them and try to change a justice system that was never made to protect them. We can’t just try to sweep all of the anger that we’re witnessing under the rug. If you’re more outraged by the looting and violence you’ve seen on TV than by the acts of police brutality that led to those behaviors, you’re showing that you’d rather maintain your sense of normalcy than reform this broken system.

Dr. Martin Luther King is often praised for leading non-violent protests during the Civil Rights movement of the 1960s. Yet he recognized why violent protests—often referred to as “riots”—happen as well.

Right now, over fifty years later, America clearly has yet to hear.

I’m not pro-violence. Dr. King also said, “riots are socially destructive and self-defeating.” It’s true that violent protests have consequences: people get hurt, people go to jail and property is destroyed. Yet, when you put yourself in the shoes of someone who is risking everything to engage in violent protest, you have to think: how far must this person have been pushed to do this? And what does it say about our society that racial injustices are such a problem that they are pushing people this far?

As protesters chant “I can’t breathe” and “Hands up, don’t shoot,” their words reinforce that these protests are about matters of life and death. To say that you only support the movement as long as it remains “peaceful” minimizes the fact that Black people’s very humanity is at stake. Efforts to negotiate peacefully have rarely saved Black people’s lives, and George Floyd’s murder is a tragic example of this.

For this reason, advocating for justice system reform and condemning violence at the same time is counterproductive. News time slots are limited and focusing on the fraction of violent protesters pulls focus from the core issue of police brutality. The power of social media means that the content that matters the most often gets lost in the algorithms that determine our feeds, and distracting from the core message of the protests only hastens this process.

President Donald Trump called the protests “acts of domestic terror” in an address to the nation on June 1. We don’t have to think too hard to understand why Trump’s description of those who protest police brutality looks so different from his 2017 remarks in which he said that “there were very fine people on both sides” when referring to the Charlottesville clash between white supremacists and the people who protested them.

Trump couldn’t be more wrong. The real acts of domestic terror are the instances of police brutality which are the very reason why people are protesting. As trauma therapist Yolanda Enteria wrote on Instagram, “Riots are not the problem. Riots are a symptom of the problem.” The only solution that will end these protests is to produce real change in the justice system that convinces Black people that they do not have to fear being killed by a police officer; that they can depend on the systems that claim to serve and protect them to treat them equitably.

This sort of systemic change will take time, effort and funding. Sadly, the President said that his solution was to respond with “overwhelming law enforcement presence until the violence has been quelled.”

It’s clear that putting more police in contact with protesters would do much more harm than good, yet Trump seems more concerned with appealing to his base of supporters than actually trying to improve the situation.

The protests have gone on for almost a week and show no signs of stopping. In New York City, as in many cities, they seem to be growing larger by the day. Instead of criticizing and minimizing them, we need to start asking: how can we lift up the voices of marginalized communities, particularly the Black community, so that they may be heard? How can we fix the broken system that they’re protesting?

I recognize that, as a white woman, there’s an inherent disconnect in my writing an essay—a format that privileges my own voice—about why we need to uplift marginalized voices. I want to encourage everyone to engage with the content that Black people are posting on social media–I followed #amplifymelanatedvoices on Instagram so I can see more of those posts–and to read some of the amazing works that people of color have written about racism and injustice. I’ve seen a lot of reading lists going around; here’s one compiled by the antiracist scholar Ibram X. Kendi. (From his list, I recommend Toni Morrison’s The Bluest Eye and am adding Audre Lorde’s Sister Outsider to my reading list). For shorter readings, there are many powerful essays reacting to George Floyd’s murder and the ensuing protests that you can find online. One that I recommend is Roxane Gay’s recent opinion editorial in the New York Times in which she writes, “The rest of the world yearns to get back to normal. For black people, normal is the very thing from which we yearn to be free.”

I’ll end with the words of former President Barack Obama, who penned a letter about the protests on June 1: “The point of protest is to raise public awareness, to put a spotlight on injustice, and to make the powers that be uncomfortable; in fact, throughout American history, it’s often only been in response to protests and civil disobedience that the political system has even paid attention to marginalized communities.”

Let’s get uncomfortable, let’s pay attention and let’s channel the energy of these protests into dismantling racial injustice at all levels of our society.