Petitions calling for Professor Emerita Virginia Abernethy’s title to be removed, Vanderbilt to be more accountable for racial justice were created by current and former Vanderbilt students in the past week. 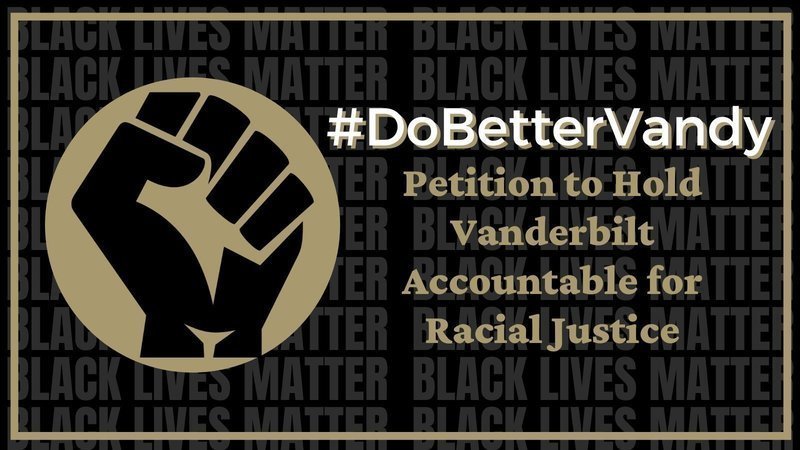 Both current and former Vanderbilt students have created and circulated two petitions: one to strip Professor Emerita Virginia Abernethy of her title at the university and one holding Vanderbilt accountable for racial injustice.
The petition to strip “ethnic separatist” Virginia Abernethy of her title at Vanderbilt University
Rising junior Silas Munk said that he saw a student create an Instagram post about Professor Emerita Virginia Abernethy. Abernethy, a professor emeritus of psychiatry and anthropology at Vanderbilt, has been labeled a white nationalist by the Southern Poverty Law Center. Munk created the petition on May 31, hoping that it would get the university’s attention.

“Vanderbilt, an academic institution, really has to hold themselves to a high standard. They have these values that they fight for and they can’t really fight for them if they’re supporting somebody that does the exact opposite of what they’re doing,” Munk said. “I don’t think so much that it’s a huge change, but I think it’s necessary and notably productive.”

At the time this article was published, the petition had over 800 signatures with a set goal of reaching 1,000 signatures. Munk added that the next goal includes getting in touch with Vanderbilt administrators and continuing to pressure the administration to do the right thing.

When asked for a comment on the petition to strip Professor Emerita Virginia Abernethy of her title, the university responded with the following statement over email:

“Vanderbilt is committed to a safe and welcoming campus community, where diversity, equity and inclusion are core values. Virginia Abernethy has not taught at Vanderbilt since 1999, when she became a member of the university’s emeriti faculty. Her views do not represent those of the university.  Vanderbilt respects faculty speech rights, even when faculty say things with which we vehemently disagree, as is the case with Professor Emerita Abernethy.”

The Hustler was unable to contact Abernethy for comment.
The petition to hold Vanderbilt accountable for racial justice
On May 31, the official Vanderbilt University Instagram page posted about its statement on racial injustice in our society. Vanderbilt alumna Danielle Sutton (BA 2019) and her friends saw the post, which Sutton described as the catalyst for the petition to hold Vanderbilt accountable for racial injustice. She said that she and her friends felt the statement was lacking and were expecting the university to outline what their actions would be to support communities of color on campus.

From there, Sutton describes the formulation of the petition as a collaborative effort. Through outreach on various forms of social media, Sutton and others created a Google Document where people could add their thoughts and also took insights from people’s social media posts and Instagram stories. From there, the over thirty contributors decided which ones they felt resonated the most with everyone involved.

“Collaboration was essential because I recognized that my experience as a Black person on campus was unique. I cannot claim to represent everyone’s perspective,” Sutton said. “It’s so important to validate all voices and I really wanted to make sure this petition reflected that. That’s why it was in a Google Doc, that’s why over thirty people had access to it.”

A full letter, also written by the over thirty contributors, was sent to Vanderbilt administration on June 3, and Sutton received a response from Interim Chancellor Susan R. Wente on June 5. Wente said in the email that she shared Sutton’s commitment to ensuring that Vanderbilt was an equitable, diverse and inclusive community. Wente also proposed a Zoom call to continue discussions with herself, Vice Chancellor André Churchwell and Vice Provost William Robinson. She invited not only Sutton, but also 3-4 other individuals of Sutton’s choice.

“Together, our community and the world face myriad challenges, but our commitment to a safe and welcoming campus has not wavered and is, in fact, stronger than ever,” Wente said in the email.