In the wake of George Floyd’s death, it’s evident that not all protestors are afforded the same public support. 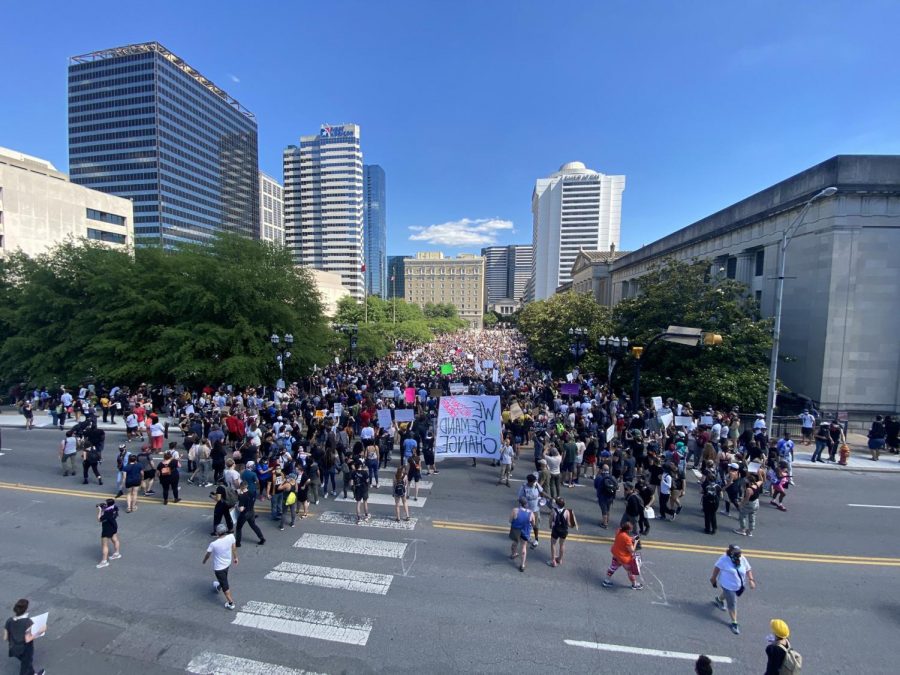 The United States is in a justifiable uproar following the May 25 murder of George Floyd when former Minneapolis police offer Derek Chauvin forcibly knelt on his neck for over eight minutes. In response, protestors took to the streets in Minneapolis, destroying and looting many businesses, most notably a Target. This generated a strong backlash, with many questioning how such destruction could aid any sort of progress.

Given the negative response toward the protestors that are now rioting nationwide, it is useful to understand that civil disobedience can manifest in either non-violent or violent forms. The American consciousness heralds peaceful protests, such as those of civil rights leader Martin Luther King Jr. (MLK), as valiant efforts that should be the standard against which all other social movements are judged.

However, it’s important to note that the Civil Rights Movement, which is widely held as a transformative and beneficial social movement, did, in fact, employ violent protests in addition to sit-ins and marches. Rioting and looting took place in major cities during the long, hot summer of 1967, as well as the following year after MLK’s assassination. This shows that a profound level of change can indeed spring from a blend of non-violent and violent protests. Both forms are conducive toward enacting change, especially when used in conjunction, as they each ensure that society is held accountable.

There is a long history of this type of protest, not just regarding issues of racial discrimination. One could claim that this country was founded upon incidences of violent protests, with historical examples such as the Boston Tea Party where property was destroyed and destructive riots following the passing of the Stamp Act in 1765. These actions would come to be worshipped as American mythology and expressions of free speech that were warranted responses to injustice.
If these acts were committed by patriots as opposed to criminals, what is different now?
This shows that the issue is not about whether protests should be violent or not. The actual problem is that everything Black America does is not only viewed differently but as more threatening, dangerous and violent compared to white America. These protestors cannot engage in violent protest because their mere existence is already deemed violent.

Bias completely alters the way in which different groups are able to protest. This was never more apparent when President Donald Trump referred to Minneapolis’ Black protestors as “THUGS” in a tweet from May 29. This is radically juxtaposed by his Twitter defense of white protestors, many of whom were armed when calling for the reopening of stores and businesses after the COVID-19 shutdown in Michigan, as he deemed them “very good people” on May 1. Fortunately, the president’s May 29 tweet has been given a warning label, as Twitter rightfully viewed his statement, “when the looting starts, the shooting starts,” as an incitement of violence.

While rioting and looting is already a contentious issue, these protests are even more controversial because of the race of the protestors. While this is not all too surprising, it’s an important reality to face. This is the precise issue that caused the death of George Floyd and so many countless others.

Aside from the unfair manner in which race impacts the public support a protest receives, on a human note, it’s paramount we understand these protestors’ frustration and allow them to express their anger. In this instance of murder by brute force, especially following the deaths of Breonna Taylor and Ahmaud Arbery within the past four months, a breaking point has been reached.

Even more bleak is that the fact no matter how much progress the U.S. makes towards an equitable society, there exists no “quick fix” to the racial discrimination that persists year after year. There is no way to purge a country of the covert manner in which racism forms the lives of so many Americans. Today’s world is rife with microaggressions and deeply buried prejudice that continually remind people of color of their unequal status and suppress their progress. Given this bleak truth, imagine the frustration these protestors are experiencing after yet another malicious act against a Black American.

We have to allow these protestors the opportunity to relieve their anger and fear after a traumatic experience. Granted, there has been collateral damage such as destroyed property to innocent business owners, but this can be rebuilt. In fact, cities like Chicago have voiced their commitment to aid in storefront reconstruction and there is a litany of movements gathering donations for this cause as well. On the other hand, damage to human life like the murder of George Floyd is irrevocable.

Yes, there has been needless injury. Yet, there has also been blatant violence for centuries against Black Americans, and we must grant them this opportunity to heal through public outcry. If we cannot fully understand their experience, who are we to comment on the manner in which they express their outrage?

The looting of businesses is simply a method of grabbing Americans’ attention to reveal this inequality that is persisting largely unfettered. While this might horrify many onlookers, that’s exactly the point. Imagine how genuinely terrifying it is on the side for the people who live in fear every day while others coast by, unbothered.

Thus, violent civil disobedience is an entirely justifiable response to this ongoing duality of the way Americans of different races are viewed and treated on a daily basis. Given the continued violence these protestors are receiving against the police, their point is being all but confirmed. With all of this being said, it is important for protests to be purposeful and intentional. This movement has done well in this regard with its prolific social media presence, targeting the turf of young people who have the greatest ability to call for change.

Many Americans might find these protests disruptive or uncomfortable, but that’s exactly the point. Nothing about confronting racism is pleasant, but it’s a reality many Americans need to be presented with. As sociologist Emile Durkheim would claim, crime exposes us to the flaws in our society. Thus, in order to not let George Floyd and countless others be murdered in vain, we need to listen to the cries of these protestors in order to evaluate our complicity in this repulsively unequal America we inhabit.