The Vanderbilt Hustler • May 29, 2020 • https://vanderbilthustler.com/32445/featured/class-of-2020-reacts-to-the-universitys-announced-dates-for-their-commencement-celebrations/

The rescheduled in-person commencement will take place May 1-2, 2021—earlier than previously suggested by the university. 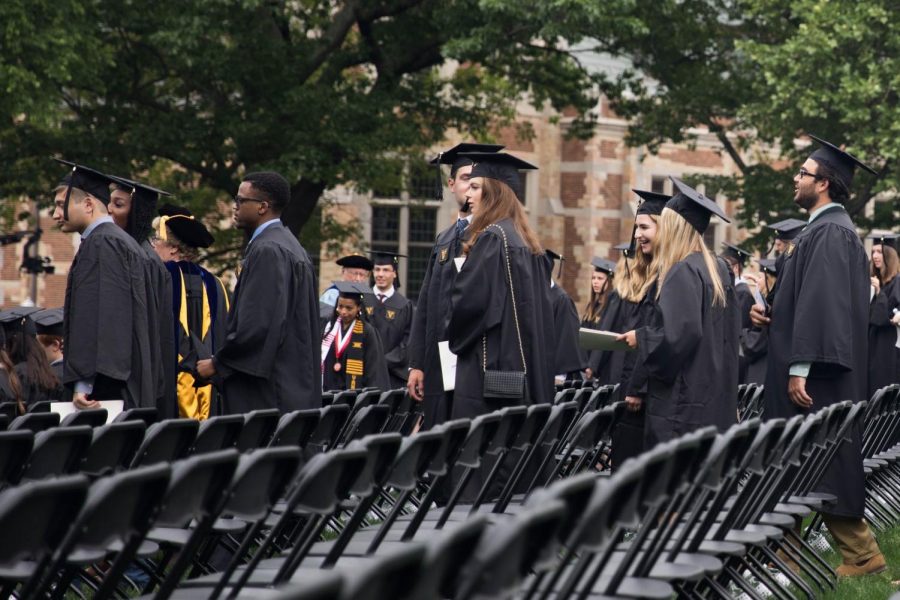 On May 22, Vanderbilt announced the Class of 2020 commencement celebrations next year will be held May 1 and 2, updating previous communication, which had stated the university planned to hold the events between May 12 and 16.

Interim Chancellor Susan Wente appointed 12 undergraduate and ten graduate students to a Commencement 2020 Graduating Student Committee, which was officially announced on April 13. At their first meeting in late April, the committee voted to recommend May 1-2 for the rescheduled commencement celebrations, according to committee member Constance Du.

Du said the committee recommended May 1-2 because the dates were favorable with university groups, avoided conflicts with other universities’ commencements and would celebrate the Class of 2020 before the next class graduated.

Jack Ding, committee representative for the School of Engineering, said that the committee did not have the power to make any final decisions. Their job was simply to make an informed recommendation on behalf of the student body, which was then passed up the chain of command to the deans of each school, Interim Chancellor Wente and the Vanderbilt Board of Trustees.

Du, however, said she learned of the vote’s results secondhand. She was unable to attend the committee’s first meeting because of class, and she wasn’t the only one. According to Du, 6 of the committee’s 22 members were absent when they voted on dates for the rescheduled ceremony.

How the Vote Happened

Du, a Founder’s Medalist and first-generation American, said she is starting law school in the fall. She, like other students beginning graduate and professional school, might not be able to come back for the celebration since the dates fall before the end of her spring semester.

“With law school, your first-year grades determine a lot for you in the way that summer associateships and other things will work out,” Du said. “So I don’t know how comfortable I would be leaving to come back to campus in the middle of finals—as much as I want to.”

After the university’s official decision was announced, Du said she received texts from some of her friends, asking how the committee had made their recommendation and whether they had taken student survey data into account.

According to the university’s May 22 announcement, the advisory committee had sent out a survey in April to all graduates asking for feedback about the rescheduled ceremonies. The survey received more than a thousand responses, garnering a 49.6 percent undergraduate and 34.5 percent graduate and professional student response rate.

Per Ding, the committee did not have access to the full survey results when it made its recommendation. In their first two meetings, the committee received an Excel spreadsheet with only 29 responses, Du said.

With a fixed date in place, the committee will start planning next year’s celebrations, but Du said she decided to step down from the committee after she found out that she would not be able to attend the graduation ceremony.

“There’s that sense of finality I’m coming to terms with, now that I know I won’t be returning,” she said in a message to The Hustler. “Time keeps moving on, and I have to [move] with it, as much as I want to be at Vandy forever.”

How Class of 2020 Students Feel

Troy Jiang, a member of the undergraduate Class of 2020, said that the finalized dates offer a measure of hope.

According to Ding, at least a few of the undergraduate committee members were very vocal about celebrating before the Class of 2021, and some non-committee students agree.

“I’m happy we get to walk before the Class of 2021 since we did end a year before them!” Class of 2020 senior Sophia DeMarchi said in a message to The Hustler. “I really hope that a large percentage of students choose to attend since that is what will help make it worth it.”

Others, like Ding and Du, say that graduating before or after the next class makes no difference to them.

“For me, what I was really looking for was just distance enough from the other class’s graduation that we got to experience our own thing, resource-wise and space-wise,” Weaver said.

Weaver believes that the 2021 Memorial Day weekend would have been a better option, because most graduate schools finish their semester by the end of May. The three-day weekend would also have made travel easier for people with jobs, Weaver said.

“Especially given how much [the university] encourages pre-law and pre-med students to follow those paths, and they tout those types of accomplishments and those resources for students, it seems a little contradictory to shove them under the bus when it comes to graduation,” Weaver said.

In the end, Ding says he’s just glad the university is having an in-person celebration at all.

“The pandemic is a holistic hit to everything, including the budget, and the school is still committed to having a special commencement like before,” Ding said. “This is a very huge commitment, and it’s a huge encouragement to us. They’re not saving this money for other things; they’re still spending this money [for] the Class of 2020.”

The university took student opinions and suggestions very seriously, Ding said, and he is personally satisfied by the whole process.

“Did they do everything they can within their power?” Ding said. “Yes, I think they did.”