The Vanderbilt Hustler • May 10, 2020 • https://vanderbilthustler.com/31776/featured/rising-junior-shaves-head-after-raising-2k-for-local-food-bank/

Alex Cuc reached her GoFundMe page fundraising goal for the Greater Chicago Food Depository in under a week. 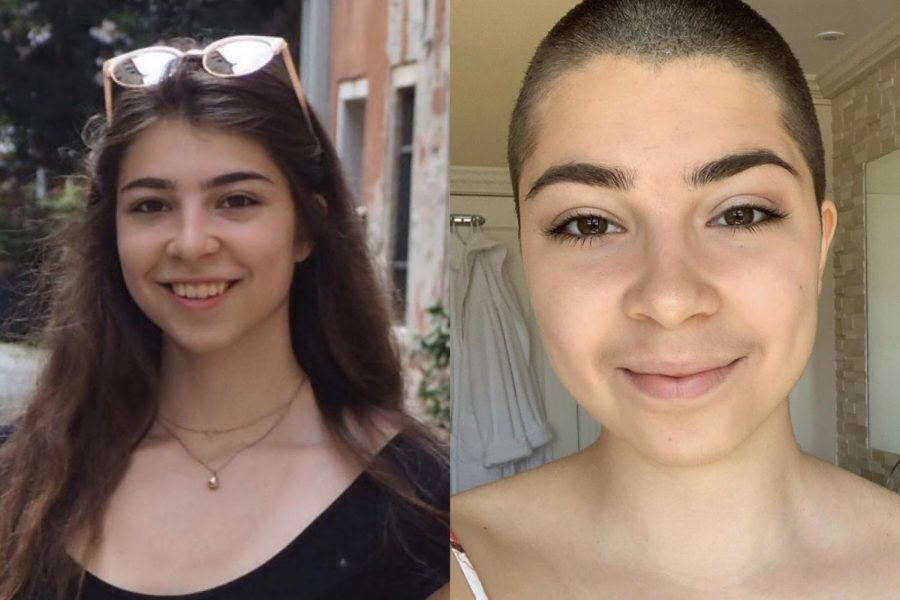 Before and after Cuc shaved her head following raising $2,000 for a local food bank. (Photos courtesy Alex Cuc)

When contemplating ways to step outside of her comfort zone, rising junior Alex Cuc typically thinks of travelling. Now, Cuc has a buzz cut.

Cuc recently shaved her head after starting a GoFundMe fundraiser to raise money for the Greater Chicago Food Depository. After starting the fundraiser April 25, it took less than a week to hit her $2,000 goal.

Cuc had pledged to shave her head after hitting this benchmark and donate her hair to the charity Locks for Love. Locks for Love makes wigs for children that have lost their hair due to cancer treatments.

“I had wanted to cut my hair for a while, or shave my head, and my friends were like, please, just wait it out. Don’t do anything crazy right now,” she said.

Recently, her friends brought up the idea again in a conversation after entering quarantine. Cuc decided that now was the time to go for the new look, along with a fundraiser. The next day, she and a friend started the GoFundMe page.

“I thought it would be interesting to go outside of my comfort zone and seek our new experiences, especially with COVID going on right now. I really value adventure and getting out of my comfort zone,” she said. “But there was really no way for me to do that.”

Cuc also said she wanted to see how her confidence would be affected by shaving her head and to see if people treated her differently without her long hair.

“I really thought I would be more self-conscious of it than I am. A lot of the times if I’m walking outside, I kind of forget that I have a shaved head,” she said.

Cuc also said that strangers treat her in the same manner as before, whereas people she knows have been very supportive and proud of her charitable action.

Awareness for the fundraiser spread through a Facebook post and through word of mouth from friends and family. The positive response was shocking, she said.

“I was incredibly surprised by the support I was getting,” she said. “They were people I hadn’t talked to in so long, that just saw it on Facebook and decided to contribute or just share the link.”

Buzz cuts and unusual hairstyles have become somewhat of a trend during quarantine. Cuc, however, said she only realized that she was taking part in a larger trend once she brought it up with her parents. After her dad was initially skeptical about the plan, she did some online digging “for evidence that she should do it” and found that her haircut aspirations were more normal than she initially realized.

While Cuc currently doesn’t have plans for another fundraiser, shaving her head again isn’t out of the question.

“I’m going to let it grow out, but I might shave it again maybe in like a few years from now,” she said.