Vanderbilt running back Ke'Shawn Vaughn has a skill set tailor-made for the NFL. 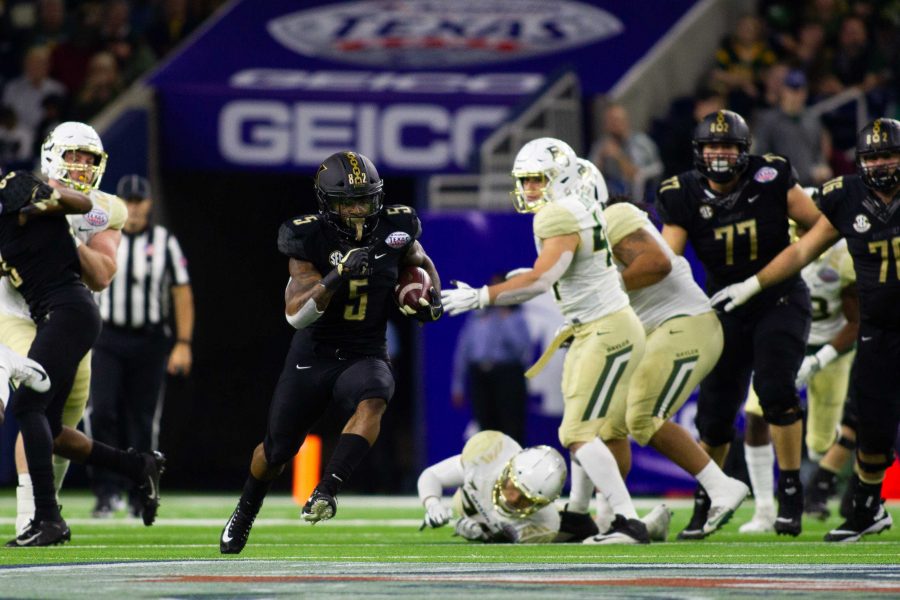 Ke'Shawn Vaughn scrambles for a touchdown in Vanderbilt's 45-38 loss to Baylor in the Texas Bowl. (Photo by Hunter Long.)

After sitting out the 2017 season due to NCAA transfer rules, Ke’Shawn Vaughn was far from a slam dunk pick to lead the 2018 Commodore backfield. The Nashville native joined a strong stable of running backs in senior Khari Blasingame, now a fullback for the Tennessee Titans, and Jamauri Wakefield. Each of the three was unique in their own regard; a running back by committee seemed very plausible. On Aug. 28, 2018, prior to his Week One matchup, Derek Mason took the podium and merely reiterated that notion.

“I think they’re all dudes. I feel comfortable with any of those guys lining up at tailback,” Mason said, adding later, “I feel like Ke’Shawn Vaughn is the beast we thought he was.”

Surely, what unfolded over the course of the 2018 season far exceeded Mason’s expectations. Vaughn wasn’t just the “beast” they thought he was. With each opportunity, he wasn’t just solidifying himself as the clear-cut starting running back. He was on a mission to prove that he was ready for the NFL.

He certainly proved his point. It took just 12 games—only five of which he received at least 50% of the team’s carries—to show he was ready. In fact, after Vaughn capped off his redshirt junior season with a jaw-dropping, 13-carry, 243-yard and two-touchdown performance in the 2018 Texas Bowl,  fans were pleasantly surprised to hear he’d return for his senior season.

Over the course of just two seasons, Vaughn made a case—a very legitimate one—for why he could be the best running back in school history. Now, he enters the NFL Draft and is projected to hear his name on Day Three. Occasionally, you’ll stumble upon a site that says Day Two. Call me crazy, but I think these projections are criminally low. Vaughn might be one of the best-value skill players in the Draft.
By the numbers

Vaughn has been making the most of his opportunities since 2015. In his first year at Illinois, the consensus four-star recruit started just five of the 11 games he played, but still led the team in carries (157), rushing yards (723) and touchdowns (6). His inaugural season was impressive enough to see him named Illinois Offensive Newcomer of the Year, but with Lovie Smith named Illini head coach in 2016, Vaughn’s role in the offense all but disappeared.

That’s when the Pearl Cohn graduate—once labeled the 9th-best prospect in Tennessee after earning All-State, All-Conference, All-City and 2014 Tennessee Gatorade Player of the Year honors—decided he’d return home to revitalize his collegiate career.

Once again, Vaughn made the most of the opportunity. He bulked up from 205 lbs. to a hefty 218 lbs. during his redshirt season and returned with a vengeance in 2018. Vaughn took the same number of carries as his freshman year, but tallied 521 more rushing yards. He hauled in three fewer receptions than he did in his freshman year, but turned it into 51 more receiving yards. His average yards-per-carry increased from 4.6 to 7.9, his average yards-per-catch increased from 7.4 to 13.1 and, lest we forget, he did so in the almighty Southeastern Conference. The 2018 Commodores faced the 21st toughest strength of schedule in the country, according to Sports Reference, while the 2015 Illini had ranked only 41st.

In 2019, Vaughn’s production took a slight hit due to poor quarterbacking, questionable play calling and extremely poor blocking. While this ultimately helped showcase his durability—a previous concern among analysts—it dropped his yards-per-carry from 7.9 to 5.2. He finished with an average of 6.4 in two years at Vanderbilt, which is still good for 15th-best in SEC history.

But there remains one discrepancy among the players in that top 15.

Vaughn, who, statistically speaking, is among the 15 most efficient rushers in SEC history, is projected to go 198th overall—far lower than the rest. If his projection holds true, Vaughn may have the best-value among draft-eligible running backs.
Measurables
Height: 5’10”

Vaughn plays to his size: he runs with physicality, and, in his two years on West End, his heavy frame was on full-display. However, he did himself no favors by weighing in at just 205 lbs at the 2020 Senior Bowl. He was previously listed on Vanderbilt’s roster at 218 lbs.; the 13-pound discrepancy meant that either the listed weight was inaccurate or he had shed quite a few pounds since the end of the season. Months later, he seemed to have gained it back, weighing in at 214 lbs. at the 2020 NFL Combine. The weight fluctuation should hardly matter, but the peculiar trend is at least worth noting.

Vaughn’s 4.51-second time in the 40-yard dash is more than good enough; his Combine numbers can really only help his case, seeing as he finished sixth among running backs 205 lbs. or heavier. For what it’s worth, his 32-inch vertical jump and 117-inch broad jump are among the bottom of that heavier-set group, but those measurements hardly matter.
Analysis
Ironically, Vaughn’s collegiate experience playing behind such a mediocre offensive line has only increased his value as an NFL prospect. While it may have taken a toll on his overall numbers, he’s had practice finding the same small holes he might see in a pro-level defense. For reference, former Georgia Bulldog D’Andre Swift—a top-ranked running back in the 2020 Draft—averaged 6.6 yards per carry throughout his career in the SEC. According to Pro Football Focus, Georgia’s offensive line ranked second in the FBS last season, finishing with the fifth-best run-blocking grade. Vaughn, on the other hand, averaged 6.4 yards per carry in his SEC career. Vanderbilt’s line ranked 128 out of 130 FBS teams, with the lowest run-blocking grade in the country.

It couldn’t have been easy to run behind an offensive line that caved in on him almost every play, but it prepared Vaughn for the next level. He’s refined his skillset to become an elite one-cut runner; Vaughn has great vision running between the tackles, allowing him to find the smallest of holes, take his first step in stride and turn on the jets to get upfield.

Vaughn used size particularly well in college, consistently evading SEC defenders by running straight through them. His physicality is second to none, and it has become commonplace to see him drag two or three defenders on his run.

Since Vaughn’s draft projections are so low, it’s tough to pinpoint concrete downsides. If a team had to forfeit significant draft capital—say, a first or second round pick—to draft him, teams may be quick to point out his subpar blocking numbers. Ultimately, if a team only has to spend a mid-Second Day or Third Day pick, there are few other skill position players with as much upside.
Projection

!function(e,i,n,s){var t=”InfogramEmbeds”,d=e.getElementsByTagName(“script”)[0];if(window[t]&&window[t].initialized)window[t].process&&window[t].process();else if(!e.getElementById(n)){var o=e.createElement(“script”);o.async=1,o.id=n,o.src=”https://e.infogram.com/js/dist/embed-loader-min.js”,d.parentNode.insertBefore(o,d)}}(document,0,”infogram-async”);
The Dolphins need help at just about every position; once they draft a quarterback, one of their biggest needs will be running back. Last season, the Dolphins’ leading rusher was 37-year-old quarterback Ryan Fitzpatrick. As if that’s not concerning enough, he had just 243 rushing yards.

Miami has a whopping 14 draft picks in 2020, so it shouldn’t come as much of a surprise if they opt to take two different running backs. This draft is incredibly deep at the running back position, so it’s unclear whether they’ll want to spend one of their three first-rounders on a top-talent. In any case, a high-upside, change-of-pace back like Vaughn would make perfect sense.