Kalija Lipscomb may not have had the senior season he’d hoped for, but the wideout still projects as a potential Day Three NFL Draft selection. 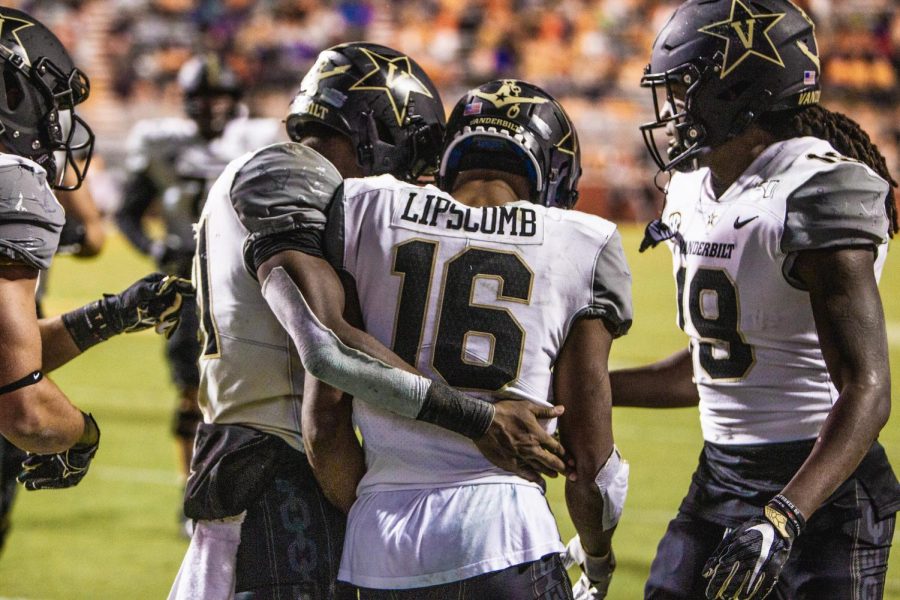 The Vols beat the Commodores 28-10 in Kalija Lipscomb's (16) last game of his college career.

Vanderbilt wide receiver Kalija Lipscomb entered the 2019 season with high expectations. Fresh off a standout junior campaign, he was named to Athlon Sports’ preseason All-SEC first-team and even made the watch list for the Fred Biletnikoff Award, presented annually to the nation’s most outstanding wide receiver. Back in August, NFL Draft experts were bullish on the New Orleans native: CBS Sports’ Chris Trapasso slotted Lipscomb 94th on his preseason big board, good for a third-round projection, and ESPN’s Mel Kiper Jr. ranked Lipscomb as the third-best senior wide receiver in the country.

Unfortunately, 2019 did not go as planned for Lipscomb – or for any member of the Commodore offense – as the Commodores finished last in the SEC in points per game (16.5), last in rushing yards per game (126.8) and second to last in passing yards per game (172). Lipscomb’s production plummeted to nearly half of what he had accomplished in 2018 and, in turn, his draft stock decreased considerably.

As the former three-star recruit prepares to turn the page on a new chapter, we evaluate his stock in the upcoming 2020 NFL Draft.
By the numbers

Lipscomb’s 2019 tally does not align with the numbers you’d expect from a future draftee. If an NFL front office opts to give him a chance, they’d have to look past his senior year – the year with the highest expectations and one of the worst performances of his career. In most cases, that’s a big ask.

But not in the case of Lipscomb. General managers should recognize the steep drop-off at the quarterback position in 2019 and evaluate Lipscomb accordingly. Four Commodore signal callers – Riley Neal, Deuce Wallace, Allan Walters and Mo Hasan – completed a combined 53% of their passes (117th in the country) for an average of 172 passing yards per game (115th in the country), all while holding a one-to-one touchdown to interception ratio. Lipscomb may not have produced, but it’s hard to give him all the blame.

Ultimately, Lipscomb will still enter the NFL Draft with his name etched in Vanderbilt school history books, as his 22 career touchdown receptions ranks second in school history and his 2,356 career receiving yards ranks eighth in school history. Perhaps the most telling of his future, however, is his 198 career receptions. This tally is good for not only fifth in school history, but 13th in SEC history (since 1956). His 2018 season, during which he led the SEC in receptions, serves as palpable evidence of what Lipscomb can accomplish when given the opportunity. Former offensive coordinators Andy Ludwig and Gerry Gdkowsi felt comfortable lining him up in the slot or on the boundary, and his versatility can provide value to an NFL roster. Lipscomb has the ability to line up in various sets and even contributed to Vanderbilt’s rushing attack in 2018, tacking on 14 carries for 75 yards. If he’s forced to vie for a roster spot, Lipscomb can even find his way as a kick-return specialist. In his freshman and sophomore seasons, he returned 24 punts for an average of 9.7 yards and three kickoffs for an average of 16.3 yards.
Measurables
Height: 6’0”

Lipscomb may have the versatility to compete at the highest level, but at just six feet tall, his physical stature begs an array of questions. Is he fast enough to keep up? Is he strong enough to play at the line of scrimmage? Can he rise above a taller defensive back to pull down a ball?

The answers to these questions seem clear as mud. Prior to the NFL Combine, NFL analysts were concerned with Lipscomb’s measurables. Frankly, his performance didn’t really help his case. Lipscomb finished firmly in the lower half of the 2020 wide receiver class with a 4.57 second 40-yard dash. At just six feet tall, he’ll likely be held to a higher standard for speed–one that he failed to meet, as he finished dangerously close to last among receivers six feet or shorter.

Lipscomb’s 32-inch vertical jump ranks 43rd of 46 receivers that tested, and his 16 bench press reps slots him in the lower half of the pack. His 127-inch broad jump was his only positive mark, which tied for sixth of 43 prospects that tested.

Again, Lipscomb did not improve his draft stock with a rather poor NFL Combine. That said, things could’ve been worse (see: Jared Pinkney). At the very least, NFL teams won’t pass on him solely because of his combine performance.
Analysis
No expert, analyst or scout will tell you to draft Lipscomb because of his above average broad jump. Nor will they tell you that his Vanderbilt statistics are necessarily eye-opening. Instead, those who have watched Lipscomb closely can see value just by watching his film.

Lipscomb has excellent hands at the catch point, which would serve him well playing in the slot at the next level. According to Pro Football Focus, he’s converted on 22 of 39 contested catches in the last two seasons. As Vanderbilt’s top-receiver, it became commonplace for Lipscomb to pull down 50-50 balls against some of the SEC’s best defensive backs.

In addition to having sublime hands, Lipscomb is a creative, smooth route runner who can develop small openings for himself. He may not have breakaway speed, but his excellent technique and ability to shake tacklers gives him a plethora of tools to fight for extra yards. Despite being covered, and often doubled, by talented, athletic corners, Lipscomb managed to break 18 tackles on just 45 total receptions last year.

In 2019, the Philadelphia Eagles’ three top pass catchers tallied an underwhelming 916, 607 and 509 yards, respectively. To make matters worse, none of the three – Zach Ertz, Dallas Goedert and Miles Sanders – were wide receivers. The Eagles’ leading wide receivers were Alshon Jeffrey and Nelson Aghlor. Neither receiver eclipsed 45 receptions; neither receiver surpassed 500 yards. Philadelphia fired former wide receivers coach Greg Lewis and replaced him with Aaron Moorehead, who held the same post at Vanderbilt the past two seasons.

Philadelphia needs some serious help at the wide receiver position, and PhillyVoice Eagles beat writer Jimmy Kempski sees a strong likelihood that they use two or three of their eight picks on receivers. Furthermore, Moorehead coached Lipscomb to the best season of his Vanderbilt career in 2018. Expect him to monitor his former pupil on day three of the draft.