Leiter shines again amongst a slew of great freshman performances as the Commodores breeze past the Aces. 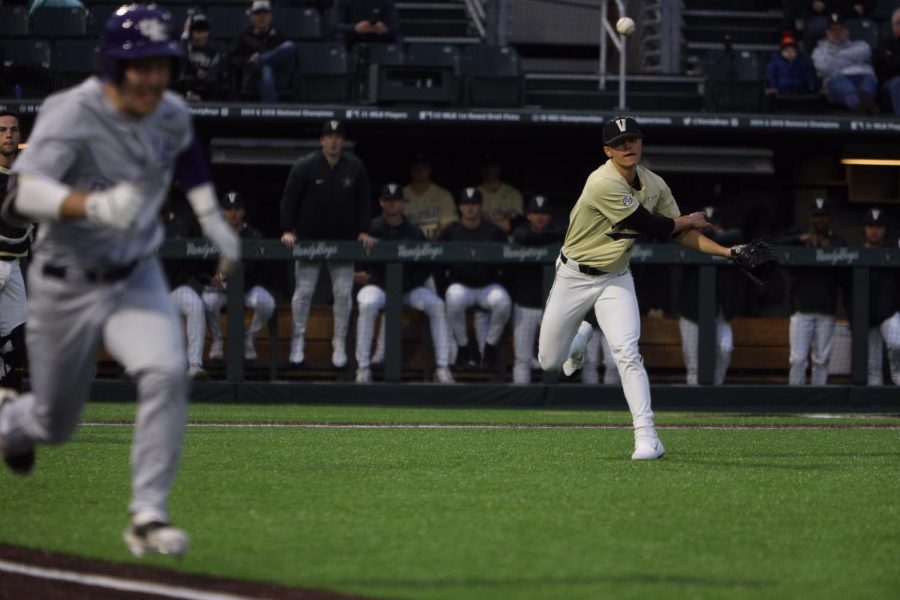 The Vanderbilt Commodores extended their win streak to six with a 6-0 shutout of the Evansville Aces on Tuesday, moving them to 7-2 on the year. Coming into this matchup, the Aces were a struggling squad at 0-7 looking for their first win against the No. 2 Commodores.

With freshman phenom, Jack Leiter on the mound for Vanderbilt, hopes of a win quickly fell out of the question for Evansville. By going five innings, giving up just one hit and no runs, Leiter continued to impress the Vanderbilt faithful.

Vanderbilt’s bats were firing on all cylinders on Tuesday as well, with four players registering multi-hit games and Austin Martin blasting his first home run of the season with a shot to the left-field bleachers.

It was a strong showing from the Commodores overall, as they continue to take advantage of non-conference opponents and begin to regain the swagger of last year’s national championship team. The pitching staff allowed only three Aces hits which was no match for the Commodores 11.

Jack Leiter continued his freshman year dominance on Tuesday, registering his second win of the season. In two outings, Leiter has registered 10 innings while allowing only one hit, no runs and striking out 16 batters. He gave up his first hit of the season on a bunt in the third inning on Tuesday, but other than that bunt and three walks, Leiter controlled Aces hitters using a dynamic fastball that topped out at 96 mph on Tuesday. Opposing batters are now hitting 1-30 against the freshman.

However, his day was once again cut a bit short. In the fifth inning, he walked two batters, displaying a lack of control, that prompted Coach Corbin to remove him from the game after only 74 pitches.

Other than Leiter, several Commodore freshmen had productive days at the plate. The duo on the left side of the infield, shortstop Carter Young and third basemen Parker Noland, excelled in Tuesday’s matchup against Evansville.

Noland logged two singles, bringing his average up above .300, and scored the first run of the game as well off of a ground out from Ty Duvall in the first inning.

Young went 3-4 with a double and an RBI putting him at 8 RBI’s on the season which paces the Commodores. In the bottom of the sixth, Young extended the Commodores lead to four with a single up the middle that scored Harrison Ray, who just before, swiped his fourth base of the year to setup the scoring opportunity.

The duo has also impressed in the field, where they have been clean with the help of veteran second baseman, Harrison Ray.

“It takes a little bit of getting used to, playing with a guy the same age as me, but playing with [Harrison Ray] up the middle, he tells us what to do,” Carter Young said about senior Harrison Ray’s leadership.

In the bottom half of the seventh, Isaiah Thomas showed off his power with a huge two-run home run to centerfield. And that was all the scoring the Commodores needed to easily finish off the Aces.

“The ball was really traveling, but that was a two-strike at-bat, it was the middle part of the field. He really has some strength in his hands and he showed it” Coach Corbin said on Thomas’s display of power.

The Commodores were able to capitalize with runners in scoring position in the middle part of this ballgame which made it smooth sailing for relief pitchers Michael Doolin and Chris McElvain.

After Leiter’s fifth-inning exit, Doolin continued smoothly through to the seventh, only giving up two hits and striking out four. McElvain closed out the last two frames, coming back from a tumultuous start to the season by giving up no hits and easily leading Vanderbilt to their sixth win in a row.

The Commodores are back in action tomorrow at Hawkins Field against the Saint Louis Billiken’s as they look to extend their win streak to seven.