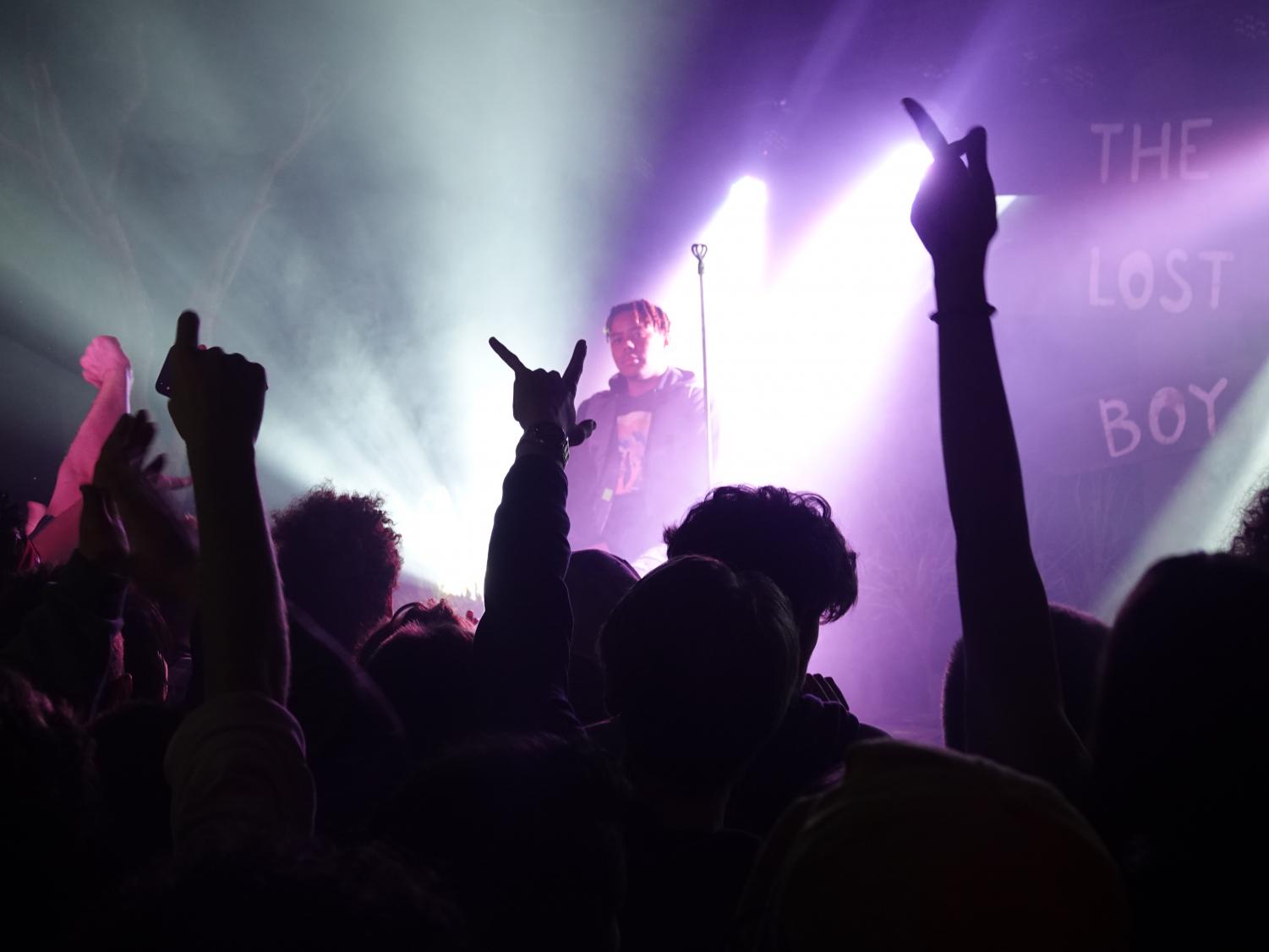 Balancing a mosh pit with steady R&B: YBN Cordae shows he can do it all at The Basement East

This rapper certainly did not disappoint in his Feb. 24 Nashville performance of his 2020 tour.

Oh, YBN Cordae. Admittedly, this Maryland rapper is a far stretch from the traditional Nashville music vibe, but there was no way I was going to miss his debut in the great state of Tennessee. His tour follows the release of his most recent album, “The Lost Boy,” which deviates from his previous releases with its R&B vibe. In addition to his risky style change, the album’s intense lyricism has made it his most successful work to date. As an artist, YBN Cordae straddles the line between hard rap and low-key R&B, and this paradox was definitely reflected in his performance. Just ask my camera—the spontaneous mosh pits put us both in quite the precarious position.

The venue at The Basement East matched the vibe of these performers perfectly. The lack of assigned seats or a designated VIP section made for a super intimate setting. Everyone was in the thick of it together, making for a super inclusive environment of fans. The venue had low lighting throughout and might remind you of the kind of concerts you find at Terminal 5 in New York City.

Two fellow rappers, LONR and 24kGoldn, opened for YBN Cordae. The latter definitely did his job—getting an energetic response from the crowd for his performance of pregame classics like “VALENTINO,” which properly hyped them up for Cordae. That being said, as I looked around the crowd during the pre-shows, I couldn’t help but notice that it was an overwhelmingly male audience. I don’t think I’ve ever been that outnumbered by men at a concert or any venue, period. It wasn’t necessarily an issue (besides the frequent, testosterone-fueled mosh pits), but it wasn’t the audience I expected from these rappers.

After 24kGoldn closed off his high-energy performance, there was what felt like a massive gap before YBN Cordae’s entrance. Maybe it felt longer than it really was, due to my overexcitement, but the concert began at 9 p.m., and the main performer didn’t hit the stage until 10:15, so there was definitely a wait. A frat party-esque playlist blared from the speakers in the meantime, so my fellow photographer and I were easily distracted. But at one point, they really misread the crowd and tried to play a Hannah Montana throwback. Talk about killing the vibe.

At last, the heavenly curtains of The Basement East were opened, and YBN Cordae took his spot in the limelight. He started off his set staying true to his roots. Before establishing himself as an artist, Cordae made successful covers of famous singles by artists like J.Cole. He started off with one of these crowd favorites, the Eminem-spinoff “My Name Is.” It didn’t take long for the rapper to get sentimental, citing his growth as an artist from his 15-year-old self to today, and sharing his high aspirations for what’s still to come in his career. Calling out the “day-one” fans in the crowd, he promised that in a couple years, he’d be selling out Bridgestone Arena across the street, but we’d still be the “O.G.’s.”

YBN Cordae’s early career kicked off with a tour alongside his close friend, the late Juice WRLD. He made a touching tribute to his passing, hoping to continue his legacy by making strides in the rap landscape. The crowd received his message and reciprocated his energy when he played his friend’s popular release, “Lucid Dreams.”

The mosh pit subsided when YBN Cordae finally arrived at my personal favorite album, “The Lost Boy.” The crowd earnestly turned on their flashlights and swayed along to lyrically-rich “Lost Boy” and “Thanksgiving,” and the slower beats highlighted the artist’s true talent as both a singer and songwriter. After having heard our fill of his soulful tunes, there was one song the crowd was waiting for: the J.Cole-produced, playful rap beat “RNP.” Easily the most popular release of the album, the entire audience was able to sing along to the bouncy rhymes of the song. YBN Cordae didn’t call it quits there, however. Nope! Instead, the rapper called up an audience member (Daniel) and challenged him to rap the lyrics of the popular single on stage with him. It is safe to say that he totally killed it, earnestly accepting a towel and water bottle from the stage aid after his adrenaline-fueled performance. Once he jumped off stage, Cordae encouraged the crowd as we emphatically chanted Daniel’s name.

Going to concerts like this one reminds me of the talent behind the R&B and rap genre. At mass-produced, global concert tours delivered by top-50 singers, overproduction can often lead to heavy lip-syncing and performances that err more on the side of entertainment than musical songwriting. YBN Cordae is a rapper with a genuine talent for writing impactful lyrics that get the whole crowd in their feelings, and he was able to sing them a-capella without the clouds of autotune. Whether you’re trying to get hyped up for Broadway or you’re spending a night in, check out YBN Cordae to be reminded of how R&B and rap were meant to sound.