A career-high 34 points from Saben Lee was not enough for the Commodores to beat Anthony Edwards and the Georgia Bulldogs. 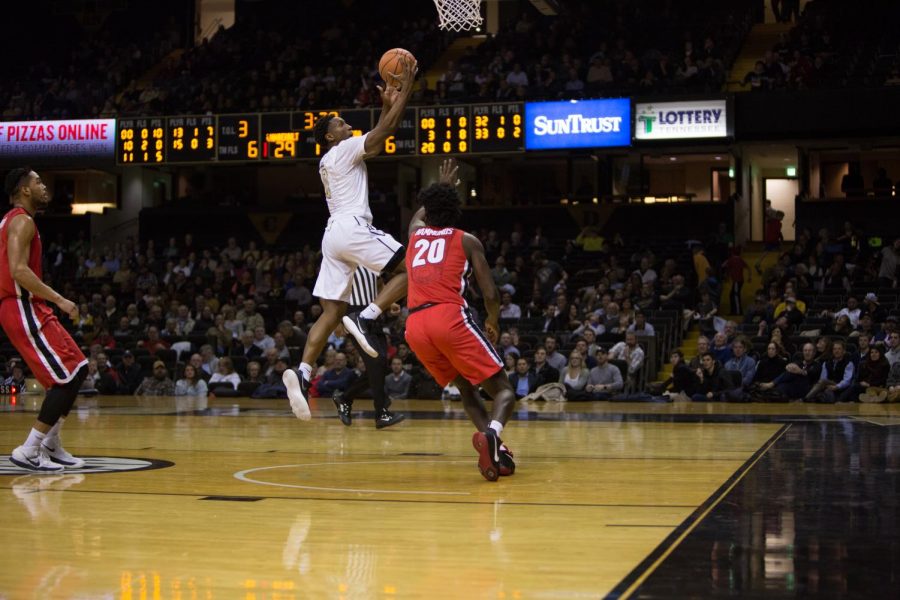 In a game the Commodores (9-18, 1-13) seemed destined to win, Georgia guard Tyree Crump sucked the life out of Memorial Gymnasium with a deep three-pointer as time expired that gave the Bulldogs (14-13, 4-10) a win in Nashville, 80-78. Coach Stackhouse and the Commodores fought hard and seemed to do enough to win the game, but it was not to be on Saturday night.

“On a special day like this, with dedicating 25th avenue to Perry Wallace, it just felt like everything was right for us to have a good ending tonight,” Stackhouse said after the heartbreaker. “But it’s part of big time sports; you have to continue to pick yourself up and keep your head high, and that’s what we are going to do.”

In a controversial call with just 11 seconds left in the ball game and the Commodores up three points, Vanderbilt guard Braelee Albert grabbed an offensive rebound off of a missed free throw and was deemed out of bounds by the nearest official. Had Albert been ruled in bounds, which would have been the correct call upon further review, it is likely the result of this game would have been different.

“I think Braelee gets an offensive rebound and clearly he is in bounds, then it’s just a phantom call to call it the other way,” Stackhouse said of the play.

But, in the end, a handful of factors led to a heartbreaking loss for the Commodores. Up one with seven seconds to play, Scotty Pippen Jr. missed two free throws, opening the door for Georgia. Crump closed it with a prayer from 30-plus feet away that fell through the bottom of the net right after the buzzer to steal a win for the Bulldogs.

“A couple bad breaks. I thought we did enough to win this game. Factors outside of this game helped us lose this game.” Stackhouse said following the loss. “We have to keep fighting, keep trying to build and keep the guys’ confidence.”

With a peculiar 5 P.M. start time, both teams came out sluggish. They traded missed shots and a handful of turnovers before Pippen Jr. got the scoring started.

Pippen Jr. and forward Dylan Disu hit threes, and Saben Lee finished off a smooth drive and slam that gave Vanderbilt the early lead. The Commodores guards were aggressive all night, getting into the paint and looking to draw fouls against larger Bulldog defenders.

Vanderbilt came out with a strong game plan to combat Georgia’s superior size and athleticism. With a pesky half-court trap, Commodore guards forced several early turnovers with deflections, and guard Max Evans prevented Georgia’s phenom, Anthony Edwards, from scoring a single point for the first nine minutes of the game.

The Commodores mounted a 13-2 run that gave them a lead as large as 11 in the first half, but Georgia began chipping away at the Commodores’ lead in the middle of the frame, thanks to future top-five draft pick Anthony Edwards.

Edwards used his beautiful pull-up jump shot to hit a seemingly impossible three pointer over Max Evans, and after multiple offensive fouls on Vanderbilt, Georgia cut their deficit to under five late in the first half.

With Pippen Jr. and Disu both playing less than ten minutes in the first due to foul trouble, Coach Stackhouse was forced to turn to his walk-ons and let Saben Lee carry his team.

Guards Jon Jossell, Isaiah Rice and Drew Weikert all played first half minutes, and in one of the coolest sequences in recent Vanderbilt basketball memory, Weikert finished off the Commodores’ stellar first half with a huge bucket. He stripped Edwards, laid in his first points in the black and gold and gave Vanderbilt an eight-point lead at the break.

Weikert at the buzzer

Lee and Edwards battled back and forth over the course of the night. Both provided numerous highlight reel moments, but Lee’s 22 first half points outshone Edwards.

After a massive and-one dunk from Edwards, Lee used his shiftiness and finishing ability to score twice at the rim, including an and-one layup of his own. Lee continued to force the issue on Georgia’s defenders and finished the first with over half of Vanderbilt’s 40 total points.

The Commodores shot an efficient 62 percent in the first half and did not rely on the three point shot, which has been a staple in their offense for most of this season, mostly because of the success Saben Lee had at the rim.

Georgia head coach Tom Crean immediately looked to establish his forward Rayshaun Hammonds early in the second half. After an easy layup from the Bulldogs’ second leading scorer and a transition layup, Georgia cut the Commodore lead in half.

But after sitting most of the first half, Pippen Jr. came out as aggressive as he has been all year and dominated the second half. He finished the game with 20 points, 16 of which were scored in the second. He finished multiple times over larger defenders and converted on 3-4 attempts from beyond the arc.

And Lee picked up right where he left off in the first half. He continued to dominate at the rim and in the paint, finishing floater after floater and tough layup after tough layup.

A quick 12-0 Bulldog run highlighted by dominance on the glass and a deep Edwards three helped Georgia retake the lead for a brief period of time. But after back-to-back threes from Pippen Jr. and Max Evans and yet another lay in from Lee, the Commodores seemed to be in control.

As the teams traded baskets late in the second half, Pippen Jr. continued to be the go-to option for Vanderbilt. He hit two huge threes and after splitting two defenders, threw down a massive dunk that electrified Memorial Gymnasium.

He then served up a perfect alley-oop pass to Saben Lee for a jam that helped keep Vanderbilt up seven and followed it up with a deep two at the end of a shot clock.

But the Bulldogs answered, cutting the Vanderbilt lead to just one thanks to a Jordan Harris three and a Savhir Wheeler layup. Harris finished with 17 points and was the sidekick to Edwards all night long.

Two clutch free throws from Lee at the other end put Vanderbilt back up three, and after a missed Rayshaun Hammonds three, Lee once again stepped to the line with 22 seconds remaining to try and move the Commodore lead at five.

Lee calmly drained both free throws, but after a quick layup from Georgia’s Wheeler, the Commodores held onto a mere three point lead. After Lee missed the front end of a one-and-one, Vanderbilt surrendered two more free throws to Wheeler before Pippen Jr. was grabbed and awarded a chance to ice the game at the line.

The rest is history.

“It happens. It’s the game. Neither one of them wanted to miss [free throws]. They wanted to step up there and close the game. But again, it’s just a part of their growth,” Stackhouse said of Lee and Pippen Jr.’s missed free throws.

Despite having one of their best shooting nights of the season, the Commodores were still unable to close out the win. Their field goal percentage hovered around 60 percent for the better part of the game. Vanderbilt employed a much more paint-focused offense, shooting only 15 threes in the game but still capitalizing on 7 of them.

The Commodores got strong performances from a variety of players, but it was Lee’s career high that stood out. Lee was dominant, scoring an efficient 34 points on 17 shots en route to a new career-high, but it was not quite enough.

Lee and Evans defended Anthony Edwards well all night, but the freshman still scored 19 points despite eventually fouling out.

“I thought Max did a really good job on him. Saben had him for stretches when he is bringing up the ball,” Stackhouse said. “I thought we made him work. He is a big time talent and he is going to get his.”

Vanderbilt will look to bounce back from Saturday’s loss when they host the Missouri Tigers on Feb. 26 in Nashville.