‘I just don’t understand using the fact of a pre-clearance process as a fact not to be forthcoming’: former National Security Advisors Susan Rice and John Bolton discuss impeachment testimony, foreign policy and more at Chancellor’s Lecture Series event

After serving as National Security Advisors to various presidential administrations, Rice and Bolton came to Langford Auditorium, speaking to a sold-out house about their experiences in the role and weighing in on future implications of foreign policy decisions. 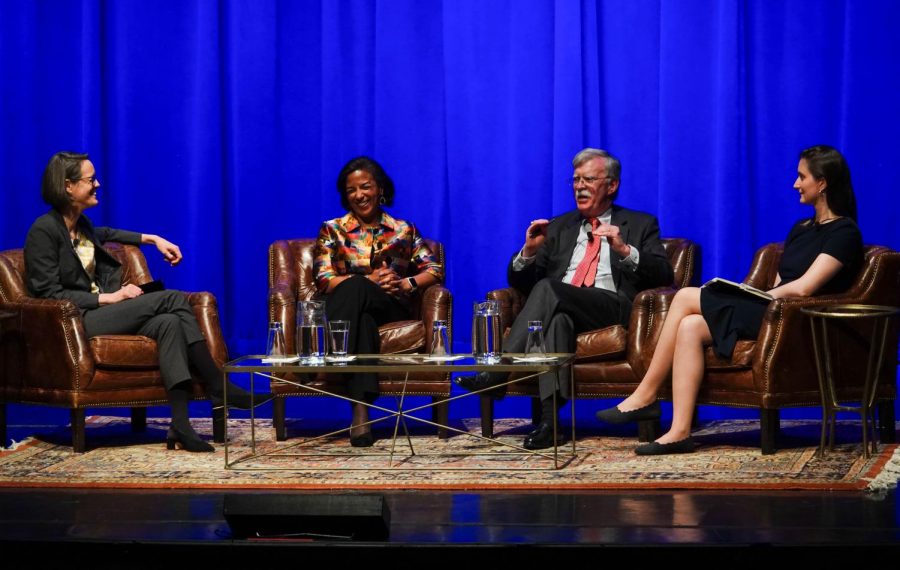 Everything from impeachment proceedings to future consequences of foreign policy were discussed at the Feb. 19 Chancellor's Lecture Series event.

Susan Rice, National Security Advisor during the Obama administration and 27th Ambassador to the United Nations, opened the evening by explaining the chief responsibility of a National Security Advisor as chairing the Principals Committee of the National Security Council, the Cabinet-level decision-making committee which makes recommendations to the President. In a further explanation of her duties, she compared it to being the point guard on a basketball team that has to “see over the whole court” while also “passing the ball to big shooters.”

John Bolton, who served as 25th Ambassador to the United Nations and National Security Advisor under Trump until he resigned from that role Sept. 10, agreed with Rice on the point guard point. He added that the job should be tailored to match the contemporaneous administration. But as the event transitioned into a discussion of events surrounding Congress’ impeachment proceedings, Bolton and Rice began to diverge.

“I’ll be honest. It’s inconceivable to me that if I had firsthand knowledge of a gross abuse of Presidential power, that I would withhold my testimony from a Constitutional accountability process,” Rice said.

Bolton responded by saying that the proceedings put him in a difficult position and that he believes the House of Representatives erred by being consistently partisan during the impeachment process.

Furthermore, he cited the White House pre-screening of the book as a reason for his silence. Rice, as an author who also went through the pre-screening process while writing her first book, held that such pre-screenings would in no way have stopped her from exercising her First Amendment rights to free speech.

“I will bet you a dollar right here and now my testimony would have made no difference to the ultimate outcome,” Bolton said.

Aside from discussions of impeachment proceedings, the pair also talked about the significance of regime changes on the future of foreign policy. As an example, they discussed the impact of inviting the Taliban to meet with Trump at Camp David. Bolton responded by saying that advisors were not afraid to speak their minds, but that the Trump administration did not care about what they had to say.

“The only expression I heard was that it never mattered,” Bolton said.

On Feb. 20, the Vanderbilt Faculty Senate hosted a community conversation discussing themes from the event. The discussion was led by the Faculty Senate’s vice chair Brian Heuser as well as political science professor Emily Ritter and economics professor Kamal Saggi. The conversation centered around how to draw the line between uniquely American national interests and global interests. Members also focused on how leadership impacts the United States’ image in the eye of the international community.

The Chancellor’s Lecture Series will continue on Mar. 15 with a keynote speech and Q&A featuring journalist Anderson Cooper. Ticket reservations for the event will be available soon.