Smith, Doolin dazzle on the mound, guide Commodores to 4-0 win

Vanderbilt shut out the South Alabama Jaguars on the backs of standout pitching for the second consecutive evening to move to 3-2 on the season. 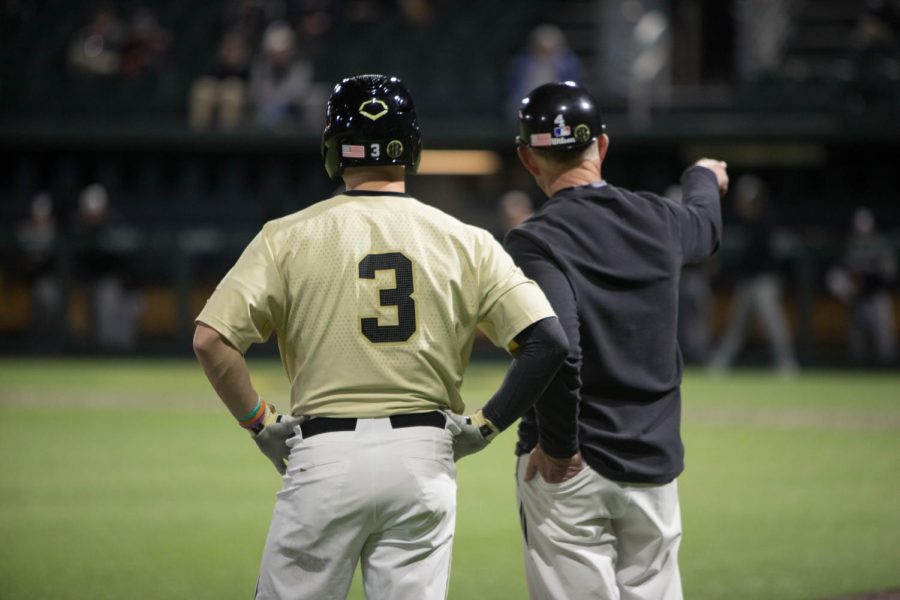 Cooper Davis (left) and Tim Corbin (right) share a conversation at third base.

Jack Leiter and Thomas Schultz’s combined two-hit shutout with 19 strikeouts on Tuesday night made for a tough act to follow.

On Wednesday night, in the second half of a two-game set against the South Alabama Jaguars, Ethan Smith and Michael Doolin gave Leiter and Schultz a run for their money.

Smith, in his first start of the season, put together another masterful performance, throwing no-hit innings in four of his five frames. He’d finish the game with a line of 5 IP, 2 H, 0 ER, 0 BB, 7 K.

“We just came in with a good plan,” Smith said. “We executed what we had coming off yesterday and it gave us a good idea of what we needed to do to just come in and execute now.”

Vanderbilt Head Coach Tim Corbin turned to the bullpen in the sixth, and just as Schultz kept the train running on Tuesday, so too did freshman right-hander Michael Doolin on Wednesday. Doolin tossed four shutout innings, striking out seven more batters and completing the midweek sweep.

“We call it hitting ice, where it kind of gets to that last couple feet of the plate and really feels like it takes off,” catcher Ty Duvall said of Doolin’s fastball. “Batters tend to miss under it, and he was also landing that breaking ball in any given count. As a freshman in his first time out there, he did a really good job of keeping his composure.”

In the two-game sweep of South Alabama, the Commodores threw 18 shut-out innings, giving up just four hits and striking out a whopping 35 Jaguar hitters.

“We got 18 innings and just two walks I believe, and no errors. Anytime you do that you give yourself a chance,” Corbin said of his team’s series performance. “When you pitch like that and you play defense like that, you have a tendency to keep people off the scoreboard.”

Duvall provided the offense for Vanderbilt in his first action behind the plate in 2020. His two hits were the most in the game and helped spark rallies in the fourth and sixth innings.

Right from the outset, it became clear that the game would mirror the pitchers’ duel that occurred a day ago. Smith struck out the first three batters he faced, and Duvall made up for a dropped third strike by ending the inning on a strike-’em-out, throw-’em-out double play.

Vanderbilt threatened in the first, as a walk to Austin Martin and a single off the bat of Cooper Davis gave Vanderbilt early life. South Alabama pitcher Caleb Yarborough plunked Ty Duvall to load the bases, but Isaiah Thomas and Justyn-Henry Malloy couldn’t bring the runs home, striking out to end the inning.

The Jaguars found a scoring opportunity of their own in the top half of the second inning. Cleanup hitter Kaleb DeLaTorre led off with an infield single, and with two outs, designated hitter Preston Welchel laced a ball to deep right field over the head of Thomas. Vanderbilt executed a perfect relay, though, as Thomas, Harrison Ray and Duvall teamed up to cut DeLaTorre down at the plate and keep the game scoreless.

The team’s traded 1-2-3 innings from there. Smith settled in, retiring the next 10 batters he faced before exiting the ball game. Yarborough, for his part, retired six in a row.

Vanderbilt finally found the scoring column in the bottom of the fourth. Duvall and Thomas knocked a pair of singles to lead off the inning, and a walk to Malloy loaded the bases with nobody out. Noah Michael, in relief for Yarborough, limited the damage for the most part. Noland’s sacrifice fly plated Duvall to give Vanderbilt a 1-0 lead. That’s all Michael would give up, though, keeping the deficit at just one.

Doolin relieved Smith in the sixth and struck out the side in his first inning of collegiate work to bring the bats back to the plate for the Commodores.

This time, they broke through.

Duvall’s second hit of the game set the table for Vanderbilt, as he poked one the other way to left field for a single.

“I think that’s something that’s always been my strength is being able to take the ball the other way,” Duvall said. “I just don’t think you can let pitchers live out there, so as soon as I get a fastball away I try to stay that way. That’s typically the approach I have and it keeps me on time for other pitches too.”

Malloy followed suit, lacing a base hit to left to give the Commodores runners on first and second with one away. After a walk to Ray loaded the bases, nine-hole hitter Carter Young lined a fastball to deep left field with two outs. South Alabama left fielder Ethan Wilson retreated, but the ball went in and out of his glove, allowing all three runners to score and giving Vanderbilt a commanding 4-0 lead.

Doolin made quick work of the Jaguars in the seventh and eighth innings, entering the ninth looking to put the finishing touches on a near-perfect debut. After allowing a single to Hunter Stokes, Doolin quickly retired the next three hitters to finish the job.

Vanderbilt will look to make it three in a row on Friday when Tim Corbin’s team begins a three-game series with Illinois-Chicago at Hawkins Field.