Junior Maxwell Evans has stepped into Aaron Nesmith’s shoes and produced for a Commodore team desperate for offense. 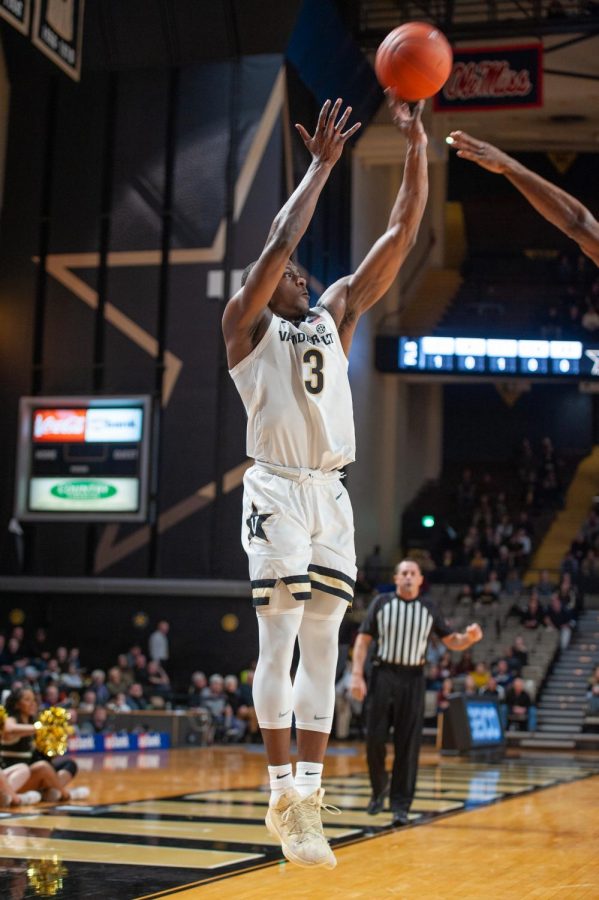 After playing at an All-American level and pouring in 23 points per game, Nesmith fell to the fate of Garland and was sidelined for the season after playing just 12 games. Head Coach Jerry Stackhouse found himself with a gaping offensive hole to fill, and to do it, he has turned to a platoon of scoring options.

“We were Aaron left, Aaron right, Aaron up the middle. We had to try to incorporate a few other guys into what we were trying to do,” Stackhouse said after the Commodores upset against LSU. “I think we have done some things that have helped everybody.”

After playing about 13 minutes per game in his first two seasons on West End, Evans has been thrust into a larger role this year under Stackhouse. He is playing 26 minutes per night and has scored in double figures seven times, matching his total double digit scoring efforts from his first two collegiate seasons.

Evans has always been one of the Commodores best defenders, but through substantial off-season growth to his offensive game, he has become arguably Vanderbilt’s best two-way player.
Toughness and Defense
During his first two seasons with the Commodores, Evans was primarily used as a defensive stopper against opposing team’s best guards, and this season has been no different. Defense has continued to be Evans’ calling card, and it’s why he has remained a starter for almost every game this season.

With his long arms and athleticism, Evans has frustrated opposing guards. But it’s his savviness and positioning that has been a weapon against inexperienced SEC backcourts.

Several times against Kentucky, Evans was able to swiftly evade hard screens from Nick Richards in order to force contested jump shots from Tyrese Maxey. With great anticipation, and knowing where the ball is at all times, Evans is able to get close to his man and fight through opposing players screens.

In addition, he relies on his feet to play defense, rather than his hands. Most young defenders tend to think too much about where their arms are relative to their opponent on defense. But really, it is quick feet that enable a defender to stay in front of offensive players and Evans does a fantastic job keeping his feet square to his opponent.
Filling Nesmith’s Shoes
Stackhouse has shown an impressive ability to draw up creative offensive sets for his shooters. Early in the season, Nesmith was the beneficiary of these uniquely designed sets. Whether it was elevator screens, off-ball screens, or cuts across the free throw line, Stackhouse found ways to get Nesmith free for quality three point looks.

Stackhouse is looking to implement an NBA style offense that focuses on three point shots, layups, and free throws. And despite his best scorer going down, he has not deviated from this strategy. To stay committed, he has turned to Evans to run many of Nesmith’s sets on offense. And what this has done is not only get Evans open looks, but it has changed the way he plays on offense.

Against LSU, Stackhouse found numerous ways to get Evans involved. In a set Aaron Nesmith ran consistently early in the year, above, Evans runs from the opposite corner, weaves between two screens, and hits a wide open three pointer to extend Vanderbilt’s first half lead.

And as defenders have begun to recognize his prominence in the Commodores offense, Evans has adjusted his game to feature a nice pump fake. Below, he catches a cross court pass, pump fakes and swishes a simple mid-range shot off of a singular dribble. This was not a move he had in his game last year, but now, he has the confidence to create his own offense.

Development Off the Ball
A final area of development for Evans has been off the ball. When playing with two probing point guards, such as Saben Lee and Scotty Pippen Jr., it’s important for wing players to cut to the basket or find open space on the perimeter in order to receive passes.

And against LSU, that is exactly what he did. Numerous times, Lee and Pippen were able to penetrate the Tiger defense and kick to Evans who was always shot ready.

“I just work on those shots everyday so for me, I just had to translate it to the game. Thanks to the guards getting their feet in the paint and kicking out to me,” Evans said following his 31 point effort.

On the play below, after a Jordan Wright offensive rebound, Evans skipped the ball cross court to Dylan Disu, then relocated to a comfortable spot on the wing, waited patiently and nailed a big three for the Commodores in the first half against Kentucky.

Evans’ growth over his three years at Vanderbilt is impressive. He has expanded his game to be more versatile and has accumulated more playing time because of it. Stackhouse has given Evans the chance to be more aggressive and take more shots, and he has risen to that challenge.

With continued improvements to his three point shot, Max Evans can be a valuable starter for the Commodores moving forward. He is only a junior and will certainly be back on West End next season as one of many intriguing pieces for Jerry Stackhouse to play with.