After a first half that saw them score just 27 points, the Wildcats notched 51 in the second to earn the road win.

Maxwell Evans finishes over EJ Montgomery in the early moments of Vanderbilt's loss to Kentucky.

Just 13 days ago, Vanderbilt found itself up seven heading into the locker room at Rupp Arena, only to watch the Kentucky Wildcats roar back and pull away late in the second half for the victory.

On Tuesday night in Nashville, history repeated itself.

Vanderbilt led by 14 late in the first half and entered the break up nine. Just like they did on Jan. 29, though, the Wildcats flipped a switch in the second half and came away with a 78-64 road win.

The Commodores fought hard to climb back into the ball game in the final minutes, but a pair of threes from Immanuel Quickley sealed the deal.

“Tonight obviously was a tough game and a tough second half for us,” Head Coach Jerry Stackhouse said in the post-game press conference. “When we did have opportunities, we squandered some at the foul line. Against a team like Kentucky, you have to be really good and I didn’t think we were really good in the second half.”

Kentucky guard Tyrese Maxey led the way with 25 points on 10-17 shooting and Ashton Hagans finished two assists shy of a triple-double. For Vanderbilt, four starters finished the game in double figures, including Dylan Disu, who’s 12 points and 10 rebounds gave him his fourth double-double of the season.

The Commodores came out of the gates hot, finding shooters early and hitting four of their first nine threes. Point guard Scotty Pippen Jr. got the scoring started with a triple from the wing, and a reverse layup through traffic by Maxwell Evans gave Vanderbilt an early lead. After a Saben Lee layup and a corner three from Dylan Disu, Stackhouse’s team found itself up 10-4 heading into the first timeout.

Vanderbilt didn’t slow down out of the break. Lee found Evans in the corner for another three, but Tyrese Maxey answered for Kentucky with his second three in the early moments. Evans would tack on five more points in quick succession, with a layup off the feed from Disu and then with a three-ball from the wing to build on the lead.

Vanderbilt found contributions from its bench as well. After Ejike Obinna picked up two fouls in the first four minutes, Matthew Moyer was tasked with guarding Kentucky’s 6’11” center, Nick Richards. Moyer answered the call in the first half, holding Richards to just four points on 2-6 shooting. Walk-on guard Braelee Albert also made his presence felt off the bench, drawing a charge and then nailing a corner three within one minute of checking into the game.

After Albert’s three, Richards found two points on a put-back dunk, but Vanderbilt responded with two triples, both off the fingertips of Dylan Disu, who had nine first-half points, all from beyond the arc. Disu smiled at the crowd and threw his arms in the air after hitting his second consecutive three. Minutes later, Albert drew two defenders and found Lee in the corner for another three, giving Vanderbilt a 14-point lead, its largest of the half.

A couple buckets in the paint from Johnny Juzang and Maxey cut into the Vanderbilt lead, and the double-digit lead was cut to nine after three free throws from Quickley. Heading into halftime, the Commodores clung to a 36-27 lead.

Kentucky threatened the lead out of the locker room, as Ashton Hagans and Richards, both of whom had been held in check in the first half, combined for eight quick points, capped off with a two-handed slam on the fast break from the sophomore point guard. Vanderbilt answered the pair of four-point bursts with a three from Lee and a bucket in the paint from Pippen Jr. 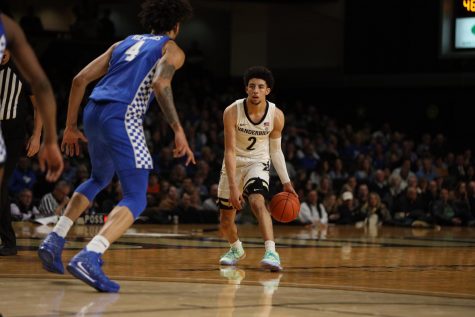 Scotty Pippen Jr. sizes up Kentucky center Nick Richards in the second half of Vanderbilt’s 78-64 loss.

Disu got the lead back up to nine with a deep straightaway three, but Kentucky continued to attack offensively. Seven straight points from its backcourt, capped off with a Quickley three cut the lead to just two. A pair of free throws from EJ Montgomery tied the game at 46-46, and Maxey’s reverse layup gave Kentucky its first lead of the game with just over 11 minutes to play.

Vanderbilt turned the ball over out of the under-12 timeout on a shot clock violation, and Maxey’s three on the ensuing possession clanged off iron twice before rolling in. Facing a seven-point deficit, Vanderbilt drew four fouls in a span of 20 seconds, ultimately turning those whistles into a made floater from Lee. Kentucky kept its foot on the gas, though. Quickley hit another triple from the corner and Maxey blew past Pippen Jr. for a layup.

“I’m not going to put it on fatigue. It’s just want-to,” Stackhouse said. “Once [Kentucky] got back into the game, they sensed that we were on our heels and took it up a notch. We’ve got to find a way to battle adversity and still be able to find that next level. That’s just part of our growth.”

Minutes later, after Maxey’s two free throws gave Kentucky a 10-point lead, Vanderbilt started to climb back. After Lee nailed a pair of free throws Jordan Wright stole the inbounds pass and quickly laid the ball in. Shortly after the Wildcats’ first turnover of the half, they’d commit another one in the backcourt, giving the ball back to the Commodores.

They couldn’t capitalize though, and Quickley drained a pair of threes to put the game out of reach with just two minutes to play.

Vanderbilt will look to bounce back on Saturday in Gainesville when they take on the Florida Gators. Tipoff is at 7:00 CT.