Just two weeks removed from a close loss to the Wildcats, the Commodores come into this matchup with an SEC win under their belts. 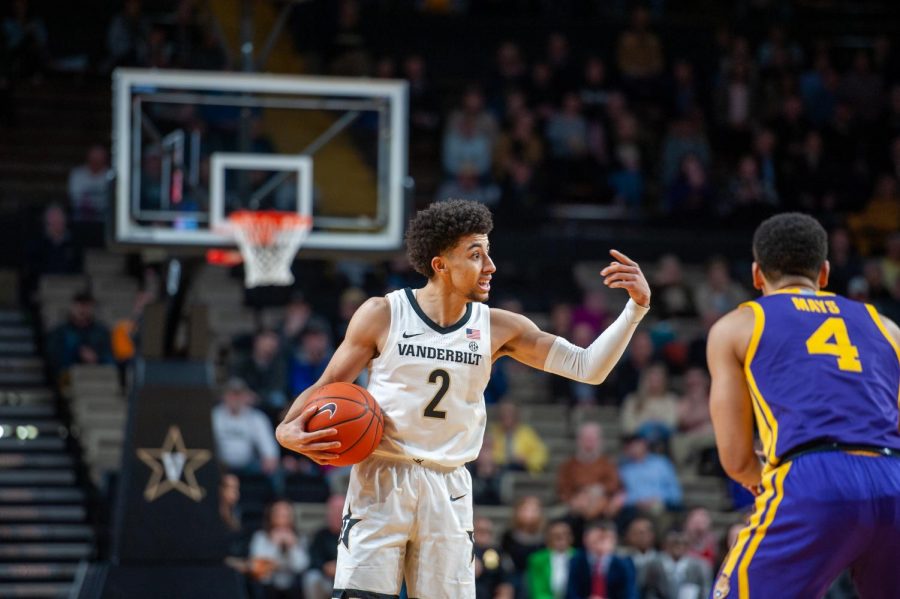 Scotty Pippen Jr. had 12 points against Kentucky in the two teams' meeting on Jan. 29.

Going into Rupp Arena two weeks ago, it was clear that a win would not come easily for the Commodores, who were still in the midst of a lengthy SEC losing streak. At the start of the year, things had looked better for the team. Aaron Nesmith was building off of a solid freshman campaign by registering historic shooting numbers while leading the SEC in points per game, Saben Lee was producing off the bench and the rest of the young, promising roster seemed excited to show off against conference rivals under the coaching of Jerry Stackhouse.

After one close loss to top-ranked Auburn, disaster struck in the form of a stress fracture. The Commodores, who were favorites against the struggling Aggies in their home stadium, woke up to the devastating news that their sophomore star Aaron Nesmith was going to miss an extended amount of time, potentially the entire season, due to a foot injury. They lost 69-50 to A&M and struggled mightily for weeks, being blown out by a multitude of solid SEC teams.

So, going into their match-up against Kentucky two weeks ago, most fans expected the worst. Kentucky basketball is constantly one of the best teams in the nation, and this year has been no exception. Despite a few disappointing losses to the likes of Evansville and Utah, the Wildcats were carrying a lot of momentum, especially after beating a ranked Texas Tech team that had played in the National Championship game just nine months prior. On paper, Vanderbilt was heavily outmatched. This was a team that had not even come close to winning a game since their star went down, challenging a team with several players expecting to hear their names called by NBA commissioner Adam Silver in June. Kentucky was supposed to destroy them.

So, when Kentucky squeaked by in a 71-62 win, everyone was shocked. Many coaches and experts scoff at the idea of a quality loss in basketball, but a nine-point defeat to Kentucky seemed to be more of a confidence booster than a confidence breaker for the Dores. They’d lose another close game that weekend, this time to the Florida Gators. Then, on Feb. 5, the Commodores won an SEC game.

As the final buzzer sounded, thousands were shocked by Vanderbilt’s upset defeat of the #18 ranked LSU Tigers. It seemed poetic: a team that was 0-8 in the SEC snuck by a team that was 8-0. The Vanderbilt offense, which hadn’t scored more than 64 points since Nesmith went down, dropped 99 against LSU. Leading the charge was junior guard Saben Lee, scoring 33 points and proving that when he wants a bucket, you’re not going to stop him from getting one. But the surprise of the night was junior Maxwell Evans. The 6’3 guard, who had spent his first two seasons as a reserve defensive specialist, found himself in a starting role nearly all season. But his 31 points shattered his previous career high, and he became the hero in Vanderbilt’s first SEC win since he was a freshman.

Since Vanderbilt and Kentucky last played, the Wildcats have gone 2-1. While they picked up wins against Mississippi State and Tennessee, they dropped a key match against the #18 ranked Auburn Tigers. Leading the charge for the Wildcats is freshman star Tyrese Maxey, who is averaging 13.4 PPG as he prepares for this year’s draft, where scouts and analysts believe he may be a lottery draft pick. Sophomore Ashton Hagans is also seen as a first-round pick this June, and star junior center Nick Richards has proven to be a threat, contributing 14.6 points, 8.3 rebounds and an incredible 2.1 blocks this season. Sophomore guard Immanuel Quickley has shown his ability to shoot the basketball all year, shooting 39.4% from deep and a stunning 92.0% from the line.

Meanwhile, Vanderbilt has learned that, while no one individual can replace Nesmith’s offensive output, improvements all around can lead the team to some key victories. Point guard Scotty Pippen Jr. has continued to grow, scoring double digits in 8 of the Commodores’ last 9 games. Jordan Wright, who Commodore fans have lauded for his defense all season, is beginning to put it together offensively, scoring a career high 11 points in each of his last two games.

So, going into their matchup against the Wildcats on Tuesday, the Commodores bring a lot of confidence. They’re one week removed from their upset win against LSU, and are entering this game with the same energy. For the Wildcats, this is absolutely a must-win game, as they look to break a 3-way tie for first place in the conference with LSU and Auburn, all of whom are 8-2 in the conference.

The Commodores have not won a game against Kentucky since 2016, but they have put up some solid efforts during the span. They lost by two points in overtime in 2018, and last season they lost just 56-47 to a Wildcats team that had current NBA rookies PJ Washington, Tyler Herro, and Keldon Johnson,all first-round draft selections. No matter what happens in Memorial Gymnasium, it’s going to be a competitive game. Buckle up for a fun one, folks.