Vanderbilt splits the Sunday doubleheader and improves to 6-3 on the season. 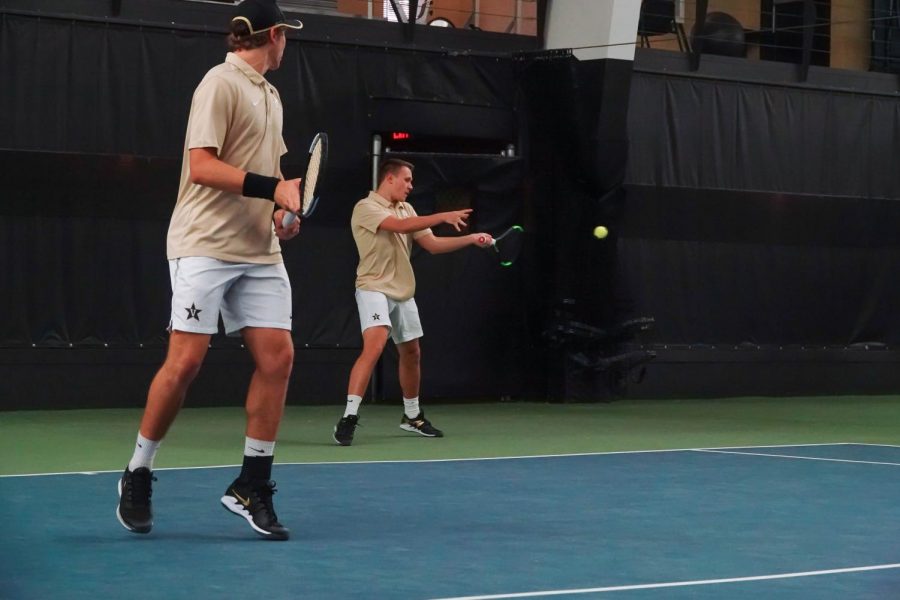 Vanderbilt Men’s Tennis (5-1) entered Sunday’s doubleheader at the Currey Tennis Center fresh off a three match win streak following its most recent victory over Memphis on Friday. In the first match of the afternoon, Vanderbilt faced the Ivy League’s Harvard Crimson (7-0) in a non-conference battle. The result did not favor the Commodores, as Harvard squeaked out a hard-won victory, 4-3. The Commodores would later respond emphatically in the second match, besting Tennessee State 7-0.

Vanderbilt got off to a hot start in the opening match against Harvard. They secured the doubles point thanks to strong opening sets from seniors Billy Rowe and Panu Virtanen at the first doubles position and sophomore Macsen Sisam and junior George Harwell at the second doubles position. After nabbing a 3-1 set lead, Rowe and Virtanen never looked back, winning the match in dominant fashion, six sets to one. Additionally, Sisam and Harwell overcame Harvard’s Harris Walker and Steven Sun six sets to four in a hard fought win. The Commodores were unable to sweep doubles play, however, as Vanderbilt’s Christiaan Worst and Max Freeman could not defeat Harvard’s Henry von der Schulenburg and Robert Wrzesinski, ultimately falling to the Crimson duo six sets to four.

Following doubles play, the Commodores had to come out victorious in three of the six singles matches to clinch the match overall. However, the Crimson had something to say about that, winning its needed four matches behind Schulenberg, Walker, Wrzesinski and Sun to come from behind and take the overall match.

In the first match of singles play, Macsen Sisam had trouble against Harvard’s Harris Walker in the fourth position, losing the match in straight sets 6-2, 6-1 as Harvard tied the match 1-1.  At line one, George Harwell gave Vanderbilt a 2-1 lead by making quick work of Harvard’s Rohan Jachuck, winning the match in two sets, 6-2,6-2. Harwell’s consistency was on full display as the victory gave the junior his ninth consecutive singles victory of the season.

At the second singles position, Billy Rowe won Vanderbilt’s crucial third singles point of the afternoon, defeating Harvard’s Brain Shi in three games. With their match tied one set a piece and Shi leading 4 games to 2 in the third set, the pair traded breaks, tying the match at four games all. After much back and forth, Rowe’s experience proved crucial as he was able to pull out the match tying victory in a thriller, winning the last set 7-6 and the match 6-4, 4-6, 7-6.

With the overall match tied at three and all the pressure on him, Vanderbilt sophomore Marcus Ferreira took the court against Steven Sun of Harvard in the sixth singles position. The match was intense, featuring multiple breaks in the last set by both players and passionate emotion shown on both sides. Ferreira waited for his opponent to make mistakes by hitting balls out or coming up short at the net, but it was not enough. In an absolutely classic match where both players looked like they had nothing left to give, Sun pulled out the decisive victory in the second tiebreak, clinching the overall match for Harvard, 4-3.

The loss snapped Vanderbilt’s three game win streak, bringing the Commodores to 5-2 on the season, while Harvard extended their unblemished record to 8-0.

The Commodores next faced Tennessee State in the second match of the doubleheader.

Doubles play was again strong as Vanderbilt swept all three matches with relative ease. Sisam and Harwell overpowered their opponents, dropping not a single game en route to a decisive victory. The Commodores only lost three games total, with Rowe and Virtanen dropping one game and Freeman and Worst dropping two.

Similar to the day’s earlier match, Vanderbilt found itself needing three wins in six matches to secure a victory. But the Commodores did not let this one slip away. They came out firing, winning the first four matches in straight sets and dropping no more than three games in any single match.

George Harwell continued his run of dominance at first singles, winning 6-3, 6-2 while Max Freeman secured the win that had eluded him all day, 6-0, 6-2. Panu Virtanen won 6-1, 6-0 and Christiaan Worst won 6-0, 6-0 at third and fourth singles respectively. At fifth singles, James Ignatowich provided another strong performance by winning 6-2, 7-6 to finish off the Commodore sweep.

Vanderbilt improves to 6-3 on the year after splitting Sunday’s matches and will travel to face Northwestern on Feb. 21st in the final match before conference play begins at LSU on Feb. 28.