Recent graduates produced a short film together while navigating life after Vanderbilt. 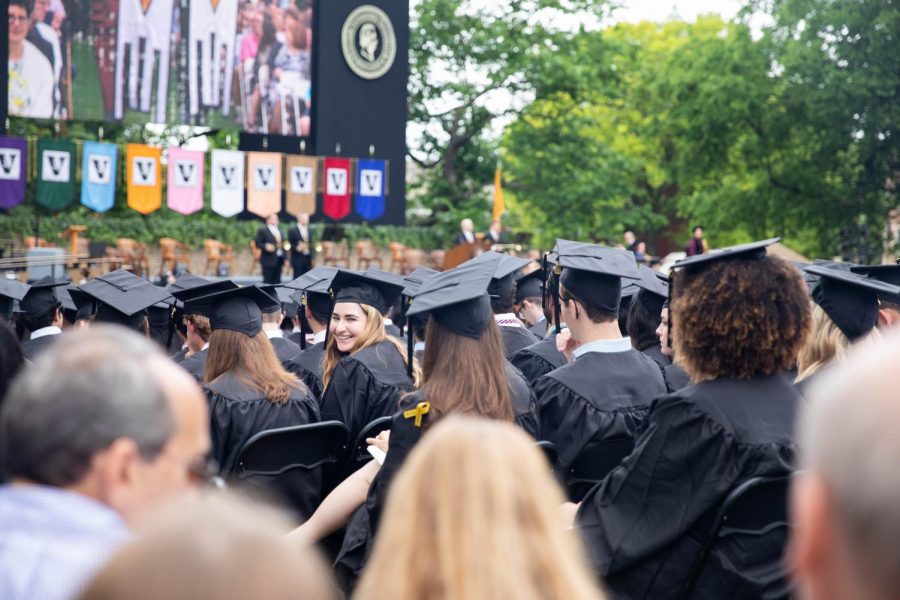 Students gather for commencement May 2019.

At Vanderbilt, it can sometimes feel like your academic career is a hectic blur of trying to do all the right things so that your professional career runs smoothly. When Katie Means, class of 2019, first set foot on campus, she had no idea what her academic career would entail. She pursued the well-worn HOD path with a focus in corporate strategy, in the hopes that it would pave her way to a solid career.

In little time, Means learned that the traditional route is not the be-all and end-all when it comes to your profession. She joined The Slant on a whim as a first-year and quickly discovered her passion for comedy writing. She became more involved in the club and ultimately served as editor-in-chief her senior year. Means decided she wanted to pursue a career in mRedia, although she knew she would face a very different recruiting process and career path than her friends.

“In media, you don’t always get a job lined up prior to graduating because there isn’t that recruiting cycle that consulting and finance have,” Means said. “If you are applying for a job in media, they want you to be ready to work. You can’t apply in February because they will expect you to work within two weeks.”

After graduating, Means packed her bags and headed to New York City to see what awaited her. She found a job working in the archives for MSNBC and NBC News and now works as a researcher there. However, she still finds time for her love of comedy through side passion projects like “The Gap,” a short horror-comedy film that premiered this January.

Written by Madeline Goetz, class of 2018, “The Gap” is a 20-minute film about a manager turned murderer who victimizes her employees because she’s convinced they’re leaking designs to competitor J.Crew. Goetz actually worked for The Gap and wrote the screenplay for a class while she was at Vanderbilt. She was then selected to read the script for an event hosted by the Cinema and Media Arts Department. Means, who had previously produced music videos with her friends, approached Goetz afterwards with the idea of turning the screenplay into a film.

“When I was at Vandy, I helped produce a bunch of music videos that my friend directed, so that was how I got experience working on small sets,” Means said.“Through the process of making this film however, I had to learn how to raise money, how to rent equipment, what kind of equipment is needed, finding locations and managing finances.”

The film premiered on Jan. 31, and Goetz and Means are now in the process of submitting “The Gap” to short film festivals. Most of the characters in the film were played by other Vandy graduates also living in New York.

“None of my closest friends are in the same city, but a huge amount of people move to New York after graduation, so there’s a nice network of people who are interested in similar things to me,” Means said.

Although having the New York network has benefitted Means, post-grad life is still an adjustment which can be extremely daunting at times. Finding her way in the media field and being far from her close college friends proved to be difficult, especially in the beginning.

“Graduating without a job ready was definitely kind of scary and demoralizing because a lot of my friends had plans. It continued those feelings of imposter syndrome that a lot of students have at Vanderbilt,” Means said.

Means reminds the seniors getting ready to receive their diplomas this spring that it’s okay to have mixed feelings about graduation. The adjustment period won’t always be easy. Fortunately, Means found a friend in Goetz and the two plan to continue their pursuit of working in comedy. Goetz currently works as a news researcher for the Late Night with Seth Meyers. Means hopes to follow her lead and go into comedy professionally sometime soon. After the film’s debut at film festivals this year, it will be made available on YouTube.