Chelsie Hall, Koi Love and Demi Washington combined for 48 points as the Commodores finally got back in the win column. 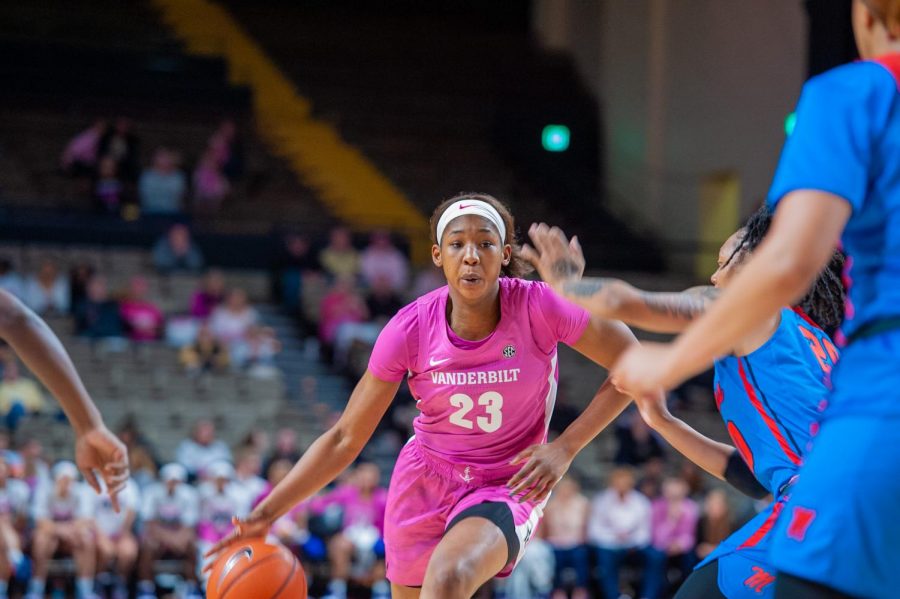 Koi Love (23) drives to the basket against Ole Miss.

In a game they led from start-to-finish, the Vanderbilt Commodores defeated the Ole Miss Rebels 63-47 on Sunday, Feb. 9.

With this win, the Commodores snapped a six game losing streak and improved to 13-10 on the season and 3-7 in conference play.

Although the offense got off to a slow start, guard Chelsie Hall, just a 28.6 percent shooter from deep on the year, knocked down two big three pointers to get the scoring started. But the story of the first quarter, and really the story of the game overall, was Vanderbilt’s swarming defense.

The Rebels struggled to get into any of their offensive sets thanks to constant perimeter pressure by Vanderbilt’s guards. Ole Miss finished the quarter shooting just 18.2 percent from the field with six turnovers, and Vanderbilt led 14-6.

“It was huge,” coach Stephanie White said of her team’s defensive intensity. “We wanted to get back to our defensive identity and make sure that we come out aggressively and make things difficult.”

The second quarter initially looked like it would be a continuation of the first and that the Commodores would run away with the game. They started the quarter on a 10-0 run aided by two mid-range jumpers from Hall, who finished the game with a game-high 21 points and pushed their lead to 24-6.

The Commodores held the Rebels scoreless in the quarter until the 2:52 mark, when guard Jayla Alexander made a jumper. Up until that point, the Rebels were consistently unable to get into their offense until late in the shot clock and were extremely frustrated by Vanderbilt’s constant on-ball pressure. Ole Miss, however, did not go away quietly, and the Rebels ended the half on a 7-0 run of their own, cutting the Commodore lead to 24-13.

The Rebels continued to ride their momentum from the first half into the third quarter, scoring on three of their first four possessions to cut Vanderbilt’s lead to 27-19, less than two minutes into the quarter. To make matters worse for the Commodores, forward Mariella Fasoula exited the game with an apparent left ankle injury, and Jordyn Cambridge headed to the bench with three fouls. Nothing was going right for Vanderbilt, and the Rebels were taking advantage of every miscue as they attempted to mount their comeback and win their first SEC game of the season.

However, as they have done for much of the SEC season, the Commodores relied on freshman forward Koi Love to get them going. Love made herself available in the middle of the Rebels zone and scored six consecutive points to push Vanderbilt back in front 33-20. Two more baseline jumpers by freshman guard Demi Washington put the Commodores up 17 points, and they never looked back from there.

“Chelsie [Hall] was awesome,” White said. “She’s been really solid for us the last few games and her energy is contagious. When you see plays like when she makes that and-one and she’s stepping underneath, everybody loves that for her. She’s kind of a quiet kid, but when she shows that emotion everyone feeds off of it. She was huge today for us.”

The Rebels got within 14 points a couple of times in the fourth quarter, but they could not put enough stops together to put any real pressure on the Commodores in the quarter. Vanderbilt ultimately triumphed 63-47.

“In practice this week, since we were on a bye week, we came in and we worked hard, and we have to do whatever it takes to get these wins, playing in the best conference: the SEC,” Hall said.

“It was really about just playing within ourselves,” Hall said of the team’s mentality. “We didn’t really focus on Ole Miss. We had to do what we do, starting with defense, playing with energy and with intensity and just focusing on hitting our shots.”