Commodores advance to 3-2 on the season behind wins from Drummy, Ross and Cruz. 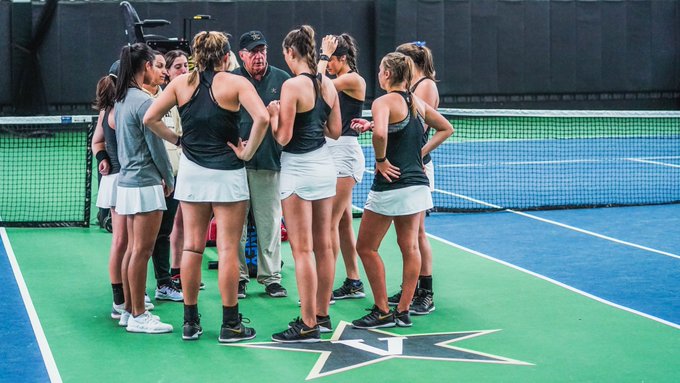 Head Coach Geoff Macdonald talks to his team ahead of their matchup with the Miami Hurricanes on Saturday. Photo courtesy Vanderbilt Athletics.

Following a tough loss against North Carolina, the Vanderbilt Women’s Tennis team made a big statement in non-conference play against the Miami Hurricanes, winning 4-1 on Saturday. The Commodores came out on top in both singles and doubles play behind strong performances from underclassmen Georgia Drummy, Anna Ross and Marcella Cruz.

Vanderbilt jumped ahead early, claiming the doubles point behind two strong sets from line one’s Christina Rosca and Drummy and line two’s Emma Kurtz and Ross. Kurtz and Ross quickly won their set 6-1 against Miami freshmen Selma Cadar and Nada Dimovska, controlling the court at the net the entire time. On the other side, Rosca and Drummy stayed even with Miami’s Daevenia Achong and Perez-Somarriba. The match appeared to be Miami’s after Achong and Estela Perez-Somarriba broke Rosca and Drummy’s serve late in the set, but Vanderbilt’s duo responded with a break of their own, winning their set 6-4 and securing the critical doubles point.

After doubles play, Vanderbilt sealed the match with singles points from Drummy, Ross and Cruz.

At line two, Drummy took the first singles point by defeating Miami’s Achong. Having faced Achong already in her doubles match, Drummy was able to target Achong’s weaknesses and emphasize her own strengths. Drummy quickly took the first set 6-2, playing patiently and often stretching the point out long enough for Achong to make an unforced error. In the second set, Achong fought back, keeping the game score even until 3-3, but Drummy broke free late in the second set, scoring three unanswered games to take the match 6-2, 6-3.

Ross, at four singles, was in a close match with Miami’s  Cadar throughout its entirety. Ross and Cadar both displayed strong serves, and they traded service games through the first set until the game score reached 6-6, and they entered a tiebreaker. Although the match had been relatively even, Ross dominated the resulting tiebreaker with powerful forehands and serves, winning the tiebreaker 7-2 and the set 7-6. In the second set, Ross broke Cadar’s serve early to go up 2-0, but Cadar continued to battle her closely and won her following service games. Ultimately, Ross’s early break proved to be critical to the set as she closed out the match 7-6, 6-4.

After losing in her doubles match, Vanderbilt’s Cruz triumphed in her line five singles match against Miami’s Maya Tahan. Tahan took an early lead in the first set, and she held that lead until she went up 5-3. In a pivotal moment, however, Cruz stormed back, tying the set at 5-5 and then surging to close out the set 7-5. Cruz carried her momentum into the second set, staying slightly ahead of Tahan through the entire set with consistent groundstrokes. She demonstrated remarkable persistence and determination in her crucial match, and her 7-5, 6-4 win clinched the overall match-up against Miami.

Although the match was called before she finished, Kurtz battled with Miami’s Florencia Urrutia in a demanding three-set match. After falling to an early 3-0 deficit in the first set, Kurtz rallied and won the first set 6-4. Then, Urrutia took an early lead in the second set. She held the lead and took the second set 6-3. Miami’s Urrutia appeared to be retaining her momentum in the third set, as she was leading 4-1 when the match was called. Freshman Dasha Kourkina looked dominant in her six singles match, but her match ultimately went unfinished, as Vanderbilt had already clinched the win. She was leading 6-1, 1-0 when play ceased.

With the win, Vanderbilt advances to 3-2 on the season. The Commodores will continue non-conference play on Sunday, Feb. 16 when they face the Ohio State Buckeyes at home.