More than two decades after she took the court in Memorial Gym for the Commodores, Lee spoke in the very same venue about her excitement to assume her new role. 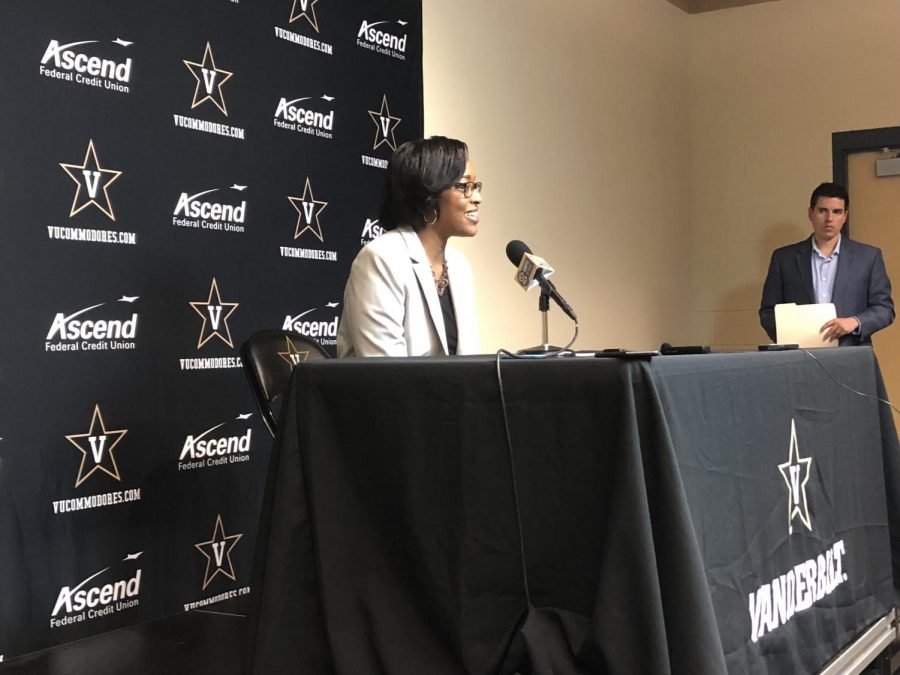 One hour before the Vanderbilt men’s basketball team took the court on Wednesday night, all eyes were focused on the podium. In the small media room that lies just downstairs from court level sat a small crowd. Among the crowd were the unmistakable faces of Vanderbilt Head Football Coach Derek Mason and former Vanderbilt basketball player Shan Foster.

When she walked through the door, all the murmuring stopped. When she sat at the podium, Foster, Mason and several others in their corner began to clap and cheer. And when she began to speak, silence once again ensued.

Candice Storey Lee addressed the media on Wednesday night for the first time since being named the university’s Interim Athletic Director. It was the culmination of nearly 20 years of hard work that saw the three-time Vanderbilt graduate assume the highest role in the school’s athletic office.

“I first just want to say that I’m excited for the opportunity to sit before you in this capacity,” Lee began. “I’ve always been, even as a child, attracted to the unique proposition of Vanderbilt, and this space where great academics and athletics can intersect and we can be successful in both areas. I loved it then, and I love it now.”

“I’ve heard from so many people,” Lee said. “I’m so humbled by how people have experienced this decision. It’s not lost on me responsibility that I have, so the people who look like me and those who don’t know that they can have opportunities to excel.”

While Turner was hired with no experience in a collegiate athletic office, Lee is quite the opposite. She has been a member of the Vanderbilt community since 1996. Lee was a captain and four-year letter winner for the Vanderbilt women’s basketball team, graduating in 2000 with a degree in human and organizational development. Two years later, she earned her master’s degree in counseling from Vanderbilt, and in 2012, she earned her doctorate at Vanderbilt in higher education administration.

To Lee, Vanderbilt is home. She’s spent more time as a part of this university than she has away from it. She has walked in the very shoes of the people that she is now called to serve.

“I’ve been at Vanderbilt for a long time, and I’m as excited today as I was more than two decades ago when I first arrived,” she said.

After earning her master’s in 2002, Lee began working for the Vanderbilt Athletic Department as a senior woman administrator. After 10 years in the role, she was named the senior associate athletic director in 2014 before being named deputy athletic director in 2016, serving under the late AD David Williams. Despite working closely with Williams for the better part of her career, Lee says that she will look to put her own unique stamp on the job.

“He absolutely remained steadfast and committed to the student-athlete experience,” Lee said of Williams. “I think that’s what that is the responsibility of all of us who are part of this endeavor for college athletics. I think that every leader stands on their own, and so again, this is going to happen to Candice, but I absolutely appreciate everything from David and everyone that supported me.”

Williams reportedly had aspirations for Lee to become Vanderbilt’s Athletic Director, and though Saturday will be the one-year anniversary of his passing, that wish is remembered by former student-athletes who have shown their support for Lee on social media, including All-Pro NFL cornerback Casey Heyward.

My last real talk with My Guy David Williams. He told me he wasn’t going to retire until @CandiceLee78 was in line to become the AD. Now he looking down smiling. Congrats @CandiceLee78 so happy for you and the program. #VU

Heyward wasn’t the only one to commend Lee on the promotion. Former Commodores Tommy Openshaw, Julian Terrell, Marqu’es Webb and Jordan Matthews all spoke positively of Lee, contending that she is the right person for the job. Lee is well-known and highly revered on Vanderbilt’s campus. Mason and Foster sitting up front to watch her initial press conference is proof of that.

Amazing news out of Vanderbilt today. I never had the chance to meet MT, however I am 100% in support of @CandiceLee78 she’s a great person, leader, community figure, and simply helped me throughout my college career. So excited for her and her family.

Getting caught up on AD stuff.

I will say that when @BangTimeBurks and I wrote the @vuhustlersports article last year, @CandiceLee78 was the first and only person from administration to reach out and meet with us to discuss what we brought up. Vandy Athletics is in good hands.

Let me articulate what I’m saying: from the time I met Candice, I was 17, it was clear that student athletes were her main priority! Despite any and everything else, the well being and best interest of SA’s has ALWAYS been her priority. So excited for @VandyAD ⚓️⬇️

Now, Lee will embark on bringing Vanderbilt out of a rumored spending deficit with a “strategic plan” of her own, continuing to build on her work with Turner prior to his resignation.

“We all have been working very diligently on our strategic plan, and that plan has been very comprehensive,” Lee said. “We’re going to be fiscally responsible. That’s a value of our department and our university, but we’re going to pursue the revenue opportunities.”

“It’s going to highlight priorities for the next four to five years, and we’ll make decisions based on those priorities,” Lee said. “That would be a first step. It’s not an end-all, be-all. It’s a first step, and that’s coming very soon.”

Currently, Lee’s role exists in an interim capacity. Interim Chancellor and Provost Susan Wente did not comment on how long Lee will serve in this role, and Chancellor Daniel Diermeier is set to take over on July 1. Lee said she has heard from Diermeier but that no conversation has taken place regarding whether her interim status has a path to a full-time role.

“That’s a conversation that perhaps is for another time,” Lee said.

For now, Lee has a lot on her plate, with an entire university—Foster and Mason included—ready to watch her turn in the spotlight.