In a whirlwind week dominated by the resignation of Athletic Director Malcolm Turner, Jerry Stackhouse and the Vanderbilt Commodores reignited Athletics with a dramatic 99-90 victory. 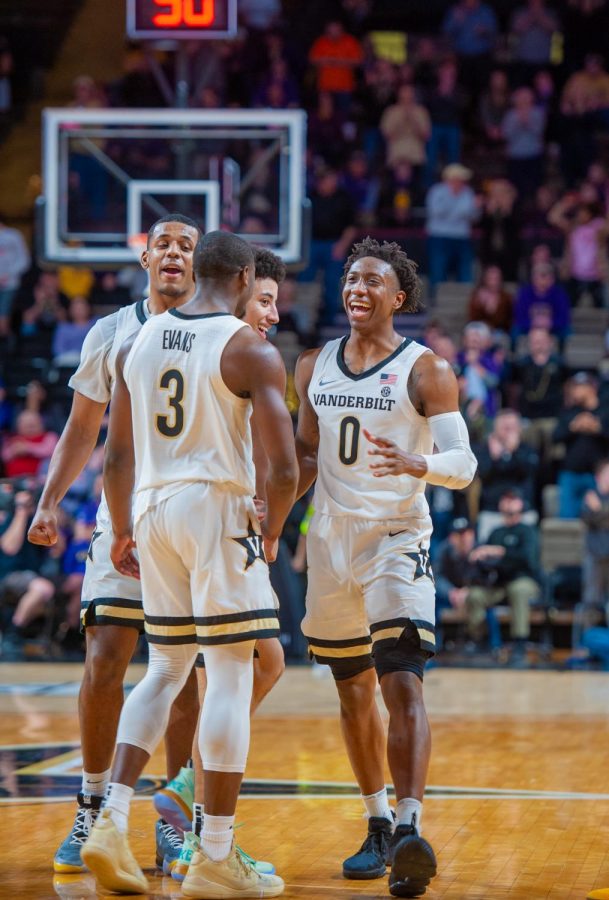 Desperate for a win.

That was the only way to describe the Vanderbilt men’s basketball team on Wednesday. In a week filled with drama much larger than his locker room, Head Coach Jerry Stackhouse found himself and his team at a crossroads. A day before tipoff, Athletic Director Malcolm Turner resigned. The man and friend whom Stackhouse followed to Vanderbilt was now gone. Rumors swirled about whether he even wanted to remain at Vanderbilt without Turner, and fans speculated about his possible exit.

But Stackhouse had other things to worry about. His team’s SEC losing streak had reached an abysmal 26 games, and he was desperate to give this fanbase hope. No. 18 LSU came into Memorial on a tear, winners of eight straight conference games, and few could have predicted the way the matchup transpired.

But on a rainy night in Nashville, in front of 9,256 fans, a group of young men demonstrated their faith in their head coach, pulled an upset for the ages and kept the ever-dwindling fire of Vanderbilt Athletics alive another day.

It is not often that a team that has gone 704 days without winning a league contest goes out and creates a buzz in a stadium that has not had buzz for what seems like an eternity. Stackhouse created that buzz. He kept his players on board and kept their heads high.

Righting the ship is not easy; just ask Bryce Drew. But Stackhouse did it with sound X’s and O’s and a commitment to his players. It’s no secret that he lost two of his best players, Aaron Nesmith and Clevon Brown, to injuries earlier this season. Through the injuries, though, he has relied on the principles he believes in: strong offensive sets and the importance of fight.

It is easy to forget the misses. This team has missed a lot of shots this season, and many of those misses have come at the end of artistic sequences of screens and passes courtesy of Stackhouse’s clipboard. From the team’s first possession of the season that featured a Clevon Brown three to a gutsy dagger from his young point guard Scotty Pippen Jr. on Wednesday night, Stackhouse has put his players in the best possible position to win.

He wants to play a trendy form of basketball that centers around three pointers and free throws and has remained committed to urging his players to shoot threes. Last night was no exception. Finally, some of those threes fell. Combined with a gameplan centered around exploiting LSU’s superior size and athleticism, the Commodores were able to pull off the upset.

Stackhouse found ways to feed the hot hand, his junior guard Maxwell Evans, in the first half, and he ran one set in particular that he has used many times for different players. The set features a double elevator screen yielding a wing three pointer, and last night he ran it for Evans, who buried the three to put the Commodores up eight deep in the first half. Stackhouse continues to put his players in the best positions to win. And that is a coach’s job.

But what should be even more impressive to fans is Stackhouse’s ability to motivate and foster a culture that does not quit. Frequently this season, he has insisted that his team play the game a certain way, with a certain poise and blue-collar mindset.

“You see our guys, our guys aren’t hanging their heads. They come to work everyday and bring that same hard hat mentality that they played with tonight,” he said after the game. “We told them if they continue to do that, things will turn”

He has shown fans that he is not scared to play walk-ons. Walk-ons play hard. They scrap for every minute of the spotlight that they can possibly get, and that’s the type of culture Jerry Stackhouse wants to employ. Guards Jon Jossell, Braelee Albert, and Isaiah Rice, all walk-ons, played minutes against LSU and will likely never forget their time on the court Wednesday night.

“Everybody has to be ready to step in and do their job when they are called upon and that’s the beauty of this thing,” Stackhouse said. “These guys really feel like they were a part of a big win that hasn’t happened in a long time. We are a team.”

Despite solid contributions from the walk-ons, Wednesday night was all about the juniors. In an effort unmatched by many Commodores before him, Saben Lee dominated this game in every facet. He started the season as the team’s sixth man but after injuries, has finally solidified his place in Stackhouse’s starting lineup. And fans should not expect that to change. Lee played 39 of 40 minutes and turned in a career high 33 points while looking like all the best parts of an NBA guard. Whether it was with massive posterizing dunks or simply getting his team into position, Lee played like a true veteran and like someone who did not want to have an 0-36 conference losing streak associated with his name.

Along with Lee, Evans had easily his best performance in the black and gold. Despite being a role player the past two years, Evans has flourished under Stackhouse. Stackhouse has given him the green light, not only to shoot three pointers, but also to absolutely dig in on opposing team’s best guards. And against LSU, Evans was exceptional. He scored a career high 31 points, including seven three pointers. 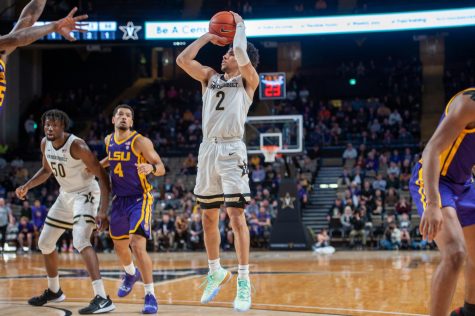 While the upperclassmen led the way, the freshmen did their part as well. Freshman guard Jordan Wright took over late in the second half, getting to the bucket and the free throw line at will. And of course, Pippen Jr. threw the final punch, a James Harden-esque step back three that finally made it all too real.

The general aggressiveness from his entire team across the board on Wednesday night was truly inspiring. Pippen Jr., Lee, Wright and others played downhill and were never afraid to attack the basket. That confidence to take on larger defenders is instilled by a head coach. Stackhouse has faith in his players, and he will continue to have faith in his players whether they have lost 26 SEC games in a row or are deep in the midst of an NCAA Tournament run someday.

He has now given Vanderbilt fans everywhere a sliver of hope in a time they desperately needed it. Two years of injuries, turnover, rumors and heartbreak culminated in a deafening Memorial Gymnasium on Wednesday night, and Jerry Stackhouse was left soaking wet in Gatorade at the podium, a smiling man who is hungry for more.

“This is not the end all for us,” he said. “This is not all we want to accomplish, to win one game in the SEC. Glad that we did. Now we got that monkey off our back and now y’all can write something else.”