Following the Senior Bowl this past Saturday, Vanderbilt Football’s star trio of Jared Pinkney, Kalija Lipscomb and Ke’Shawn Vaughn are one step closer to realizing their NFL dreams. 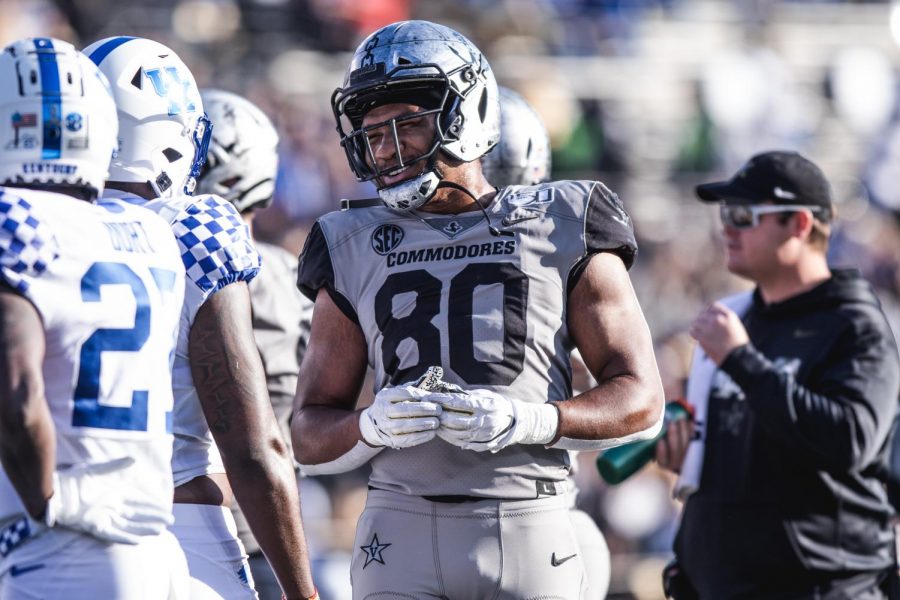 This upcoming Sunday, the Kansas City Chiefs take on the San Francisco 49ers in Super Bowl LIV, the culmination of an eventful 2019-20 NFL season. However, for the remaining 30 teams who won’t find themselves in Miami this weekend, the offseason has already begun. The first major event of this offseason happened this past Saturday, as the annual Reese’s Senior Bowl took place in Mobile, Alabama.

The Senior Bowl, a showcase for college football’s best senior draft prospects, is an important first step on the road to the NFL Draft. The game, and to a greater extent the week of practice leading up to it, has helped countless players improve their draft stock throughout the years. Additionally, Senior Bowl MVPs include the likes Dak Prescott, Phillip Rivers and LaDanian Tomlinson. Participating in this event is a huge deal for any prospect hoping to improve their chances of achieving their dream of being drafted by an NFL team.

Jared Pinkney came into the Senior Bowl trying to prove that this past season was not representative of the quality of player that he is. After a junior season in which he had 774 receiving yards and seven touchdowns, Pinkney’s stats plummeted his senior year. He only managed to achieve 233 receiving yards and two touchdowns, not reaching the end zone until the penultimate week of the season.

However, Pinkney’s struggles on the field cannot entirely be pinned to him alone.. Pinkney was never able to develop any chemistry with any of the quarterbacks that lined up under center. As such, his draft stock remained largely unaffected by his drop off, as he has still been widely regarded as a second or third round prospect, as well as one of the very best tight ends available. Yet, there were still plenty of doubters following this past season, so Pinkney spent his week in Mobile trying to prove them wrong.

Although Pinkney didn’t end up playing in the actual Senior Bowl game, he was very productive throughout the week of practices. Pinkney came into the Senior Bowl weighing 254 pounds, showing that he has the strength and size to play tight end in the NFL. Additionally, Pinkney showed plenty of flashes of his immense potential during drills, in which he made several impressive plays. In fact, Pinkney was so impressive to those in attendance at practice that he was named Tight End of the Week for the South team.

Kalija Lipscomb also had a nice week of practices, largely benefitting from the improved quarterback play that he encountered throughout the week. Lipscomb made several highlight reel catches on deep balls from the likes of Jalen Hurts and Justin Herbert during his one-on-one drills. Additionally, he was the one Vanderbilt player to actually play in this year’s Senior Bowl, in which he caught two passes for 21 yards.

Lipscomb’s draft stock is somewhat more in question than that of his two fellow Commodores. Coming into the week of the Senior Bowl, Kalija Lipscomb was largely seen as late round draft pick or a guy that could slip out of the draft altogether. In an NFL Draft that might have one of the best groups of wide receivers in recent memory, Lipscomb often gets lost in the shuffle. However, with his exemplary week in Mobile, Lipscomb may very well have grabbed the attention of several teams in need of young, dependable wide receiver.

Ke’Shawn Vaughn, the last Commodore to be invited to the Senior Bowl, is most known for his countless explosive plays out of the backfield. However, his week in Mobile ended up being rather quiet, as he was not a full participant in all practices. After participating in initial practices, an undisclosed injury kept Vaughn out of all remaining practices and the game last Saturday.

Although Vaughn was not able to do much on the field to improve his stock in front of scouts, he probably didn’t need to in the end. Already viewed as one of the more explosive backs in this draft class, Vaughn benefited tremendously from the recent news that both Najee Harris and Travis Etienne were returning to school. Widely regarded as a third or fourth round draft pick, an uneventful Senior Bowl shouldn’t have too much of an effect on his draft status.