The Commodores dominated the Penn Quakers en route to capturing their first dual match victory of the season. 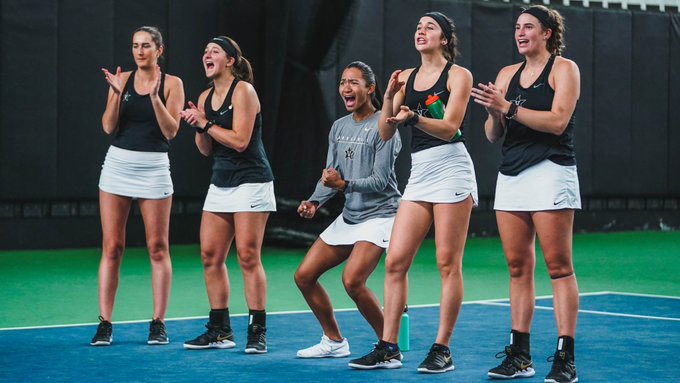 Vanderbilt rolled through its three singles matches, winning each one in straight sets.

On Friday, Jan. 24, the Commodores defeated the Penn Quakers 4-0 in their first dual match of the season. The match was part of the ITA Kickoff Weekend hosted by Vanderbilt, which also featured a match between the Arizona State Sun Devils and the Northwestern Wildcats.

In front of a larger audience than usual, the Commodores were able to secure the match with consistency in both  serving and net play. In both singles and doubles, Vanderbilt capitalized on unforced errors to push past the Quakers.

Vanderbilt struck first, securing the doubles point with sets from one doubles team Georgia Drummy and Christina Rosca and from three doubles team Dasha Kourkina and Amanda Meyer. Drummy and Rosca got off the court quickly, winning their set 6-2. After Penn won at two doubles, Kourkina and Meyer battled closely with Penn’s Gibson Thomas and Ashley Zhu at three doubles and ultimately triumphed 7-5 after multiple lengthy cross-court rallies near the end of the set. Kourkina and Meyer capitalized on unforced errors with consistent volleys, overhead slams and backcourt shots.

During Rosca’s singles match against Zhu, she gave up two games early in the first set. However, after breaking Zhu’s serve, Rosca collected game after game in a dominating streak to ultimately win 6-2, 6-0. The veteran Rosca’s backcourt consistency gradually built momentum that Zhu was not able to match.

At three singles, Kurtz’s powerful serve and net play quickly put her up 3-0 in the first set. Her shot placement and positioning caused Marija Curnic to make several unforced errors that propelled Kurtz through the first set. In the second set, despite giving up two games, Kurtz clearly remained in control and closed out her match 6-0, 6-2.

Similarly, Ross commanded the fourth singles line, winning her match 6-1, 6-2 to clinch the overall match against Penn 4-0. Although a first-year, Ross appeared experienced and composed as she downed Penn’s Sonita Tartakovsky in straight sets.

Georgia Drummy at line one and Amanda Meyer at line five had not finished their matches when the overall match was called due to the Commodores’ 4-0 sweep. Despite each facing an early deficit, Drummy and Meyer were both in the midst of a comeback when play ceased. Dasha Kourkina did not begin her match at line six.

With their sweep of the Quakers, the Vanderbilt Women’s Tennis team achieved their first dual match victory of the season behind strong performances from both veterans and newcomers. The ninth-ranked Commodores will advance and compete in the ITA Kickoff Weekend Championship match at home against Arizona State on Saturday, Jan. 25.