Koi Love led the Commodores with 19 points and nine rebounds. 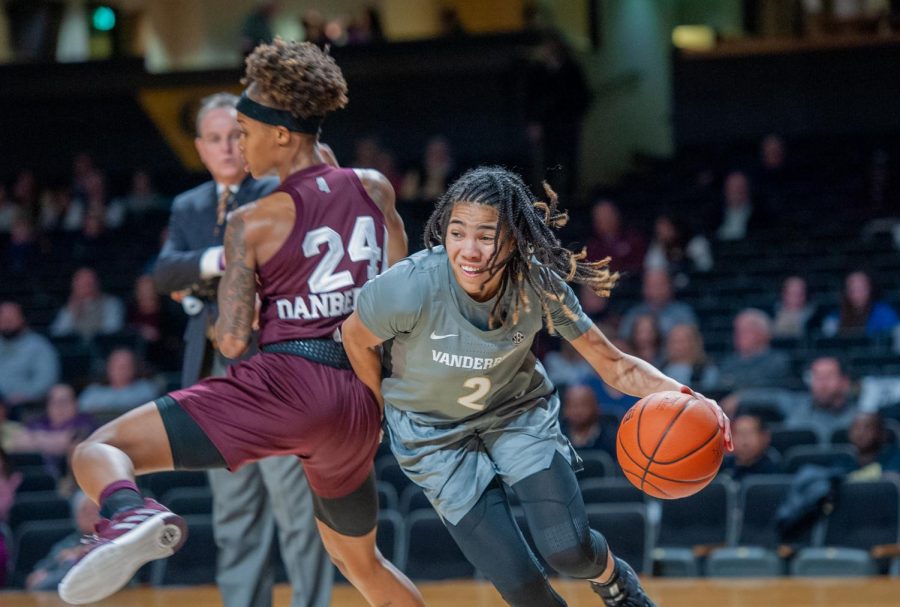 After Vanderbilt’s consecutive blowout losses against ranked SEC opponents, it seemed likely that the team was about to be handed another one against No. 9 Mississippi State.

Yet, the Commodores played gritty all game, and, shockingly enough, Vanderbilt went into the fourth quarter with a four point lead and all the momentum in Memorial Gym. Unfortunately, the Bulldogs flaunted their experience and poise in a lopsided fourth quarter to win the game and shatter Vanderbilt’s hopes of an upset.

Despite the final score being 68-52, this game should be looked at optimistically, as the Commodores exceeded expectations against championship level talent.

With that being said, here are three takeaways from Vanderbilt’s loss against Mississippi State:

“Even though we didn’t win, we came out, and we played hard,” forward Koi Love said. “This was our bounce-back game. The last couple games we got blown out, and we didn’t give our best effort. But coming out here tonight, everyone on the team was giving their best effort. Going into the next couple stretches of games and towards the end of SEC play, we need all of that. That team has to show up every night.”

It may seem unfitting to call a 16 point loss a bounce-back game, but this was a fair sentiment shared by the Commodores heading out of the contest. Despite the loss, Vanderbilt was able to find a strong rhythm on both ends of the floor and truly gave it their best effort. In the third quarter, the Commodores seemed to have all the Memorial Magic with a pair of momentum-swinging threes from freshman guard Kiara Pearl. The freshman nonchalantly knocked down both threes, unfazed by the contesting defenders in her face. The “best effort” that Love mentioned clearly showed, as the Commodores hustled to pick up 18 offensive rebounds that allowed for 11 second-chance points.

While the offense was graceful, Vanderbilt fought hard on the defensive end as well. Despite letting the Bulldogs shoot 73 percent from the field in the first quarter, the Commodores were energetic and bounced back, holding them to only seven points in the second quarter. Overall, the Commodores looked extremely hungry for a win in a match-up in which many had written them off before the game even tipped.

Right off the bat, Vanderbilt looked set to suffer another blowout at the hands of a strong conference opponent. The Commodores suffered from a couple early turnovers and even struggled to inbound the ball against the strong press used by the Bulldogs. These worries, however, seemed to go away once the offense found a rhythm in the second quarter.

Unfortunately, these issues came back to bite when it mattered the most. The Commodores struggled with ball security in the fourth quarter with the game on the line. Vanderbilt turned the ball over 26 times in the contest, with Mississippi State taking advantage and posting 31 points off these turnovers. In the last seven minutes of the game, the Commodores turned it over seven times, which lead to a 16-0 Mississippi State run to finish the game.

Ultimately, the fourth quarter turnovers proved to be extremely costly and took all the momentum away from the team, as the Bulldogs outscored Vanderbilt 22-2 in the final quarter. Most of the turnovers were a direct result of the Bulldogs surprise switch to zone defense, which Vanderbilt was clearly not expecting to face.

“Typically when you’re preparing for Mississippi State, you’re preparing for their pressure and their man-to-man, so we didn’t focus a lot of attention on zone offense,” coach Stephanie White said. “They threw us off guard with that. Our guards didn’t keep our same aggressiveness to the rim, and we didn’t keep the same pace that we were running things even though we run a lot of the same things. We just got stagnant. We got stagnant, and we turned it over.”

Since the Commodores went into this game as large underdogs, the expectations were not that high for Stephanie White’s squad against the Bulldogs. However, when Vanderbilt exceeded these expectations throughout the first three quarters, they looked like a well-oiled machine poised for an upset.

When Mississippi State decided to surprise Coach White with zone defense, however, the Vanderbilt offense was extremely caught off guard. Unable to score, Vanderbilt found themselves prey to Mississippi State’s championship-caliber talent. This seemed to intimidate the Commodores who no longer played with the same confidence that they did in the previous quarters. Rather, they appeared to merely hang on as they watched their lead disappear.

“We played not to lose instead of playing to win, and then they got on a roll,” White said. “They did what a top ten team should do in the fourth quarter.”

The Commodores’ change in mindset after the Bulldogs’ hot start in the fourth quarter ultimately cost them the game. The offense no longer looked as graceful as it did in the first three quarters, and the team could not get any good looks. For the rest of the season, Vanderbilt must stay locked in throughout the entire game and play fearlessly, regardless of who the opponent is.