After leading by four heading at the end of the third quarter, Vanderbilt was outscored 22-2 in the fourth as the Bulldogs switched to a zone defense. 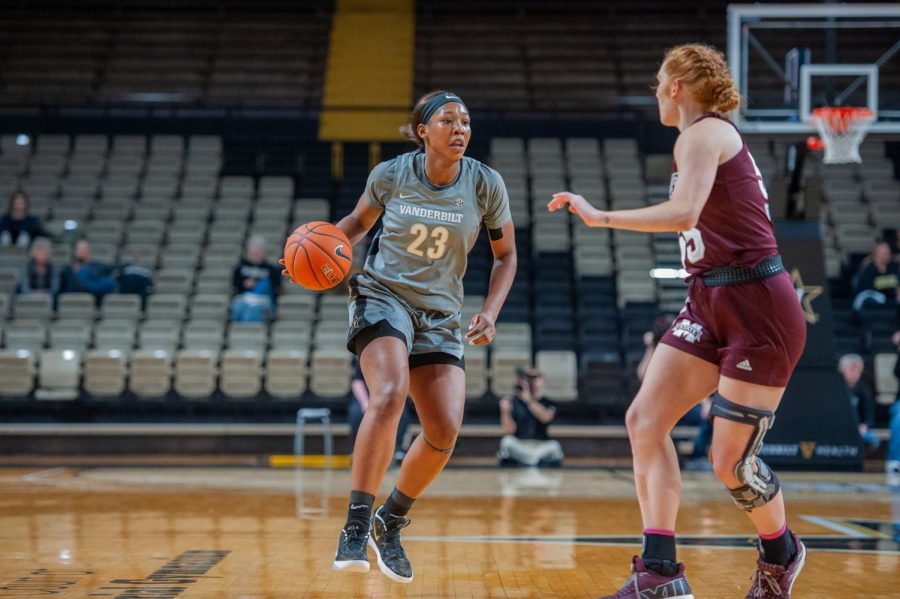 Losers of two consecutive games to ranked opponents by a combined 80 points, Vanderbilt’s match-up against the ninth-ranked Mississippi State Bulldogs figured to be another daunting challenge for an out-matched Vanderbilt squad.

In contrast to the previous games, however, the Commodores gave the Bulldogs absolutely everything they could handle before eventually falling 68-52 in the end.

“I’m just really proud of our group,” coach Stephanie White said. “For thirty minutes we executed our gameplan, both offensively and defensively, really well against one of the best teams in the country. We grew tonight; I think we got better tonight. We’ve got to continue to learn what it takes to compete night in and night out in this league, and I think we took some steps forward today.”

The two teams traded baskets early as freshman forward Koi Love led the charge for Vanderbilt with five quick points. Mississippi State’s lead was only one with 5:57 left in the quarter. The Commodores, however, went scoreless on their next four possessions, and the Bulldogs dominated inside, stretching their lead to 16-9.

Mississippi State continued to pound the ball inside against Vanderbilt’s match-up zone, as front-court mates Jessika Carter and Rickea Jackson combined for 16 points in the first quarter. The Bulldogs finished the quarter shooting an absurd 73 percent from the field, converting on 11 of their 15 attempts, most of which were right around the rim.

Heading into the second quarter down 24-14, it appeared that the Commodores were headed for another blowout loss against a ranked opponent. Instead, Chelsie Hall and Mariella Fasoula opened the quarter with back-to-back buckets to cut the lead to six. The Bulldogs responded and pushed their lead to eleven with 5:25 remaining in the half.

The remainder of the second quarter, however, belonged to Vanderbilt. The Commodores went on a 9-0 run, and a three-point play in transition by Love brought them within a single point at the 2:31 mark.

After shooting 73 percent in the first quarter, the Bulldogs shot a measly 3-16 from the field in the second and finished with just seven points. Mississippi State’s offense looked completely out of sorts once Carter, who led the Bulldogs with 10 first quarter points, picked up her second foul with 7:41 left in the half and watched the remainder of the half from the bench. Vanderbilt went into the locker room at half trailing just 31-30.

Less than a minute into the second half, Love picked up her third foul and immediately headed to the bench. The Bulldogs pushed their lead to five, but guard Jordyn Cambridge responded with a baseline jumper, and LeaLea Carter added a free throw. Two possessions later, Love checked back into the game and promptly buried a three-pointer, giving the Commodores their first lead of the game since the 7:25 mark in the first quarter.

Love scored six more points in the third quarter, and Kiara Pearl, a freshman guard, hit two momentum-swinging three-pointers. On the other side, Carter continued to dominate inside for the Bulldogs, scoring nine points in the quarter. By the end of the third, the Commodores had stretched their lead to 50-46, and Memorial Gym was alive with energy, the fans sensing the potential for perhaps the biggest upset in program history.

The Bulldogs scored four consecutive points to open the fourth quarter and tied the game at 50 apiece, forcing White to call a timeout. Forward Aliyah Matharu made a lay-up for the Bulldogs out of the timeout, but Pearl responded with a jumper to tie the game again with 6:38 remaining.

From that point on, it was all Mississippi State. The Bulldogs finished the game on a 16-0 run while Vanderbilt went scoreless for the remainder of the game. The Commodores turned it over seven times in that span, as the Bulldogs’ surprise switch to zone defense threw the team out of their offensive rhythm.

“Typically when you’re preparing for Mississippi State, you’re preparing for their pressure and their man-to-man, so we didn’t focus a lot of attention on zone offense,” White said. “They threw us off guard with that. Our guards didn’t keep our same aggressiveness to the rim, and we didn’t keep the same pace that we were running things even though we run a lot of the same things. We just got stagnant. We got stagnant, and we turned it over. We played not to lose instead of playing to win, and then they got on a roll. They did what a top ten team should do in the fourth quarter.”

Ultimately, the Bulldogs championship pedigree and experience, in addition to their size advantage inside, proved to be too much to overcome for the Commodores, who fell 68-52.

“Even though we didn’t win, we came out, and we played hard,” Love said. “This was our bounce-back game. The last couple games we got blown out, and we didn’t give our best effort. But coming out here tonight, everyone on the team was giving their best effort. Going into the next couple stretches of games and towards the end of SEC play, we need all of that. That team has to show up every night.”