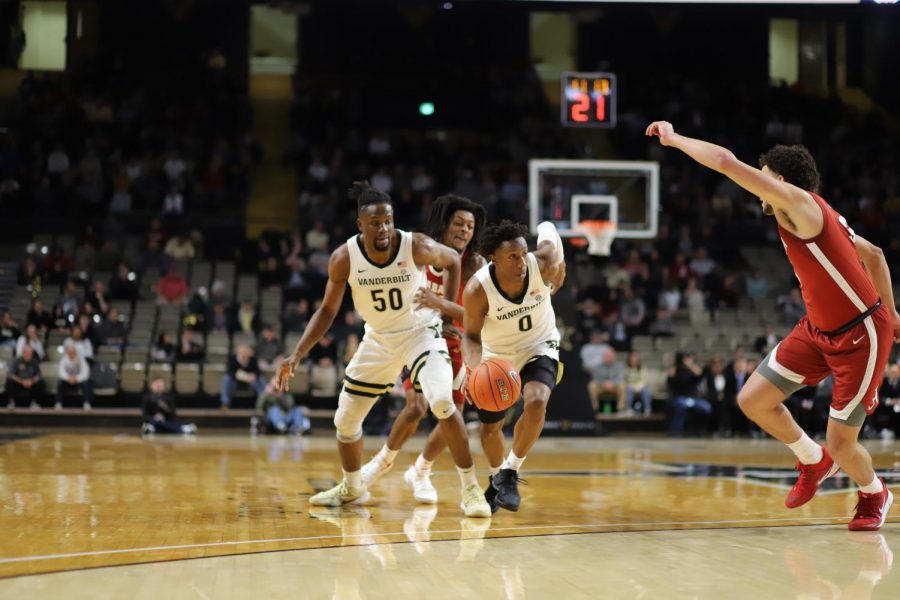 Four days after Vanderbilt failed to make a three-pointer for the first time in 1,080 games, Commodore Head Coach Jerry Stackhouse implored fans to focus not on the end of the three-point streak, but rather on the potential end of a then 24-game losing skid.

“I encourage everyone to support our team as we work to break an SEC losing streak and continue to build the foundation for our program,” Stackhouse tweeted before tipoff.

Unfortunately for the Commodores, that streak did continue, as a 77-62 loss to the Alabama Crimson Tide pushed the mark to 25 consecutive conference losses dating back to the end of the 2018 season.

A difficult night from the three-point line and a lopsided rebounding battle (51-32) plagued Vanderbilt, who couldn’t capitalize on 25 Alabama turnovers. After an early second-half run gave Alabama an 18-point lead, the Crimson Tide would never look back.

“We did a lot of good things again on the defensive end forcing that many turnovers, but we’ve got to try to convert at a little better clip,” Stackhouse said. “There’s not too many games that we’re gonna win in this league where we shoot 30 percent.”

The Tide, who have been bolstered this season by a backcourt of Kira Lewis Jr. and John Petty, continued to go to the well on Wednesday night. Their top two scorers combined for 39 points and 17 rebounds in the victory.

Vanderbilt got a 18-point effort from Saben Lee, who knocked down 11 of his 12 free throw attempts. Dylan Disu added a career-high 23 points in defeat.

“I told [Disu], I don’t want to see him turn down any shots,” Stackhouse said. “He’s a really good shooter and he’s a good player. I think his game is going to expand as he’s here longer.”

The first half belonged to Petty. The conference’s active leader in three-point percentage (47.5) proved exactly why he holds that distinction early and often, knocking down five threes to help a Crimson Tide offense that started out hot. Lewis Jr. and freshman guard Jaden Shackelford each hit their first shots of the game, and Saben Lee answered with a layup of his own.

After Jordan Wright picked Petty’s pocket for a layup, Petty answered on the other end with a three-pointer from the left wing. Dylan Disu took Vanderbilt into the first media timeout with an old-fashioned three-point play. It would take a little while for Vanderbilt to hit a three from beyond the arc, though. The Commodores missed their first eight shots of the ballgame.

Meanwhile, Petty did quite the opposite. The 6’5″ junior continued to let it fly from deep, finding himself open and nailing two straight threes to extend the Alabama lead.

The Commodore defense in the backcourt kept them in the game, however. Wright stole the ball from Petty again and took it to the basket for a layup, and minutes later found Lee off a steal for an easy dunk. Petty continued to answer though, draining his fourth three of the half.

Finally, the Commodores got a three of their own to fall after 37 consecutive misses spanning three games. Scotty Pippen Jr., who came off the bench for his first time in a Vanderbilt uniform, drained a three from the wing to start a new three-point streak for Vanderbilt. After yet another steal and score from Wright, Pippen Jr. connected on his second three, this time off an assist from Disu, who checked back into the game after injuring his left ankle earlier in the half.

The 6’9″ forward then spotted up himself, sinking a three-pointer to cut the Alabama lead to just two. A corner three from Shackelford brought the score to 37-31 Alabama at halftime, still well within striking distance for the Commodores.

But just as a one-point deficit turned into a rout against Tennessee, so too did Vanderbilt’s six-point halftime deficit.

Alabama came out of the locker room on fire, leaning heavily on freshman guard Lewis Jr. and senior guard James “Beetle” Bolden. Lewis corralled a long rebound, drilled a three-pointer from the top of the key and then found a nifty feed from Bolden for two more on the break. Two consecutive threes from Bolden capped off a 13-0 run. What was once a four-point lead for Alabama became an 18-point margin in a matter of just 2:34.

Vanderbilt continued to battle back with 13 minutes to play, but the game was no longer in the balance. Four points from Lee were quickly answered with four from Shackelford, and the Commodores went nearly nine minutes without hitting a field goal before Lee finally broke the drought with a driving layup.

Three blocks and a put-back dunk from Matt Moyer allowed Vanderbilt to hang around late in the game before Shackelford sealed the deal from the free-throw line with 37 seconds.

The Commodores will look to bounce back this Saturday when they travel to South Carolina to take on the Gamecocks.