Monáe and Salaam sit down with The Hustler for an exclusive interview about criminal justice system reform, the impact of their projects and pop culture. 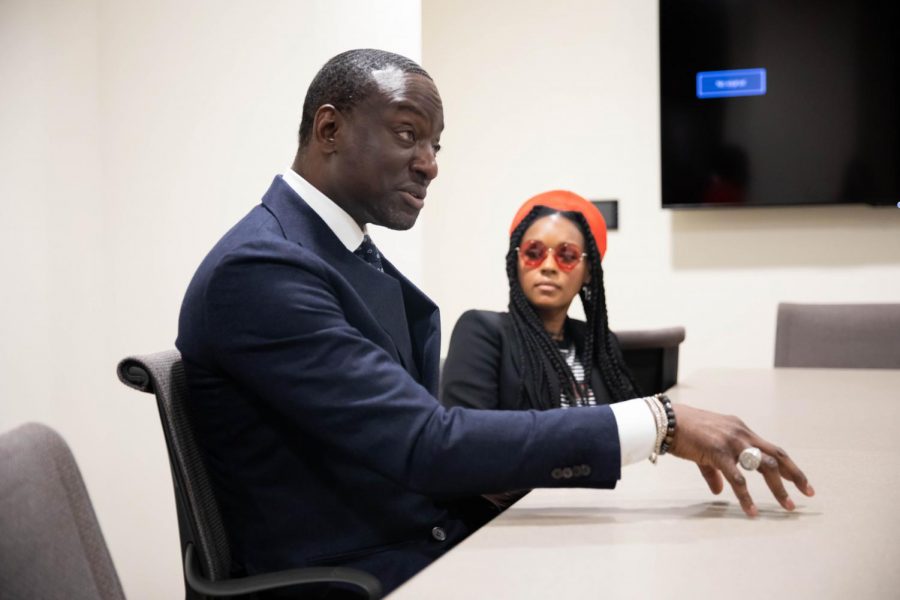 Janelle Monáe and Yusef Salaam came to campus Jan. 19 to discuss the power of storytelling at the keynote event of Vanderbilt’s Martin Luther King Jr. Commemorative Series, hosted in conjunction with the Chancellor’s Lecture Series. On stage at Langford Auditorium, Monáe and Salaam participated in a discussion moderated by Emilie Townes, Dean of Vanderbilt’s Divinity School.

Monáe is an artist, actress, activist and model. She has six Grammy nominations, three BET nominations, several Billboard Top 100 hits and has been in well-known movies like “Hidden Figures,” “Rio 2,” “Moonlight” and “Lady and the Tramp.” She has her own record label, Wondaland, and uses her platform to make social commentary, such as in the song ‘Hell You Talmbout,’ which demands that people say the names of black men killed during acts of police brutality., She also founded the organization Fem the Future to help women get involved in the music industry.

Salaam is one of ‘The Exonerated Five,’ formerly known as the ‘Central Park Five,’ who was wrongfully convicted of rape and attack of a jogger in Central Park in 1989 at the age of 15. Salaam was incarcerated for nearly seven years for this crime before he was exonerated in 2002 along with the other four men. In 2016, President Obama presented Salaam with a Lifetime Achievement Award. Today, Salaam is a speaker, activist, poet and recipient of a 2014 Honorary Doctorate of humanities from Anointed by God Ministries Alliance & Seminary.

Vanderbilt Hustler (VH): So, “When They See Us” sheds light on a lot of horrors of the criminal justice system—in the courtroom and out of the courtroom, and in prison and out of prison. Of all of the obstacles that people who have been incarcerated face, what weighs heaviest on your heart? Or, what was hardest for you? Where do we start in trying to fix our broken criminal justice system?

Yusef Salaam (YS): The most challenging thing coming home from prison was that we were seen as adults that we didn’t have any kind of tool kit that allowed us to be emancipated. We knew that, but yet we also wanted to be able to be free enough so that we could take care of ourselves. 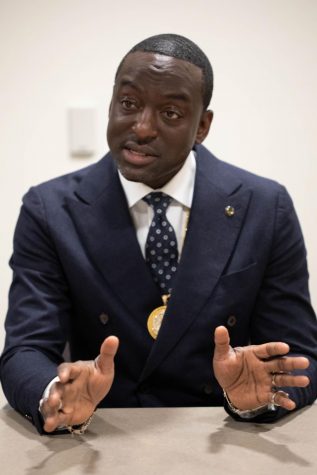 Emily GonçalvesYusef Salaam has become engaged in activism within the criminal justice sphere since his exoneration in 2002.

When you look at Part III [of When They See Us] I believe it is, Raymond Santana got re-arrested, I found out just like the rest of the world. He was living in a house where his stepmom believed he was guilty, which is one of the most challenging things, because as you can imagine, your home is supposed to be the safest place. You’re supposed to be like the door is locked, I’m home, I can go to sleep and wake up and know that you’ll be safe still, and yet he was going through that tremendous trial.

For me, I didn’t have the same kind of trial, but being in a position where I was, trying to claw my way back to normal was the first challenge. I kind of played with the story, one of the things I tell people especially now is that I used to live in a penthouse—we just didn’t have an elevator. Six flight walk-up. So imagine leaving home and having to take groceries up and down the stairs, or go to do laundry, or what if you’re going to work and you forgot something valuable like your job ID. Now you gotta go back up the stairs. I lived in that reality for a very long time mainly because I couldn’t afford anything else. I definitely live a way better life now.

My children, those of them who are young enough, will never even know what that life is like. That was one of the biggest challenges for me, just to get back to normal. I came home, and I was a tourist in my own city. I was looking at everything, but I was also very afraid because I felt like the carpet was going to be pulled from underneath my feet again. I was walking around on eggshells, living and moving around, hiding in plain sight.

Janelle Monáe (JM): I tweeted in support of non-binary day. I think that it is important to educate people on non-binary, and on the people in the non-binary and gender queer communities. I have lived my life, if it has not been clear enough, as someone who has fought against gender norms. I feel my feminine. I feel my masculine. I feel everything in between, and I am still on my journey of self-discovery. I am open to everything that I am.

VH: Dr. Salaam, where do you think as a country we can start to repair some of the damage we’ve done and start making a more equitable criminal justice system? Re-entry programs, parole reform, sentencing reform—if you had one policy passion that you could implement, what would it be?

Freedom, justice, equality, life, liberty and the pursuit of happiness—that’s all anybody wants. But when you tell people to go pursue it, now you become a threat. So it’s a lot to figure out where you start. If you give a person financial restitution, for instance, but you haven’t educated that person in this new real financial on how to live in this new financial reality, you do a great damage.

I look at my life, and we were fighting since late 2002, early 2003—that’s when they found we didn’t do this crime. It took another 12 years for us to win, in that time it took a bunch stumbling forward, a whole bunch of mistakes made, a whole bunch of travesty.

The beginning point is education. Proper education. I’ve heard before, if you teach a person to fish, they will have food all their life, but if you give a person a fish, they’ll just have a meal for the day. 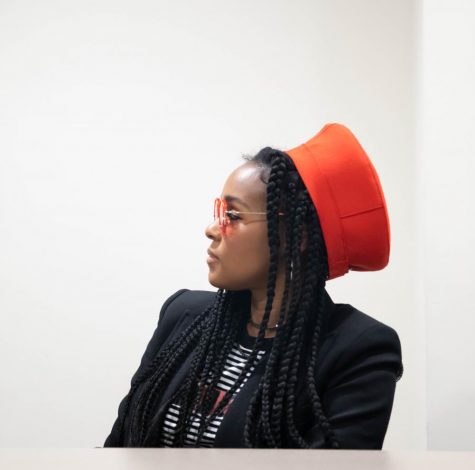 Emily GonçalvesJanelle Monáe is known for her unique, boundary-breaking fashion.

VH: Ms. Monáe, you’ve done a variety of creative projects throughout your career as an artist and an actress. How do you decide what projects to take on?

JM: It depends on my schedule. I’m of the mind of not doing everything, but picking the right projects. I love growing, and I love projects that challenge me. So if it’s on the acting side, I try to take on roles that I feel like I can grow from. Also, if I’m able to work with one of my favorite directors or a cast that I’m a fan of, I want to be part of that. If there’s a story that I feel like really needs to be highlighted, I want to lend my support.

And I like having fun too. So if I feel like this will be something fun for me to do, because we don’t know how much time we have. I would love to spend the majority of my days not feeling like I’m working, but I’m having fun and I’m learning and I am doing it with people that I really like. I don’t want to work with people I don’t like, because nobody wants to do that [Laughs].

VH: A quick follow-up on that, I saw Hidden Figures during my junior or senior year of high school, and I really liked it. What drew you to that movie?

JM: They were hidden figures. I didn’t know about the women who helped get our first astronaut into orbit, into space, John Glenn. These women were black women, American heroes. It was because of their math and their brains and their perseverance that America made that achievement. I wanted the rest of the world to know that they existed and hopefully encourage other young black girls to get in STEM, to stay in STEM, to know that you can change the world and do something even greater with your mind, you can take it to the next level.

YS: She encouraged my children. I have seven daughters.

JM: You are so blessed.

YS: I am so blessed. And I’ll tell you, they have figurines, I think that was a catapult for them because society is telling women in particular ‘Stay over there. We’ll do it. We men will do it.’ Your portrayal in that film and in others told me, and I think it told everyone else—how many other stories have been hidden? And why? Right? Once we allow folks to really let people live in that vibrant truth, it’s shared. It’s shared in such a way that we all rise up.

Looking around the room, but I don’t really want to talk about anything racial per se, but I remember when gentrification was happening in Harlem. Folks, we always knew. Like I used to work at New York Presbyterian Hospital, but on the Weill Cornell Campus in New York City. I knew that I would be able to get a seat after 96th Street. It was like, without fail, I’m going to be able to sit down after 96th Street. Then all of a sudden, gentrification started happening, and folks were still on the train, it’s like wait, what’s going on? 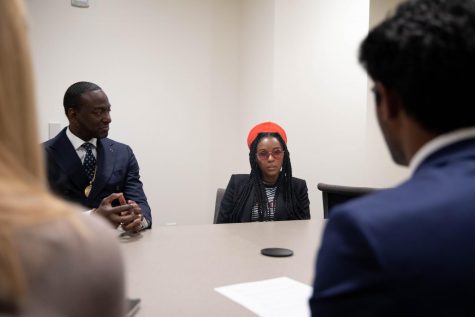 Emily GonçalvesYusef Salaam told Janelle Monáe that she encouraged his children, including seven daughters, with her work.

It’s not that we are just pushovers. It’s like, you could knock on our door and ask for a cup of sugar and guess what, you’ll get a cup of sugar. That’s just the type of people we are. And I think that kind of beauty is always suppressed because when you tell a people, you are important, you’re special, you begin to allow them to, in the psychosocial dynamic, contribute to society in a very powerful and meaningful way. But when you keep telling people they’re not worth nothing they begin to move throughout their life as if they were a mistake.

VH: You’ve both been involved in the creation of entertainment that told untold stories, meant to educate the viewer. How effective do you think aspects of popular culture are at changing hearts and minds on important issues? How has your work been received?

YS: I think it’s been everything. As a people, if we are in the class of life, we have been skipping grades. So, I have ten children, and one of the things that I realized is that my first child learned at this pace, my second child learned from my first child, and as they were learning, they were learning at a faster pace. My son, who is the last of the bunch, he’s like a king. He already knows, he just moves and he’s like, ‘I got it.’ You can’t help him to do anything because he’s going to figure it out, and then he’s going to say ‘high five’ afterward.

I think popular culture is so powerful in that it takes everything that’s already been laid down and it’s like, wow, if this is what this means, then this is going to lead to this.