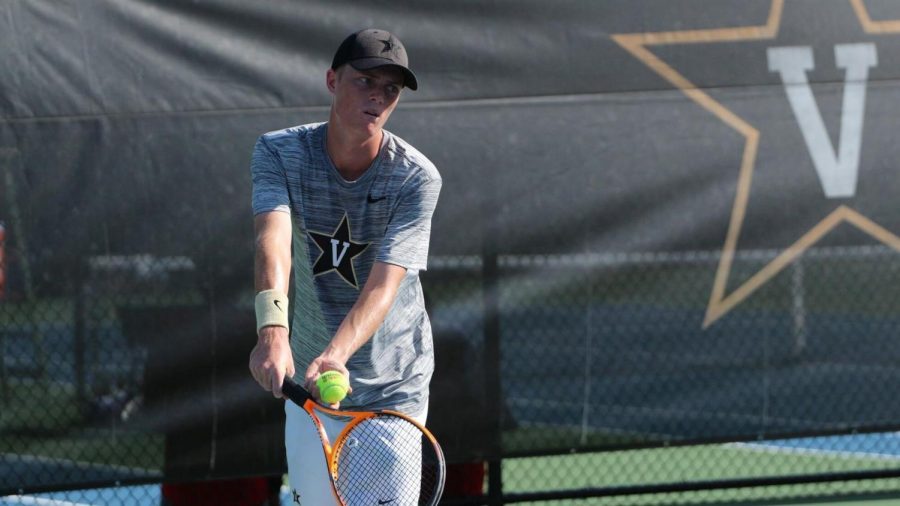 Marcus Ferreira gets ready to serve in his 6-2, 6-3 victory over Belmont's Arthur Toledo. Photo Credit VUCommodores.

After starting the season with a 5-2 win over the Nebraska Huskers, the Vanderbilt Mens’ Tennis team finished their season-opening double-header on Saturday with another 5-2 victory over the Belmont Bruins.

The early-season matchup with in-state rival Belmont began with doubles play. On the first doubles court, Vanderbilt seniors Billy Rowe and Panu Virtanen started out strong against Belmont’s Hendrick Inno and Marko Ilic. Rowe and Virtanen’s chemistry and consistency allowed them to steadily gain the upper hand against Belmont and win their match 6-2.

However, in the second doubles match, Belmont’s Felix Rauch and Taisei Miyamoto were in control of the court for nearly the entire match. They quickly went up 5-0 against Vanderbilt’s George Harwell and Max Freeman. Freeman and Harwell managed to make a late rally for a game, but Rauch and Miyamoto quickly closed out the match 6-1 with dominance at the net and their baseline speed.

The third doubles match, on the other hand, was a much tighter matchup. Vanderbilt’s Marcus Ferreira and Christiaan Worst traded blows with Belmont’s Vincent Sterkens and Grant Kelly throughout their set. Late in the match, Ferreira and Worst broke Belmont’s serve, propelling them to a 6-4 victory.

Winning the doubles point seemed to invigorate Vanderbilt’s singles players, as Harwell at first singles, Rowe at second singles, and Ferreira at fourth singles all roared to early leads.

On the first singles court, Billy Rowe faced Belmont’s Felix Rauch for the second time on Saturday after losing his doubles set to Rauch and Miyamoto 6-1. After securing the first set, Harwell battled Rauch more closely in the second set, but ultimately pulled away to win the match 6-3.

After clinching the doubles point against Belmont with his partner Christiaan Worst, Marcus Ferreira commanded the court in his singles match against Belmont freshman Arthur Toledo. His powerful serves and consistent overhead shots led him to a 6-2 victory in the first set. In the second set, however, Toledo broke Ferreira in the first game and held serve to gain an early 2-0 lead. Ferreira did not give up, and with persistence, he broke Toledo multiple times and surged to a 6-2, 6-3 victory.

Vanderbilt finished with a 5-2 overall victory against Belmont and ended Saturday with two wins under their belt. Next, the Commodores will play in the ITA Kick-Off Weekend on January 25th and 26th, and then they begin non-conference play against Middle Tennessee.