A crowd of 12,693 witnessed the first game in 34 years in which the Commodores failed to make a three-point shot. 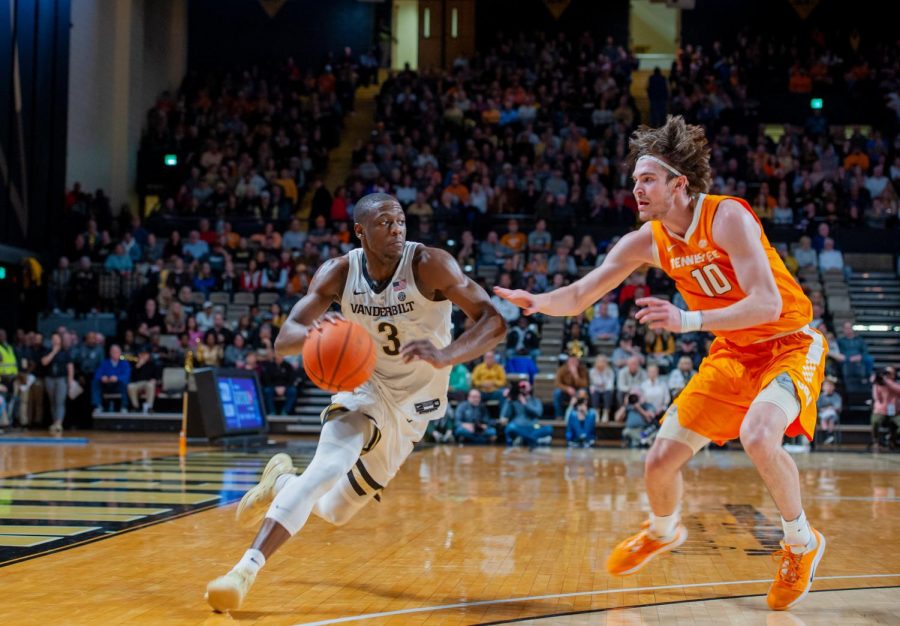 Saturday night in Memorial Gym saw the end of a long and storied streak for the Vanderbilt Commodores. It also saw the continuation of a separate streak the Commodores seem desperate to break.

Vanderbilt shot 0-25 from beyond the arc against a long and aggressive Tennessee defense, and when Saben Lee’s three-ball clanked off the front rim at the buzzer, the Commodore faithful let out one last cry.

“For whatever reason ,we stepped into our shots with a lack of confidence, and then you could just sense the pressure from the guys,” Head Coach Jerry Stackhouse added. “Every shot they took, especially once we got down to the end of the game and hadn’t made a three, the fans were more concerned about the threes than us really even getting baskets. It happens, and I felt for those kids because they were out there playing and trying to compete, trying to do things the right way, and it just didn’t work out for them.”

Saturday night also wrote yet another chapter in Vanderbilt’s now 24-game losing streak in conference play. What looked at halftime like a perfect opportunity to break the streak in front of the home crowd against in-state rival Tennessee quickly turned into a second-half rout. Vanderbilt’s last SEC win came back in 2018, when the Commodores defeated Ole Miss on the road in the last game of the regular season.

Now, nearly two years later, the Commodores played out the final minutes as a formality in the blowout, the latest in a string of tough losses.

“It just wasn’t meant to be,” Stackhouse said. “The real streak that we want to end is the losing streak. We want to get a win for these guys, and we’re going to continue to work. We’ve got to figure it out from within.”

Right from the opening tip, this was a hard-fought, defensive showdown between the two bitter rivals. Vanderbilt came out in a man-to-man defense, a stark contrast from the zone that it had predominantly played over the course of the past few games.

Early on, the man defense was effective. The Commodores forced three turnovers in the first two and a half minutes, turning over Tennessee point guard Santiago Vescovi twice on traps. Vanderbilt finally broke the scoring when Maxwell Evans finished through contact on a fast break layup.

Jordan Bowden answered for the Volunteers on a long two, and a baseline jumper from forward Yves Pons gave Tennessee the early 4-2 lead. Tennessee went cold for the next few minutes, however, as Vanderbilt forward Dylan Disu swatted away two potential opportunities at the rim, igniting the home crowd in the process. After an alley-oop from Evans to Disu and a second-chance lay-in from center Ejike Obinna, the two teams headed into the under-12 media timeout knotted at nine apiece.

The Commodores struggled mightily getting shots to fall for the remainder of the half though, partially because of the low-post play from Pons and his front-court mate, John Fulkerson. Fulkerson spun baseline to finish in the post for two points on the offensive end and then swatted a Matthew Moyer layup attempt on the defensive end in quick succession. Vanderbilt continued to fight back, though, thanks to some hero-ball from its point guard late in the first half. Scotty Pippen Jr. threw down a dunk off a steal before drawing a charge on defense and sinking a pull-up jumper over Tennessee forward Jalen Johnson to cut into the lead.

Lee cut into the lead even further, hitting a fast-break layup to go along with two free throws, the first of which gave him 1,000 points for his career. After a forced turnover and a long three that was just off at the buzzer, the Commodores found themselves down just one going into the break. They were still well within striking distance despite going just 6-27 from the field and 0-10 from three.

The lid stayed on the basket out of the locker room for Stackhouse’s team, but it popped off for Rick Barnes’s, who wasted no time increasing the lead.

“We came out and we had a couple of turnovers back to back, and they got run-outs,” Stackhouse said. “Instead of them having to face our half court defense again, they got a couple run-outs, got some easy baskets, and whenever you see the ball go through the hole, they got some confidence.”

Tennessee opened the second half on an 8-0 run, as the Volunteers got out on the break early and often. Bowden converted on consecutive layups, and Pons threw down a two-handed jam to bring the orange shirts off their feet, forcing Stackhouse to call a quick timeout. That didn’t stop the Tennessee offense, though. Even after Pippen Jr.’s and-one stopped the run, Pons and Fulkerson threw down two more dunks to extend the lead to 37-23.

With 12:34 left in the ball game, Vescovi drained a three for the Volunteers, the first triple of the night for either side, and the rout was on from there. Tennessee opened up a 20-point lead with ten minutes to go in the half.

The Commodores got a couple late buckets from Lee and Pippen Jr., who finished with 14 and 16 points respectively, but the lead had become insurmountable. A late dunk from Tennessee forward Olivier Nkamhoua sealed the deal.

Vanderbilt continued to let the threes fly in the final minutes to no avail, and Lee’s last ditch effort fell just short as the final buzzer sounded. After the game, Stackhouse spoke about putting the losses in perspective.

“I won 18 games as a rookie in the NBA after going to the Final Four,” he said. “I won at every level, and all of a sudden I get to the NBA, and I ended up playing with 30-something players that year. It was like a revolving door of players coming in and out, but I was foolish enough to think that we were supposed to be winning.”

“This is tough. Like I said, the streak for us as we see it is the games that we lost in conference this year. We’re trying to find our first win in the conference.”

The Commodores will look to bounce back and end their losing streak when they take on Alabama at home on Wednesday night.