In Search of Memorial Magic: A look back at the recent history of Vanderbilt-Tennessee

As the 10-6 Tennessee Volunteers come into Memorial Gymnasium Saturday, it might be a good time to examine several notable games between the two bitter rivals. 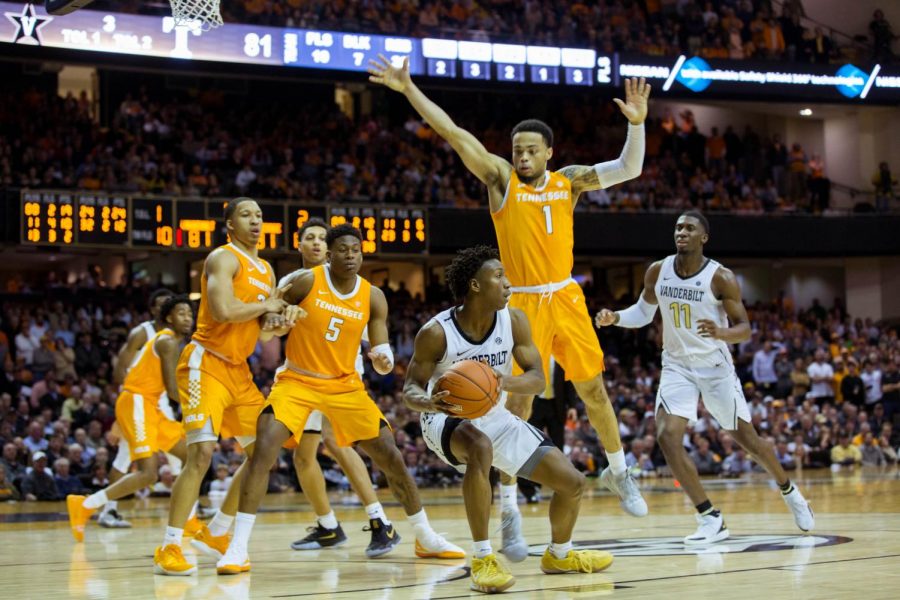 It’s been nearly two years since Vanderbilt has won an SEC basketball game. With each game, the winless streak continues into unprecedented territory, but for Commodore Nation, all of that ceases to exist for one night: Tennessee night.

That’s the thing about rivalry games. Even with Vanderbilt’s historic struggles in conference play, all is forgiven if Coach Jerry Stackhouse’s bunch knock off Tennessee Saturday night.

The Volunteers enter this SEC matchup at 10-6, coming off a blowout loss to the Georgia Bulldogs. Additionally, the team recently lost star point guard Lamonte Turner for the season due to a shoulder injury. Put simply, this Tennessee team is a far cry from the team that was ranked #1 in the nation the last time it came to Nashville.

The Commodores, who struggled mightily in the two games after Aaron Nesmith suffered a potentially season-ending stress fracture, is still looking for its first SEC win since 2018. However, if the offense is unable to get anything going, which has been the case several times this season, Saturday’s rivalry matchup could end up being a rather forgettable game.

That being said, there are plenty of games between Vanderbilt and Tennessee that have been pretty remarkable, for one reason or another. From overtime matchups to big time performances, this rivalry series has usually been anything but boring. So, with that being said, let’s take a look back at several noteworthy installments of the Vanderbilt-Tennessee rivalry.

Vanderbilt came into this game hoping to pull off one of the biggest upsets of the entire college basketball season. Tennessee, led by reigning SEC Player of the Year Grant Williams, had just been named the No. 1 team in the nation following an impressive 16-1 start to the season. By this point, Vanderbilt’s season had already been derailed following Darius Garland’s torn meniscus. On paper, this was a game that should have easily been a blowout. Instead, what followed was one of the best basketball games in the long history of this series.

The two teams went back and forth all night, with Vanderbilt getting especially strong performances from Nesmith and sophomore guard Saben Lee. With only 1:22 left in regulation, the Commodores held onto a 76-70 lead and a season defining victory well within reach, Vanderbilt forward Clevon Brown was called for a flagrant foul on Grant Williams, resulting in a four point swing that cut Vanderbilt’s lead to two. The Commodores were never able to fully recover from the call, one that was heavily scrutinized by the Commodore faithful. Tennessee forced overtime before pulling away and winning 88-83. As poorly as Vanderbilt’s season went last season, this game stands above the rest as a gigantic missed opportunity.

It’s been nearly three years since the last time the Vanderbilt basketball team has defeated Tennessee, when the Commodores travelled to Knoxville and emerged victorious. In what would be Bryce Drew’s lone win over Tennessee in his short run as head coach, a strong team effort was enough to win the game. Five different Commodores scored in double digits, led by Jeff Roberson’s 15. Additionally, Vanderbilt played smothering defense, as Tennessee failed to crack 30 percent shooting from the field.

Outside of the context of the rivalry, this game also held significant meaning to Vanderbilt’s season at large. The win pushed its record to 15-13 and served as part of a season ending 6-2 run that catapulted the Commodores into the NCAA Tournament. Despite a disappointing NCAA Tournament matchup that will live in infamy for Matthew Fisher-Davis’s late intentional foul, the significance of Vanderbilt’s win over Tennessee cannot be diminished.

To find the last time that Vanderbilt beat Tennessee in Memorial Gymnasium, one would have to go all the way back to March 1, 2015. For reference, 1,783 days have passed since then, Vanderbilt has had three different head coaches in this span and the No. 1 song on the Billboard Hot 100 was “Uptown Funk”. Needless to say, the world has changed tremendously since the last time that Vanderbilt could take out Tennessee in front of its home crowd.

In what would be long time head coach Kevin Stallings’s final win over Tennessee in the regular season, he took on the Volunteers’ new head coach, Rick Barnes. Barnes, who replaced previous head coach (and part-time professional wrestler) Donnie Tyndall, had no answer for one of the most talented teams in recent Vanderbilt history.

Former Commodores Damian Jones, Wade Baldwin IV and co. jumped out to a 43-24 lead at halftime and never looked back. In the end, four different Commodores scored in double digits and Vanderbilt locked up its first regular season sweep of Tennessee since the 2009-10 season. Even though the Commodores never lived up to their preseason ranking of No. 18, eventually losing an NCAA tournament play-in game against Wichita State, this dominant effort against Tennessee was a shining example of the potential that the 2015 squad possessed.