New Faces, New Places: Which players are coming to West End and which are jumping ship?

The offseason is officially in season for Vanderbilt Football. 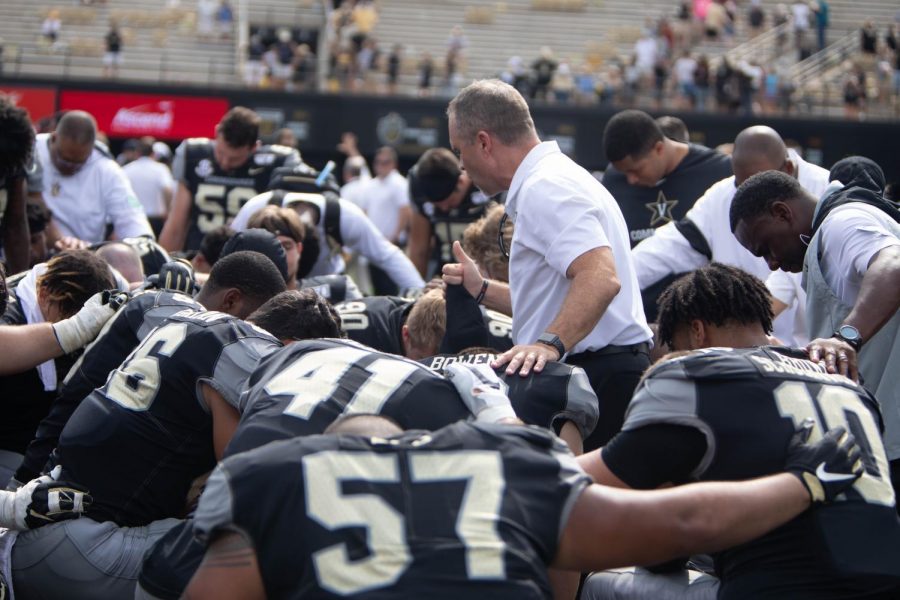 Vanderbilt prepares for a home matchup with Northern Illinois in 2019.

With every college football offseason comes certain things we know to be true: the start of a new year, the eventual turning of the leaves and a group of recruits and transfers descending upon Nashville. Following a disappointing 3-9 season that featured loses to UNLV and rival Tennessee among others, Vanderbilt looks to rebound in what will be Head Coach Derek Mason’s seventh year at the helm.

He will look to improve an offense that struggled to find a rhythm and a defense that failed to perform up to expectations. As a result, some players have left the program, and others have joined during the Early Signing Period for the 2020 recruiting class.
On the way in:
Vanderbilt football welcomed 15 new members in the 2020 recruiting class on Dec. 18, 2019. Following the graduation of several key seniors, including running back Ke’Shawn Vaughn, wide receiver Kalija Lipscomb and tight end Jared Pinkney, the program looked to retool at these and other crucial positions.

The class focused heavily on the quarterback position and the offensive line. These two position areas made up almost half of the incoming group, with the Commodores signing three signal-callers and four offensive linemen. The class features one four-star and 14 three-star recruits, including three-star quarterback Ken Seals from Weatherford, Texas and four-star linebacker De’Rickey Wright from Gadsden, Alabama.

As a whole, the group comes in ranked 52nd nationally and 12th in the SEC, according to 247sports. That figure represents a two spot improvement in the SEC rankings from the 2019 class and a five spot improvement overall. Vanderbilt hopes this new group of Commodores will help to bring prosperity back to the program.

Here’s a deeper look into some of the recruits from the new class:

De’Rickey Wright joins the Vanderbilt class as its only four-star recruit after flipping his commitment from Ole Miss on the eve of signing day following former Ole Miss head coach Matt Luke’s firing. He had originally committed to play for Nick Saban and the Crimson Tide at Alabama in March before switching to Ole Miss this past June.

A multi-sport athlete in high school, Wright profiles at 6’4”, 220 lbs. and is a big pickup for a Vanderbilt defense that ranked 101st in total defense in 2019. Wright will most likely play outside linebacker in Head Coach Derek Mason’s 3-4 scheme, which should be a good fit if he can gain a few pounds.

Ken Seals joins the Commodores as the quarterback of the future for this program. Standing 6’3” and weighing 191 lbs., Seals comes in as the second-ranked pro-style quarterback out of the state of Texas. He had a storied high school career, and was the 2019 MVP at the Overtime QB Challenge, Hall of Fame Invitational Showcase, Lone Star Showcase and All-American Combine. He was also a four year captain of Team USA and an Under Armour All-American Invitee.

Seals will enroll early at Vanderbilt and be at spring camp. He chose the Commodores over offers from Minnesota, Boston College, and Cincinnati among others and will most likely compete with fellow transfer Michael Wright and redshirt junior quarterback Deuce Wallace for a starting role this coming season.

Kevo Wesley looks to provide a boost to a Vanderbilt offensive line that gave up 28 sacks this past season. Listed at 6’3”, 280 lbs, Welsey will help in pass protection while honing his run protection skills. He will likely need to gain weight in order to fend off hungry SEC pass rushers but has demonstrated an ability to learn quickly, as he only  picked up football in high school.

Michael Wright comes to West End as the 26th ranked dual-threat quarterback in the nation after flipping his commitment from UCF on signing day. Wright also turned down offers from Boston College, Northwestern and Arkansas to sign with UCF originally. At 6’4” and 185 lbs, he sports a thin frame and will likely need to change that in order to combat SEC defenders should he earn the starting job, but certainly brings a unique element to the Commodores’ quarterback competition.

The name of the game for Wright is speed, and he’ll bring a level of mobility to the quarterback position that Vanderbilt hasn’t seen in a long time. If he does not earn the starting job over Ken Seals or Deuce Wallace, Derek Mason and new offensive coordinator Todd Fitch could use him creatively in designed run packages and wildcat situations to change the pace of the offense.

On the way out:
Of course, the Commodores saw several stars, including Pinkney, Lipscomb and Vaughn, graduate and/or head to the NFL Draft. This team will have to replace a few key players that have transferred as well, including these two on the offensive side of the ball:

Senior offensive tackle Devin Cochran has decided to enter the transfer portal after announcing his decision on Twitter on Jan. 6. Cochran’s departure will be a big loss for Vanderbilt, as he was a staple on the offensive line, starting 32 games during his time in Nashville.  He has been a force on Vanderbilt teams that beat Tennessee twice and made the Academy Sports + Outdoor Texas Bowl in 2018. Cochran is viewed as a potential 2021 NFL Draft selection.

Quarterback Mo Hasan, a redshirt junior, has entered the transfer portal with one year remaining of eligibility despite being unclear if he will ever play football again. Hasan will most likely be best remembered for his winning performance against No. 23 Missouri, his first career start, in which he completed 7-of-11 passes for 120 yards and one TD before being knocked out of the game due to a helmet-to-helmet hit.

Unfortunately for Hasan, that was his only start of the season. Off the field, Hasan founded Second Spoon, a food truck dedicated to providing fresh meals to those in his community. If healthy, Hasan could have potentially been the starter, but Vanderbilt will now look to either its incoming freshmen or Wallace to lead the offense.