An in-depth look at Vanderbilt’s leading scorer as he looks to carry his hot shooting start into conference play tonight against Auburn. 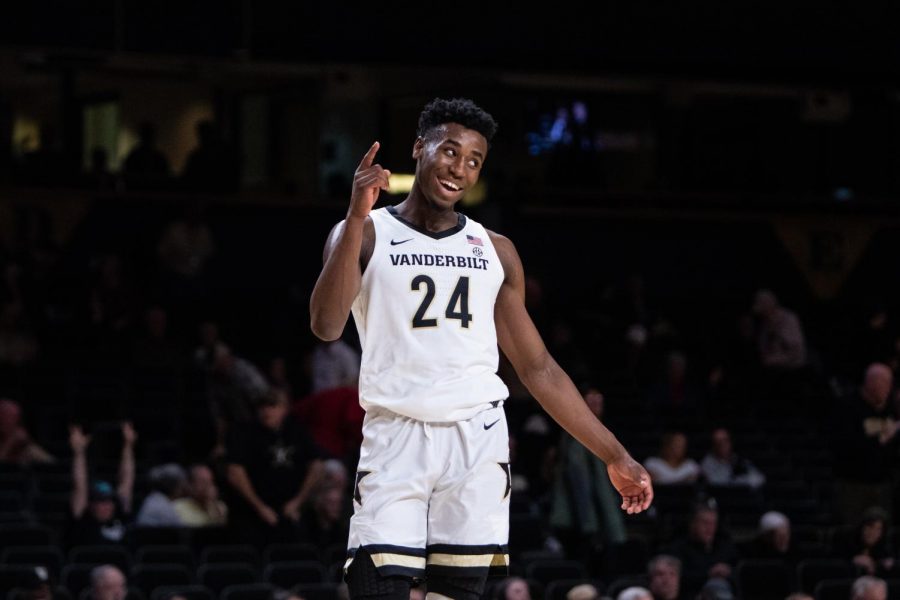 Going into the 2018-2019 Vanderbilt basketball season, there was a lot of excitement surrounding the incoming freshman class.

Students were heavily awaiting the debuts of five-star recruits Darius Garland and Simi Shittu, who seemingly would make an immediate impact and help a promising Vanderbilt basketball team reach levels of success it hadn’t experienced in several seasons.

Obviously, that did not go according to plan.

Just a few games into the year, Garland took a hard fall on a layup and tore his meniscus. The team, which revolved around Garland’s passing and scoring capabilities, was simply not able to recover, and failed to pick up even a single win against SEC opponents. After the season, Garland and Shittu declared for the draft, Head Coach Bryce Drew was fired and it was back to square one.

However, during the season, it became clear that freshman forward Aaron Nesmith had the potential to be a crucial piece in the upcoming years. Often overlooked as the third wheel to Garland and Shittu, Nesmith registered a promising freshman campaign, averaging 11 points and 5.5 rebounds in 29 minutes of action. By midseason, he had become the go-to offensive option for the Commodores, showing flashes of being a high-volume scorer – most notably, in his 24 points on 9-15 shooting in an exciting overtime loss against the top-ranked Tennessee Volunteers. Despite the loss, it was clear that Nesmith was trending in the right direction.

Even with his late season surge, no one expected Nesmith to put up the numbers he has thus far in his sophomore season.

Statistically, he is having one of the best seasons of any player in college basketball.

At the end of non-conference play, Nesmith is averaging 23.4 points to go along with 4.7 rebounds per game in nearly 36 minutes. He has knocked down more than half of his three-point attempts, shooting 51.4 percent from beyond the arc on 8.4 shots per contest.

His 23.4 points per game ranks fifth in the nation and first in the SEC. Not only does he lead the conference in scoring, but the difference between him and Mason Jones – the Arkansas guard averaging the second most points in the SEC (19.5) –  is the same as the difference between Jones and the tenth highest scorer in the conference, who happens to be fellow Commodore Saben Lee.

But what makes Nesmith so impressive as a scorer isn’t just his output; it’s his efficiency. He ranks 11th in the nation with a 69.2 true shooting percentage, a more accurate efficiency metric that takes into account the value of each shot. His 51.4 percentage from deep makes him the 17th most efficient three-point shooter in the country. He’s shooting at a higher volume than all players ranked ahead of him, having attempted 109 threes in 13 games. The only other player in the country shooting this hot on that many attempts is McNeese State guard Dru Kuxhausen, who has attempted 119 threes and drained 61 of them. Nesmith’s 56 makes are tied for fourth in the country, and of all players who have been used in over 20 percent of the team’s possessions, Nesmith has the fourth best offensive rating (129.2). He is also a more complete scorer than the majority of three-point snipers, shooting 51.2 percent on 2-point attempts.

No matter how you look at it, the season that Nesmith has had so far is unlike any Vanderbilt has seen in years. John Jenkins – a former five-star recruit in his own right – impressed SEC fans as a freshman by shooting 48.3 percent from deep, but even that is less efficient than Nesmith, who has already attempted nearly as many threes as Jenkins did all season. He’s become a team leader on both sides of the ball, and is scoring at an elite volume and efficiency.

However, basketball isn’t played on a stat sheet. There is much more to scouting and analyzing performance than looking at numbers and analytics. Fortunately for Nesmith, he absolutely passes the eye test which offensive statistical outliers often fail.

Listed at 6’6”, Nesmith is a physical shooting guard/small forward hybrid who has legitimate NBA size, strength and touch both beyond the arc and around the rim. He can rebound and defend multiple positions. His 6’10” wingspan is difficult for defenders to beat, and he uses his physicality and quick hands to make scoring on him a challenging task.

There’s a good chance that, come June, Aaron Nesmith will hear his name called in the first round of the 2020 NBA Draft. His game is a perfect fit for the modern NBA, in which shooting from beyond the arc is a top priority for all players, and even if his shot creation does not improve at the next level, he can at least bank on finding himself in a system where he can be a reliable three-and-D guy. Mock drafts routinely have him as a mid-first round prospect, and he continues to climb draft boards on an almost weekly basis.

Whether or not Nesmith can maintain his level of production as the SEC schedule begins remains to be seen. History tells us that his 51.4 percent clip from range on over eight attempts isn’t sustainable for a full season, but even a noticeable drop-off would keep him amongst the best shooters in the country.

For now, he has a whole lot of season left, so enjoy it, Commodore Nation. Perhaps the best shooter in the country plays at Memorial Gym.