SCHULMAN: Stop worrying so much about job recruitment

The numbers don’t lie: Vanderbilt students are set up for financial success; you should remember that when your first-choice option rejects you. 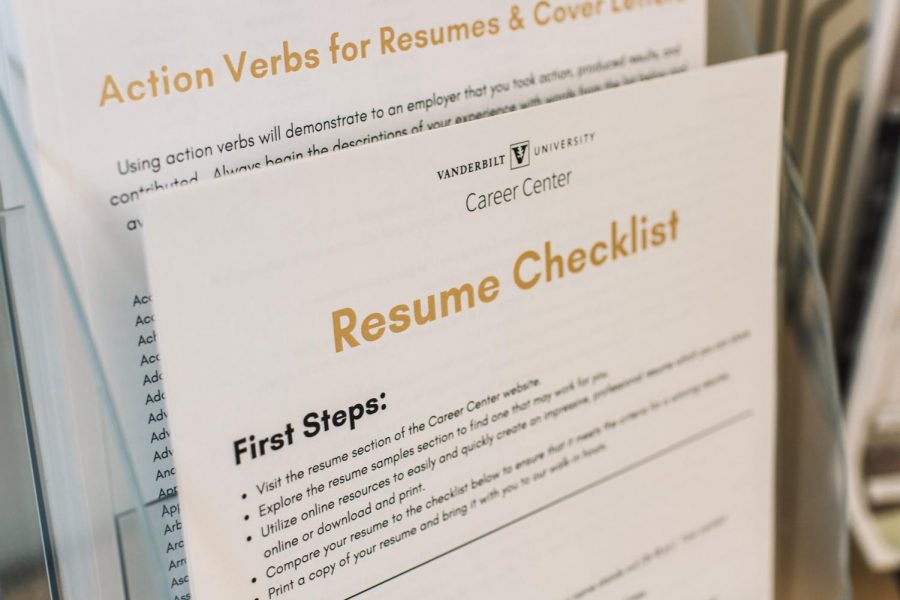 Resume checklist at the Career Center

Junior year has been a reality check for me. As a political science major, I’ve been faced with the daunting task of sorting out my career path. Do I go to law school? If I go at all, should I enter the workforce first or head there right after college? If I go into the workforce, do I start on Capitol Hill? Grassroots campaigns? Some kind of mix of the two? Either way, I’ve had to spend a lot of time thinking about my future.

Thankfully, my process is as private as I want it to be. The acts of buying LSAT textbooks, applying for jobs and working on my GPA don’t draw attention to me. But that’s not true for a lot of students at Vanderbilt. For the better part of the fall semester for juniors and seniors, prospective consultants, investment bankers and programmers flock from meeting to meeting in suits and dresses. They fly out to big cities for interviews. And when the results come out, there are always whispers: Did you hear so-and-so got a summer position at Bain?

As a result, many of my friends have expressed their anxiety about searching for jobs. It even extends down to more career-oriented sophomores and first-years and their summer internships. They feel like they’re not doing as well as they should, that they should have a job right now because they’ve worked so hard – after all, their classmates are doing the same things and getting amazing offers. But there is good news: such angst doesn’t comport with reality.

If you’re on track to graduate, you are likely to be much better off than the vast majority of Americans. The average salary of a Vandy student ten years after graduation is $83,100. That’s more than twice the annual income for the average American, which is $31,177. When we shift the goalposts to compare our earnings to those of other colleges, the pattern still holds: the median starting salary for Vandy grads is $56,300, or about $10,000 more than the average American college graduate. Even if you’re just an average student, you’re likely to be in a much more secure financial situation than the vast majority of the country. Unfortunately, statistics like these aren’t as mentally available as the networking sessions and the phone calls and the good news that isn’t about us.

I get it – it’s hard to avoid comparing yourself to the most successful person you know. Transitioning to the real world is scary, and you just want the best for yourself. But if you take a second and focus on your projected wellbeing, and not on relative accolades, you’ll realize that you have a lot going your way.