Lee and Nesmith lead Commodores as they escape at home 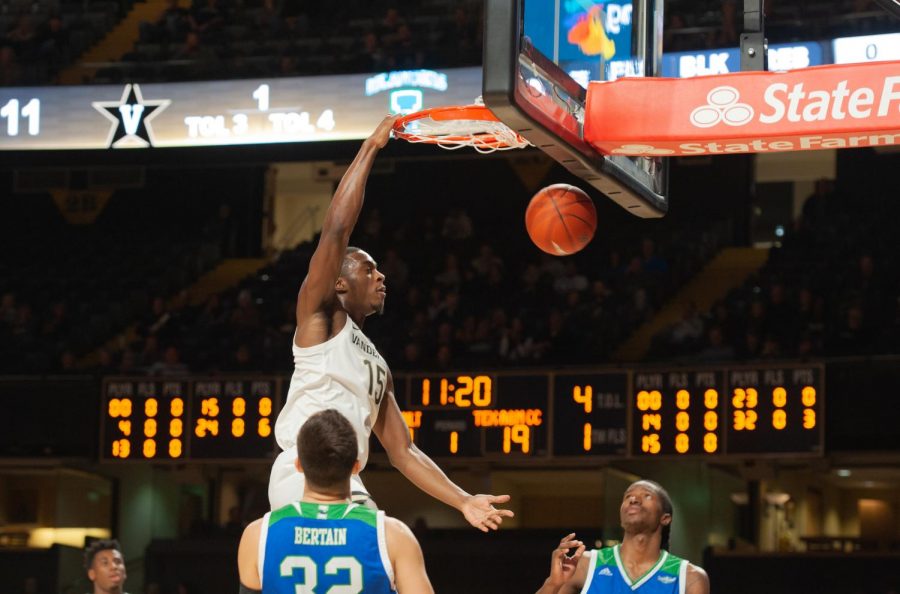 Head coach Jerry Stackhouse summarized his team’s performance as having some positives and negatives:

“We did some good things offensively but we were careless a little bit too,” Stackhouse said. “It was kind of a 50-50.”

The Islanders got off to a hot start, as they hit five of their first seven three point attempts and entered the half up by two. Junior guard Myles Smith led the Islanders with 11 points at the half.

Throughout the first half, freshmen guard Scotty Pippen Jr. was able to get into the paint against the Islanders’ defense, but seemed hesitant to shoot both once getting into the paint and when spotting up behind the three point line. Pippen’s lack of aggressiveness was emblematic of the Commodores’s offense during the first half, as many of the team’s eight turnovers were due to overpassing.

In the second half, the Commodores went back into their standard man-to-man defense, but with a significantly higher level of intensity. Lee came off of the bench in the second half and helped spur the Commodores offense. After a slow start in the first half, Lee paced the Commodores with nine points and six assists in the second half. Lee was able to penetrate the Islanders’ zone defense both for easy baskets for himself in the paint and to create easy looks for his teammates. Senior forward Clevon Brown was the beneficiary of Lee’s shot creation, as he threw down four dunks in the second half. Coach Stackhouse described the balance that he is hoping Lee will achieve this season: “I don’t want him to not score the ball but I have challenged him to try to lead the SEC in assists.”

After the Commodores opened up their largest lead of the game 63-55, Islander forward Nolan Bertain hit a corner three and was fouled by Nesmith to cut the Commodores lead in half. While the Commodores defense carried their strong finish to the first half into the second half, careless turnovers prevented the Commodores from pulling away. At the 3:46 mark, Islanders’ forward Elijah Schmidt hit two free throws to bring Texas A&M Corpus Christi within two points of a tie.

With the game in the balance, the Commodores were able to make the big plays they needed to in order to prevail. Nesmith hit a clutch three pointer with 3:24 to go and then drew a charge with 1:19 to go. On the ensuing possession, Pippen Jr. was able to break down the defense and kick to Saban Lee for what appeared to be a game-clinching three pointer. However, Lee missed a one-and-one and Islanders’ guard Jashawn Talton hit a three to cut the Commodores lead to three with 4.1 seconds to play. Nesmith closed it out at the free throw line with his team-leading 20 and 21st points.

Though the Islanders proved to be a tougher test than expected at Memorial Gym tonight, Coach Stackhouse pointed out that his young team with benefit from the experience of playing in a tight game.

“You can never have enough experience,” Stackhouse said. “That’s what we’re trying to gain.”