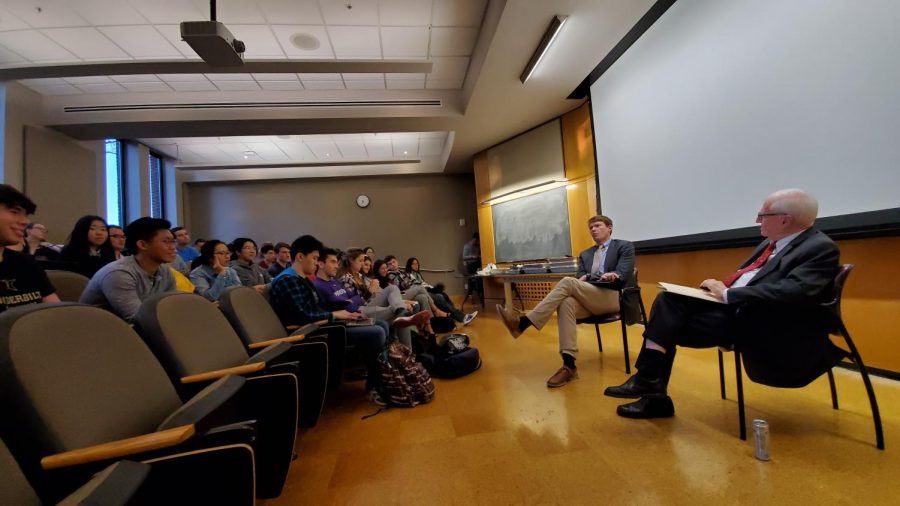 The American Enterprise Institute (AEI) and Vanderbilt Global China Connection cosponsored an event about the history and future of U.S.-China trade relations on the evening of Nov. 4. The moderated discussion included Claude Barfield—a former agent within the office of the U.S. Trade Representative, an executive office that advises the president—and Timothy Meyer, a Vanderbilt Law Professor. U.S.-China trade relations are relatively contentious presently, as the two countries have recently cancelled a series of mutual tariffs and escalated negotiations about a potential trade resolution.

AEI is a national think tank based in Washington, D.C. that employs students and professionals alike to research government, politics, economics and social welfare. Sophomore Jacob Schroeder, the chair of the AEI Executive Council at Vanderbilt, moderated the discussion, asking a series of questions ranging from the role of the World Trade Organization in the trade war to the implications of Chinese 5G technology.

The Vanderbilt AEI Executive Council chose Barfield and Meyer with the intent of introducing two contrasting views on trade to the discussion, with Barfield a historically strong proponent of free trade and Meyer somewhat more of a protectionist. Absolute free traders oppose any restriction on foreign imports whatsoever whereas protectionists support certain degrees of restriction largely in the interest of protecting domestic industries and jobs.

However, Professor Thomas Schwartz, the faculty advisor to the AEI Executive Council, understood the two speakers’ stances to be less polarized than anticipated.

“I think that they may be closer together politically than we hoped,” Schwartz said. “It’s hard to get an academic to come in and support Trump’s protectionist policies.”

In fact, the AEI Executive Council originally hoped to host Ganesh Sitaraman—a Vanderbilt Professor of Law and longtime advisor to Senator Elizabeth Warren—but he was unable to attend the event.

Despite the overlap between the two speakers’ political backgrounds, the discussion, titled “Trade Wars: A Conversation on China Trade Policy,” introduced a diverse array of viewpoints about why the U.S. must continue to take action against China and how the U.S.-China trade war might end. A major point of emphasis between the two speakers was how China’s history of intellectual property theft, its resistance to democratization and its strict regulation of non-Chinese businesses necessitated that the U.S. and its allies attempt to change China’s behavior.

Although the event did not require a ticket, a vast turnout limited the number of available seats in the Buttrick 101 lecture hall.

In addition to a large number of audience members, the discussion received overwhelmingly positive feedback from students.

“I’m a freshman, so it was my first time attending this kind of event” first-year Iris An said. “I thought it was a really cool and interesting discussion.”