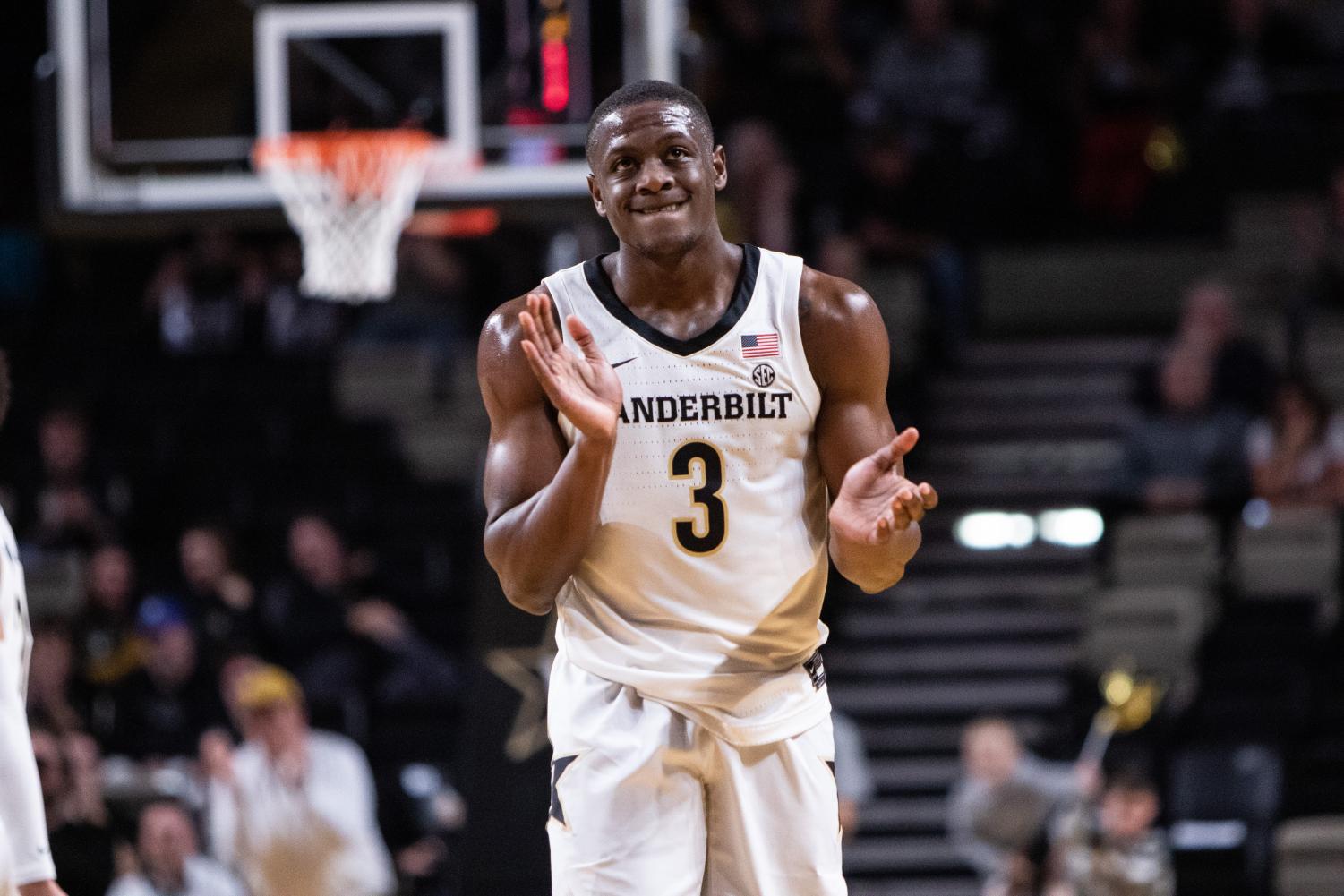 Vanderbilt defeated Southeast Missouri State on Wednesday night to win its first game of the season.

In with the new: Vanderbilt’s win shows promise with Stackhouse at the helm

With an opening night victory over Southeast Missouri State, Vanderbilt can finally put last year to rest and focus on what's ahead

After 310 days, 20 consecutive losses, a fired head coach and five players gone from the program, Memorial Magic has finally crept its way back on to West End.

In the first game of the Jerry Stackhouse era, the Commodores used a late second-half run to down Southeast Missouri State 81-63 and earn their coveted first win of the season. Sophomore guard Aaron Nesmith led the way with 25 points on 8-12 shooting and junior guard Saben Lee chipped in 21 points of his own off the bench.

It was the start to the season that fans — who packed the seats of Memorial Gymnasium to see the new-look Commodores — needed after an abysmal season a year ago. Coach Stackhouse made sure to bury the thought of last year in his postgame press-conference.

Stackhouse is an NBA coach turned college coach, and the NBA influence ran through the veins of the Commodore game plan on Wednesday night. Vanderbilt took 61 shots, 34 of which came from three, and both halves were nearly identical in terms of shot selection. The first half saw the Commodores shoot 17 of their 30 shots from three, while the second half saw them shoot 17 of their 31 shots from deep. The only difference was that they started to fall in the second.

Of course, this is the way basketball has evolved over the past few years. “Moreyball,” the play-style aptly named after Houston Rockets general manager Daryl Morey, emphasizes threes and layups over mid-range shots, and if one game is any indication, Stackhouse seems to buy in. It certainly helps to have a player like Nesmith, who can take advantage of this game plan. Nesmith was on fire throughout Wednesday’s contest, nailing 7 of his 11 three-point attempts. He only took one shot that wasn’t from downtown, converting on a contested layup. It’s clear that Nesmith is going to be the focal point of the offense this year. Stackhouse said so in no uncertain terms after the game, and if he shoots like he did against Southeast Missouri State, it’s definitely warranted.

Often lost in the conversation about last season’s three-man recruiting class, Nesmith is starting to show that he was really the gem of the group and will be the face of the Commodores for the foreseeable future. The 6’6″ sophomore has gotten some NBA buzz leading up to this season, and currently sports a more muscular frame in preparation for taking on an increased workload. He showed his prowess on the defensive end as well with a highlight block that became ubiquitous for him last season.

When the PA announcer called out the Vanderbilt starting lineup amidst a new and improved light show and a wildly entertaining hype video, one thing was missing. Commodore fans have become used to hearing Saben Lee’s name called with the starters, watching him shuffle down the line of bench players in their warmups, giving his high fives before taking his spot on the floor for the jump ball. On Wednesday, Lee found himself standing in that line and, subsequently, on the bench to start the ballgame. It was a change of pace for a guy who has started 61 of his 64 career games for Vanderbilt, and one that sparked a lot of questions. Stackhouse was quick to explain his reasoning.

“Hopefully I’m gonna explain this and I’m not gonna have to continue to explain this over and over again. The fact of the matter is, our two best scorers, our 1A and 1B scorers, are Aaron Nesmith and Saben Lee. I want to try to stagger those guys,” Stackhouse said. [Lee] can come off with maybe our best scorer in the second unit scoring against the other team’s second unit.”

That’s exactly what happened against the Redhawks. Lee came into the game after just five minutes of action and immediately made his presence known. The 6’1″ junior scored on his first possession after checking in before dishing an assist to Nesmith on his second. Shortly after, Lee was able to get to the line and finish at the rim on consecutive offensive sets. On a night where Vanderbilt continued to fire from deep, Lee was finding driving lanes and converting inside, even throwing down one of his signature slams over the entire Southeast Missouri State defense.

There’s certainly a lot of new faces with this Vanderbilt team. Stackhouse brought in a recruiting class of four guys that all got time in the team’s opener. None, however, looked incredibly impressive out of the gate. Of course, one game is one game and nerves are expected in that sort of environment, but the veterans really ran the show for 48 minutes. Scottie Pippen Jr., who has been Stackhouse’s pet project at point guard for most of this offseason, struggled to rotate defensively and didn’t seem to get into a rhythm offensively, despite his team-high six assists. Forward Dylan Disu found himself too far from the basket on several occasions and finished the game 0-5 from the field. Center Oton Jankovic and guard Jordan Wright didn’t attempt any field goals and committed more turnovers and fouls than points and rebounds.

Stackhouse didn’t seem concerned, and frankly, he shouldn’t be. Pippen Jr. looks the part of a starting point guard if he can get more experience under his belt. Disu showed stretches where he protected the rim defensively. The others didn’t play enough minutes to really make an impact.

Luckily, the veterans on the roster picked up the slack. In addition to Nesmith and Lee, forward Clevon Brown chipped in for 15 and 8 on a surprising 3-4 from beyond the arc. Junior guard Max Evans and redshirt junior forward Matthew Moyer showed their defensive acumen, the latter of which took three charges and blocked two shots. If the freshmen can live up to the hype, this will be a deep team that can surprise some people this season.