In a visit to Vanderbilt for the Chancellor’s Lecture Series, Goodwin talked leadership and politics with Professor Jon Meacham 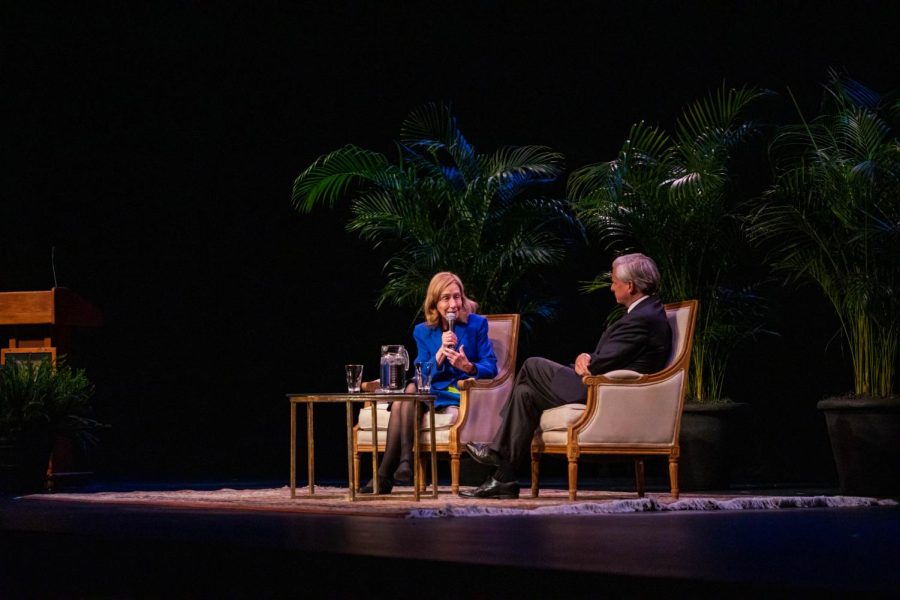 Members of Vanderbilt’s community filled Ingram Hall to listen to the two historians. In a Q&A style discussion, Meacham asked Goodwin questions about her books, her past experiences and her opinions about the current political climate. After the lecture, Goodwin and Meacham received a standing ovation from the audience.

A graduate of Colby College and Harvard University, Goodwin received a prestigious position as a White House Fellow in 1968 under President Lydon Johnson. In her lecture, Goodwin recalled that her job was almost jeopardized when an article she wrote, titled “How to Dump Lyndon Johnson,” was published days before she was due to start. According to Goodwin, Johnson replied “If I can’t win her over, no one can.” Goodwin and Johnson became close and after the end of Johnson’s presidency, Goodwin assisted in drafting his memoirs.

Goodwin has published biographies on multiple presidents, including Abraham Lincoln, Theodore Roosevelt, Franklin D. Roosevelt and Lyndon Johnson. In her discussion with Meacham, Goodwin explained why she has spent so many years studying these four presidents.

“They are truly my guys,” Goodwin said. “I’ve lived with them so long that they’ve become my friends.”

In an interview with The Hustler, Goodwin spoke about how she picks the subjects for her biographies. According to Goodwin, she writes about topics previously overlooked by the numerous biographies written about each of these famous presidents. She also chooses leaders she admires and wants to think about on a daily basis.

“I have thought about them before going to bed at night and then again when I woke up,” Goodwin said. “I could never write about Stalin or Hitler. I study periods of time I want to live in again and the people I want to be by my side.”

When asked by The Hustler how Goodwin evaluates presidents and leaders, she emphasized the need to do so through a non-partisan lens. Presidents should be judged through a leadership index with emotional qualities, such as humility, empathy and resilience, Goodwin said. According to Goodwin, good leaders reduce partisan anger and bring the country together.

“The moral fiber of a leader is the ultimate standard we should look for today,” Goodwin said.

In the lecture, Meacham asked Goodwin about her views on the current polarized political climate in the United States. Goodwin examined examples from American history to answer his question.

“One thing history provides is the proof that we’ve lived in more troubled times before,” Goodwin said. “Some things seem unprecedented, but we can have solace that history shows we have gotten through them.”

In her interview with The Hustler, Goodwin also spoke about the role that social media and the 24/7 news cycle plays in politics. The internet has the ability to mobilize citizens and increase civic participation, but internet culture makes it harder for a leader to make a complete appeal to people at large, according to Goodwin. She cited Roosevelt’s fireside chats during World War II as an example of effective national communication since the vast majority of American citizens listened to these broadcasts.

At the end of the lecture, Meacham asked Goodwin what qualities a future president should have. A good leader should have the ability to heal divisions and unite Americans, Goodwin said. Goodwin claimed that she is optimistic about the future of America’s leadership.

“History suggests there’s something special about this democracy,” Goodwin said. “We’ll come through this.”